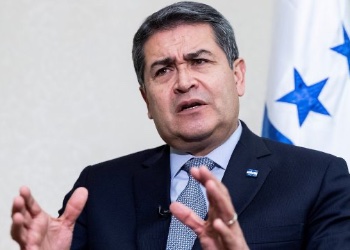 The latest accusations against Honduras President Juan Orlando Hernández are the most damning yet and add further weight to his alleged role as a co-conspirator in his brother’s drug trafficking ring, but it still remains unlikely that the United States will indict the head of state.

On April 30, US Attorney Geoffrey Berman announced charges against one of the most powerful policemen in Honduras, Juan Carlos Bonilla Valladares, also known as “El Tigre,” saying he had “abused his positions in Honduran law enforcement to flout the law and play a key role in a violent international drug trafficking conspiracy” for almost 20 years.

Berman alleged that the former police chief protected cocaine shipments “on behalf of” President Hernández and his brother, Tony, a former congressman who was convicted of drug trafficking charges in October 2019. Bonilla exploited his role in the National Police force to “facilitate” the safe passage of multi-ton loads of cocaine bound for the United States and used “violence, including murder,” to protect the “politically connected drug traffickers he aligned with,” which included the president and his brother, according to an April 29 criminal complaint.

In a press release, Berman said Bonilla operated directly on behalf of President Hernández and his brother “to further the [drug trafficking] conspiracy.”

President Hernández denied the allegations in a statement, calling them “100 percent false” and that “accusations made by confessed drug traffickers are not accurate.”

Bonilla also denied all of the latest charges and having any connection to drug traffickers or the Hernández brothers in a lengthy interview with the local media outlet Noticiero Hoy Mismo. If convicted, he faces between a minimum 10-year sentence and a maximum life sentence in prison.

The former police chief has long attracted controversy. Bonilla’s appointment to the post in 2012 by then-President Porfirio Lobo was widely criticized for Bonilla’s shady human rights record, which included accusations he formed part of a death squad. Despite this, US security aid continued to flow to units operating under his command before he was eventually removed from the role in 2013, just before Hernández first became president.

In an unexpected move, the Honduran Attorney General’s Office announced May 2 that Bonilla is also being charged with laundering 20 million lempiras (some $800,000), according to a report from El Heraldo. If indicted in Honduras, Bonilla cannot be extradited to the United States until he faces those charges at home.

The charges against Bonilla are the most detrimental yet for Juan Orlando Hernández, allegedly linking the Honduran president to murders committed under his watch and adding to allegations that he ran a drug trafficking organization with his brother. But while the accusations against him keep piling up, it is far from certain whether it will make a difference.

For the time being, Hernández is all but untouchable due to presidential immunity. The United States does not traditionally indict sitting or former heads of state, though there are notable exceptions, such as current Venezuela President Nicolás Maduro and former Panama president Manuel Noriega.

The Southern District of New York could be paving the way to indict Hernández once he leaves office in 2022, barring any attempt by him to seek a third term and provoke another constitutional crisis. Hernández could also extend his immunity by joining the Central American Parliament (Parlacen), of which all presidents can become honorary members after leaving office.

For now, the evidence “establishes his close ties with violent drug traffickers,” Dana Frank, a professor at the University of California, Santa Cruz, told InSight Crime in an email.

The complaint alleges that Tony Hernández and President Hernández, who is identified only as CC-4, “helped Bonilla advance his position within the Honduran National Police” while Juan Orlando was the head of congress between 2010 and 2013. In return, Bonilla “protected their drug trafficking activities,” according to the complaint.

SEE ALSO: The US Drug Trial Evidence That Could Topple the President of Honduras

Bonilla was so “highly trusted” by President Hernández and his brother that the two tasked him with “special assignments, including murders,” according to the complaint. This included a rival trafficker who Tony allegedly said “needed to be killed” after he had prevented him from moving cocaine shipments into Guatemala through Santa Rita municipality in western Copán department, according to a criminal witness identified as CW-1.

Though unnamed, the witness is presumed to be former El Paraíso mayor Amílcar Alexander Ardón Soriano, who pleaded guilty to drug and weapons charges and has been cooperating with the US Drug Enforcement Administration (DEA) with the hope of receiving a lighter sentence. Ardón had previously mentioned Bonilla’s alleged role in the drug trafficker’s murder during Tony Hernández’s trial. Ultimately, Bonilla “was able to coordinate [the] murder,” according to information from Ardón in the April 29 complaint.

In essence, US prosecutors allege that President Hernández, who has aggressively denied allegations tying him to the drug trade, didn’t just have a brother operating an international drug trafficking conspiracy. Rather, US authorities suggest he was coordinating with him, leveraging his ascent through the ruling National Party’s ranks to facilitate their cocaine trafficking activities.

As the embattled president’s ties to outright criminal activity grow clearer, these latest allegations come as little surprise and likely won’t have much impact. Claims that President Hernández provided official protection to a drug lab producing between 300 and 500 kilograms of cocaine per month only briefly caught headlines in March of this year before fading away.

Despite the many drug trafficking allegations by US prosecutors, President Hernández has managed to forge a strong relationship with the United States, especially the administration of President Donald Trump, with which he has cooperated on controversial agreements to accept asylum seekers sent back from the United States and moving the country’s embassy in Israel from Tel Aviv to Jerusalem.

“Despite all the overwhelming evidence of Hernández’s vast crimes, the United States continues to celebrate him as a wonderful partner and fund his corrupt security forces,” said professor Frank, whose 2018 book, “The Long Honduran Night,” touched on Bonilla’s notorious law enforcement career in Honduras.

*This article was written with assistance from Héctor Silva Ávalos.