Mitch McConnell Reportedly Threatened President Trump: “If You Pardon Julian Assange, We are Much More Likely to Convict You in an Impeachment Trial” (VIDEO)

WATCH: “Why Are You Allowing This To Happen,” Trump Supporter Yells At Capitol Police for Standing Around While Protestors Are Storming Capitol (VIDEO) 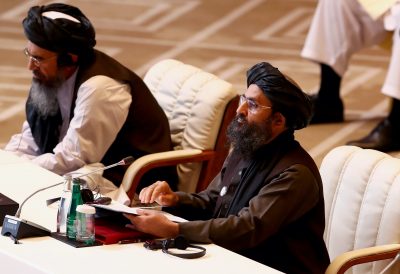 The talks between the Taliban and the Kabul regime that began on 12 September are on hiatus over disagreements about how to frame a code of conduct to guide the talks. Their differences over the procedures are wide and demonstrate how difficult substantive negotiations will be. It is only after a framework is agreed to that the two sides might tackle a ceasefire, governance, power-sharing and a host of other difficult issues.

Seeking to build support for a ceasefire while negotiations continue, Afghan President Ashraf Ghani arrived in Doha on 5 October seeking Qatar’s good offices in lobbying the Taliban for flexibility over the ceasefire, power sharing and other knotty issues. Earlier, Chairman of Afghanistan’s High Council for National Reconciliation Abdullah Abdullah visited Pakistan for a similar purpose. Underscoring Pakistan’s central role in the peace process, he asked Pakistan’s powerful military to use its influence to press the Taliban to reduce violence.

The Taliban has evolved from a ragtag group of resistance fighters to a formidable force. They have crafted clear positions and did not concede much ground on their fundamental objective of driving what they believe to be occupation forces out of Afghanistan. They also refused to talk to the Kabul regime, who they brand as ‘American puppets’, and only acquiesced to an intra-Afghan dialogue representing ‘Afghan groups’.

Once the format for negotiations is agreed, the focus will remain on the nature of the state, power-sharing arrangements and how the government is to be sustained. Issues that Western groups or the Kabul regime consider important — including the status of women and fundamental rights — are at best secondary for the Taliban. Reaching a ceasefire is most important for Kabul, but is least important for the Taliban as they do not want to concede their battlefield advantage.

For the Taliban, Islam guides state ideology and Sharia as represented by the Hanafi school will be the ‘operative framework’ to run the affairs of state. For Kabul, the country is sufficiently Islamic and already has a constitution that holds Islamic law above others, which allows it to turn its focus toward protecting women’s rights, freedom of expression and electoral democracy.

The Taliban understand that puritan application of Islamic injunctions during their previous regime in the late-1990s alienated them from virtually all countries — only three countries in the world recognised them. Their actions since indicate that they may be ready for compromises in certain areas. In a break from their previous government policies, they now allow girls to attend schools in areas under their control.

With their struggle against the US-imposed system that it argues does not align with Islamic values, the Taliban leadership cannot afford to acquiesce to the dilution of the Islamic content in the agreement. But they do seem more inclined to let the system evolve rather than imposing their wishes through a state diktat. Their clear objectives, internal organisation and support from communities indicate that they are better prepared for governance this time around.

Whether the interlocutors agree to an interim arrangement prior to a new power-sharing arrangement remains the most intractable issue. And here lies the dilemma for the Taliban political leadership. Having engaged the most powerful military for two decades and compelling them to seek exit, no Taliban interlocutor can afford an agreement without a lion’s share of power.

The rank and file who gave their lives and limbs for the principle of driving the ‘occupation forces’ out will be loath to leave authority in the hands of those they perceive to be ‘American puppets’. Hoping for a ceasefire is therefore a pipe dream. The Taliban are captives of their battle-hardened psychological makeup that anything less than total victory is surrender, which endangers the movement’s unity.

The alignment of political positions on either side is likely to be slow. There will be stalemates or even walkouts in frustration. Pushing the interlocutors to hasten process will produce results that either side may not to be fully committed to hold. External powers should let Afghan interlocutors move at a pace they are comfortable with in order to arrive at a durable peace.

US attempts to export democracy have often carried deadly consequences. There are several failed and costly experiments including Vietnam, Iraq, Libya and Afghanistan — countries where people belong to a different culture and different faith. It is time that Western powers realise that attempts to introduce democracy from above will not always help establish a better governance system for people with a totally different history, religion and culture. A peaceful transition in Afghanistan will only hold if it is supported by the conservative elements who hold sway over Afghan society.

Sajjad Ashraf was an adjunct professor at the Lee Kuan Yew School of Public Policy, National University of Singapore from 2009 to 2017. He was a member of the Pakistan Foreign Service from 1973 to 2008.

by The Daily US News January 20, 2021Comments Off on BREAKING: President Trump Formally Declassifies Large Trove of Russiagate Documents Over Objections From FBI Director Wray

Mitch McConnell Reportedly Threatened President Trump: “If You Pardon Julian Assange, We are Much More Likely to Convict You in an Impeachment Trial” (VIDEO)

January 20, 2021Comments Off on Mitch McConnell Reportedly Threatened President Trump: “If You Pardon Julian Assange, We are Much More Likely to Convict You in an Impeachment Trial” (VIDEO)

WATCH: “Why Are You Allowing This To Happen,” Trump Supporter Yells At Capitol Police for Standing Around While Protestors Are Storming Capitol (VIDEO)

January 20, 2021Comments Off on WATCH: “Why Are You Allowing This To Happen,” Trump Supporter Yells At Capitol Police for Standing Around While Protestors Are Storming Capitol (VIDEO)

Nixon, Rabin and Trump: Unfinished Business In The Middle East