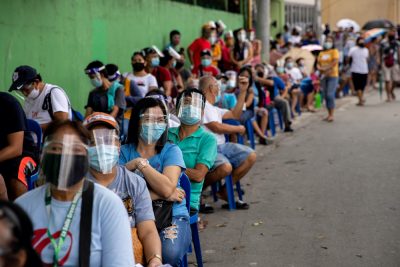 In October 2019, the International Monetary Fund (IMF) projected that the Philippine economy would grow by 6.2 per cent this year. It grew by an average of 7.5 per cent annually between 2014 and 2019. Living standards also considerably improved — the proportion of Filipinos living under the national poverty line of about US$225 per month for a family of five declined from 23.5 per cent in 2015 to 16.7 per cent in 2018.

Tough virus containment measures have ground the economy to a halt. In the first quarter, GDP contracted by 0.7 per cent — the first time it went negative since 1998. The contraction persisted into the second and third quarters, with GDP down by 16.9 per cent and 11.5 per cent respectively compared to corresponding quarters in 2019.

The most recent IMF outlook projects GDP in 2020 to contract by 8.3 per cent. Philippine President Rodrigo Duterte’s economic managers expect the economy to contract between 8.5 and 9.5 per cent.

In the Philippines, social distancing and lockdown policies are not well nuanced. Contact tracing protocols have not improved as much as testing and treating. Leadership is lacking, with several members of the Inter-Agency Task Force only focusing on controlling people movement. There are also massive communication gaps in policy: some government and police officials went unpunished for violating protocols, while several people were arrested for not wearing masks.

During the long lockdown, public transport was curtailed and intercity travel prevented, disrupting domestic value chains. Even after the lockdown began to ease in June, excessive permits were required and rules were not uniformly implemented across locales.

Getting the economy back on track will be difficult given that infections continue to rise. As of 20 December 2020, there are over 459,000 cases. Nearly two-thirds of the infected are aged 15 to 44 years old, while half of COVID-19 deaths are among those 65 and over. This differs from eight months ago when about a third of infections were among people aged 15 to 44 years old, and a quarter were elderly.

The Philippines’ four-pillar policy response to the pandemic provided social protection support to the vulnerable, including displaced and overseas Filipino workers, and an emergency cash aid program. It also expanded resources for frontline medical workers, fiscal measures such as credit guarantees for small businesses and monetary measures. To create more liquidity, policy rates were reduced five times throughout 2020. In September, a law was enacted to provide additional fiscal support for hard-hit sectors such as agriculture and services, including transportation and tourism.

While there is consensus that the monetary response has been sufficient, there are concerns that banks are being too conservative in their lending. The overall fiscal response is 6.4 per cent of 2019 GDP — higher than the median fiscal stimulus package of 2.8 per cent in Asia Pacific countries, but lower than the 21 per cent spent by Japan, the 14 per cent spent in Bhutan and Iran and the 10 per cent spent in India.

Some point out that the fiscal policy response has been timid, especially as only 44 per cent of the package (or 1.9 per cent of 2019 GDP) has been used for health and social protection. Economic managers argue that they adopted a balanced response.

The 2021 government budget is funding its way out of the crisis through continued improved infrastructure investments. But the budget gives a lower spending priority to health and social welfare over national defence and the maintenance of peace and order. The government is also preparing to enact legislation to reduce corporate taxes and rationalise incentives, but some economists warn about the poor timing of the initiative, aside from weak state capacity to implement such complex reform.

Despite varying views on the adequacy of the fiscal policy response, there is unanimous agreement that a successful economic recovery hinges on the proper management of the health crisis, which the government is still struggling to achieve.

Yet Filipinos continue to hold their President in high regard — Duterte’s approval ratings are higher than they have ever been, indicating that theatrics readily beats performance in an age of populism and social media.

This article is part of an EAF special feature series on 2020 in review and the year ahead.