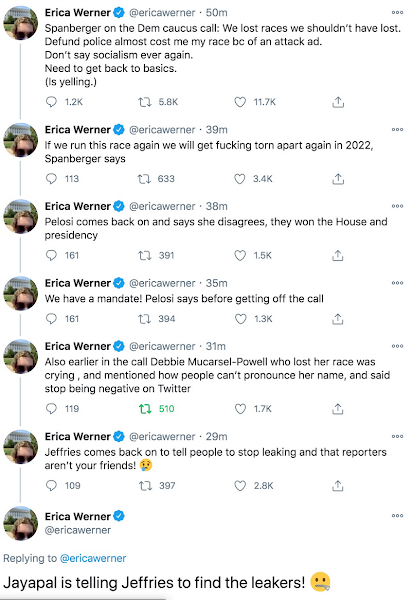 Moderate House Democrats lashed out at their liberal colleagues Thursday, using a marathon caucus-wide conference call to bash progressives for advancing an agenda that, the centrists said, cost the party a number of seats in Tuesday’s elections.
An impassioned Rep. Abigail Spanberger, who squeaked to victory in central Virginia, took liberals to task for promoting the policy of redirecting funds away from police departments, an idea that took off following the death of George Floyd in May — and that Republicans used on the campaign trail to hammer Democrats with charges of nurturing crime.
Spanberger called the Democrats’ campaign strategy “a failure.” “I do disagree, Abigail, that it was a failure,” Speaker Nancy Pelosi (D-Calif.) interjected. “We won the House.”
WNU Editor: As I had said in my previous post. The Democrats are on the verge of winning the White House with Presidential vote numbers that are unprecedented. They still have a huge majority in the House. Are short by only two Senate seats to control the Senate. And they are not happy. In fact they are angry.
OMG!!! Relax. Enjoy the moment. You won. And no. Nancy Pelosi is not going to be replaced. Soon to be Vice-President Harris will make sure about that.
More News On US House Democrat Reaction To the Results Of The Election