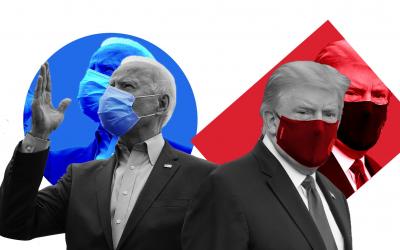 With 29 electoral votes, Florida is the most crucial of all the swing states.

Pinellas county, having around 713,000 registered voters, is split near-equally between both parties, and has been a bellwether for the national election for decades.

Obama won the county in both of his elections, but it swung Republican four years ago by around 5,000 votes.

Since then, both parties have zeroed in on the district hoping for a win that can secure them the White House.

In downtown St Petersburg, the county’s largest and most liberal city, Jeanne Coffin stood outside a mail-in and absentee voting drop-off site on Tuesday with a large flag of US President Donald Trump, waving it proudly to passersby.

Coffin, a small business owner, told Middle East Eye that she had always voted Democrat like her father until he passed away a few years ago.

“I said, you know, I should probably educate myself on this, and I became an independent because I don’t want some party telling me what to do,” she said.

“Trump was the first one that I picked on my own.”

She has no regrets. From domestic issues to foreign policy, Coffin said she admires the Trump administration so much that she felt obliged to turn up on the streets to show her support.

Regarding foreign policy, Coffin praised Trump’s moves on Israel, particularly how quickly he was able to get the US embassy transferred from Tel Aviv to Jerusalem.

“Israel having Jerusalem, I mean – that’s huge,” she said, also praising the US-led normalisation deal between Israel, the UAE and Bahrain that took place in August.

“That Jared Kushner, the world owes him a big, big thank you,” for his work on the Trump administration’s Middle East policy, she continued.

Up the street at the main polling site in the downtown area, Trump supporters handed out coffee and doughnuts from under two large tents complete with a Donald Trump cut out, banners, flags and signs between the parking lot and voting place.

Melodie Stang, a local real estate broker, took off from work the last two weeks to sit outside early voting sites in the area and advocate for Trump, passing out hundreds of bumper stickers and campaign signs.

She said she hoped Saudi Arabia would follow the UAE and Bahrain’s lead concerning normalisation, but mostly appreciated Trump’s work to decrease US dependence on foreign oil.

Stang said she was less concerned about holding Saudi Arabia accountable for its human rights violations because showing the world “good Christian values” would be enough. 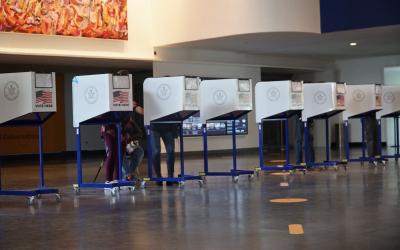 US elections 2020: Polls open as America votes for Joe Biden or Donald Trump

“As far as Arabs go, I know that they love God, but they actually have just a different way of doing it and I think the more we lead by example, with our Christian values, the more our world will be better,” she said.

Concerned about refugee intake and border control, Stang warned against allowing too many Muslims into the country, something Trump has advocated against with his so-called Muslim ban.

“We just can’t have bad boys coming into our country to try and put a thumb on us and say ‘oh well, you have to be Muslim’,” Stang said. “Like in England, oh my God, they just had open borders, and now there’s tons of Muslims running the government right now, and they’re having a lot of problems.”

She also praised the president’s trade tariffs on China and funding cuts to Nato.

Standing along the sidewalk on the other side of the polling site, wearing a Biden-Harris T-shirt, Robert, originally British but a registered US voter for almost a decade, said he was fed up with the Trump administration’s isolationist tactics.

“Foreign policy is very important, that’s why I’m disappointed with the current administration and the way they approach – or don’t approach – foreign policy,” he said.

Robert, who chose not to share his surname, said the Trump administration’s handling of the Israel-Palestine conflict has been particularly offsetting.

“I’m disappointed in the way the administration went, because I feel that the only solution to the Middle East and Israel and the Palestinians is a two-state solution, and everything that [the Trump administration] has done has walked back any progress that was made previously,” he said.

US elections 2020: In the heart of Arab America, voters are anxious

Robert hopes a Biden administration would immediately start working on rejoining multilateral agreements and international organisations such as the UN Human Rights Council that the Trump administration pulled out of in 2018.

“The lack of working with traditional allies to address global issues and the way that countries have been picked out aggressively for no reason,” has been frustrating, Robert said.

“I think it takes countries, especially America, being involved in these international organisations to try and make the world a better place, and we have seen the opposite happening.”

Following Tuesday’s vote, Robert said he hopes to see a cooling off of the polarisation that has taken hold of the country in recent years.

“What I’d like to see from the next administration is some way to soften the differences between the parties and the people,” he said.

“Because we’re all going to be living in this country regardless of the result of this election and we can’t maintain this antagonism toward half of the country and we can’t have an administration that really only protects and does things for half the country”.

Nannette Walker, a retiree, has been an active Democrat her whole adult life and said the level of polarisation the country has seen during the past five years is something she never expected.

“The most important issue for me this year is the threat to our democracy, just looking at what’s happened is just – we should be a united nation, not so polarised by party like this,” Walker said.

“I never expected a Trump presidency, that’s been a tough one for me, I don’t understand it. It really disturbs me a lot, especially when I see women with those signs that are women for Trump – to me it says that those women don’t have enough respect for their own bodies, and their children and their daughters,” Walkers said.

“And what’s happened at our borders with immigrant children being separated from their families – it’s all just horrible”.