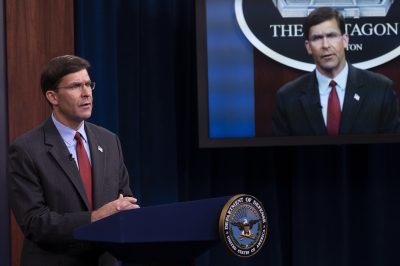 It is said that when elephants fight, it is the grass that suffers. This may play out in Australia’s immediate neighbourhood. As the US–China geostrategic competition intensifies, Pacific island countries find themselves caught in the middle.

The latest round of the US–China rivalry is playing out on many fronts, from diplomacy to trade, investment, technology and military affairs. Some issues — such as the Taiwan issue — are more significant in the Pacific. Of the 14 sovereign Pacific island states, 10 have diplomatic relations with China, while the Marshall Islands, Nauru, Palau and Tuvalu recognise Taiwan.

As US–China tensions rise, the US government is extending increased and open support to Taiwan. Washington expressed opposition to the diplomatic switch of Solomon Islands and Kiribati from Taiwan to China in September 2019. In November, the first ever joint US–Taiwan business delegation visited Saint Lucia, Taiwan’s partner in the Caribbean.

Aid is another contested area. China has significantly increased its aid to the Pacific islands since 2006, making it the region’s second largest donor. Its presence is particularly visible in the infrastructure sector. Meanwhile, the United States is the fifth largest donor, focusing on government and civil society, education and health.

Concessional loans dominate Chinese aid to the Pacific and will continue to do so as China bankrolls its Belt and Road Initiative in the region. The United States has called out China for setting debt-for-equity traps in developing countries — a claim dismissed by Beijing — and created the US International Development Finance Corporation with a budget of US$60 billion to offer alternative financial assistance.

Security competition between the two powers is also intensifying in the Pacific. China’s navy has accelerated its modernisation under President Xi Jinping and devoted more attention to breaking out of the three island containment chains. The northern Pacific islands sit along the second island chain.

China’s 2015 defence white paper, China’s Military Strategy, states that the People’s Liberation Army will abandon its traditional land-focused security mentality and improve its naval capabilities. It likely that China will strengthen its military and security cooperation with the Pacific islands. In response, the United States is also beefing up its security presence in the region. Washington is actively negotiating the expiring economic provisions of the Compact of Free Association (COFA) with the Federated States of Micronesia (FSM), the Marshall Islands and Palau.

The United States will push back against any move by China to substantially increase its military presence in the Pacific, such as the speculated building of a naval base in Vanuatu in 2018. The United States could also discourage Pacific island countries from cooperating with Chinese telecommunication company Huawei for security reasons. The United States and China have contrasting views on Tibet, Xinjiang, Hong Kong and human rights. China considers these issues critical to its core national interests, and will unswervingly compete with the United States for support.

China appeals to Pacific governments with its no strings attached aid, infrastructure support and emphasis on South–South cooperation. The attractiveness of the United States rests on its global superpower status, liberal values and culture, soft power, security cooperation and aid in ‘soft areas’ such as governance, gender equality and female empowerment.

Avoiding taking sides in this great power competition may seem optimal for many Pacific island countries. Papua New Guinea boasts a foreign policy of being ‘friends to all and enemy to none’ while Vanuatu and Fiji’s traditional support for the Non-Aligned Movement is well known.

In February 2019, the Pacific Islands Forum Secretary General Dame Meg Taylor rejected the so-called choice between China and traditional Western partners and supported taking a ‘friends to all approach’. She called for engaging with China collectively and exploring opportunities for partners to work together for the benefit of the region. The following month, the Forum’s Deputy Secretary General Cristelle Pratt emphasised strengthening US–Pacific relations, and stressed that the activities of both old and new partners should enable Pacific island countries to strengthen their strategic autonomy.

To persuade Pacific island countries to take sides, the United States and China will make their best effort to compensate them for the loss suffered by severing ties with the other. Palau and the Marshall Islands do not have diplomatic relations with China and they are bound by the COFA with the United States, so they are the most likely to throw their support behind the United States in ‘containing’ China’s influence in the North Pacific.

US Secretary of Defense Mark Esper’s visit to Palau in August 2020, a first by a US defence secretary, is Washington’s latest move to deepen US–Pacific security cooperation. Accusing Beijing of exerting growing financial and economic pressure on small countries, Esper vowed to reinforce US ties with Palau. Meanwhile, Palau invited the United States to establish a military base in the country.

The agreement regarding the military use and operating rights of the government of the United States in Palau concluded pursuant to Sections 321 and 322 of the COFA provides for US military forces to designate and occupy new defence sites in Palau.

But taking sides could be harder for the FSM. Although in similar compact relations with the United States, the FSM also enjoys close diplomatic and economic ties with China.

The growing US–China rivalry will loom large over the Pacific, placing more pressure on Pacific island countries. Protecting their sovereignty and national interests will be a big task, putting the leadership and skill of Pacific politicians to the test.

Denghua Zhang is a research fellow at the Coral Bell School of Asia Pacific Affairs, the Australian National University.