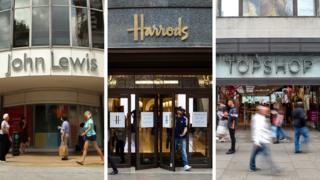 At least 11,000 people in the UK are set to lose their jobs after a raft of firms announced cuts in the past 48 hours.

The cuts are mainly being made by High Street retailers and in aviation – two of the sectors hardest hit by the coronavirus lockdown.

John Lewis has said it will close stores but has not confirmed how many jobs will go.

Topshop owner Arcadia and Harrods said they planned a total of 1,180 job cuts.

Where are the cuts falling?

Others lay-offs to have been announced include:

What do employees say?

Businesses have been hit hard since the UK went into lockdown on 23 March, and even though shopping and travel restrictions are gradually being relaxed, consumer demand is likely to remain depressed for some time.

That means more job cuts could be on the way.

James Phillips, a mechanical engineer, told the BBC he feared he could be made redundant.

“I’ve been on furlough now since March, and I had a letter through the post this week saying I’ve got a redundancy consultation meeting, to discuss being made redundant, from a company who are a nationwide engineering company.

“I’m three months away from having a baby, and I was about to sign for a mortgage this week on a new property, so it’s impacted me massively, really. Everything’s been put on hold.”

Why so many job losses now?

For most businesses, staffing is the highest cost, and many have been using the government’s furlough schemes to keep workers on.

But the programme – which is paying 80% of the wages of more than 9 million staff – will start to be pared back from next month and will end in October.

As firms have to consult for 30-45 days when making redundancies, many will feel that now is the time to act

“There is already a cost to the employer from just a month’s time,” said BBC business correspondent Simon Gompertz.

“Larger employers, planning bigger layoffs, will be eyeing that escalating wage bill and maybe thinking the sooner they move the better.”

What have firms said?

In an email to staff, Harrods’ managing director Michael Ward said the department store was making its cuts with a heavy heart.

“Due to the ongoing impacts of this pandemic, we as a business will need to make reductions to our workforce.”

He said it would take a “drastic improvement in external conditions” for Harrods to recover and return to growth.

John Lewis, which has not said which shops will close, said it was “highly unlikely” it would reopen all of its stores in the future.

“The reality is that we have too much store space for the way people want to shop now,” the company said in a statement.

Topshop owner Arcadia, which is slashing a fifth of its head office workforce, also blamed the pandemic for the cuts.

“Due to the impact of Covid-19 on our business including the closure for over three months of all our stores and head offices, we have today informed staff of the need to restructure our head offices,” the company said.

Are we likely to see more cuts?

It’s hard to keep up with the scale of job cuts and restructurings in retail and hospitality right now.

Businesses are being forced to cut costs dramatically to survive, so that inevitably means job losses. It also a sign that these businesses are not expecting any quick economic rebound. Instead, they’re planning for tough times to continue.

There are likely to be thousands more to come in the weeks and months ahead.

Even though non-essential shops have been open for more than two weeks now, with hospitality set to follow on Saturday, the scale of the latest job losses underlines the challenges these sectors are facing.

Why is retail being hit so hard?

Retailers were already struggling before the coronavirus due to changes in shopping habits as consumers buy more online, as well as pressures from staff, property rent, and tax costs.

But the coronavirus crisis has placed huge pressure on an already weakened sector.

The numbers of people going to shops saw unprecedented lows as people stayed at home to try to slow the spread of the virus.

And what about aviation?

Airlines have also been hit hard by global lockdown measures and travel restrictions.

While planes aren’t flying, airlines aren’t making money, but they still have funds flying out of the door.

And firms that rely on airlines flying, such as commercial aerospace businesses, have decreased production.

Along with cuts by Airbus and EasyJet, British Airways has announced plans to cut 12,000 of its workforce.