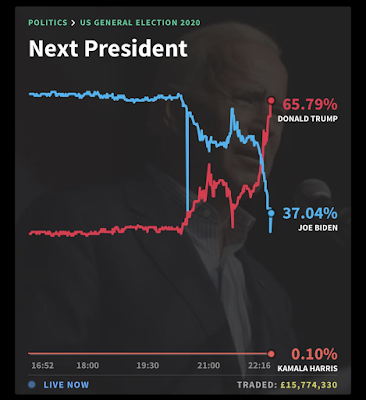 Advertise Here for only $299 mo. Unlimited cpc Adspace ID1
00:08 EST: It looks like the Republicans are going to lose two senators (Arizona and Colorado), but gaining two senators. One in Georgia and one in Michigan.
23:59 EST: There are 1.9 million absentee ballots that need to be counted in Wisconsin (link here).
23:52 EST: They are now talking about why the Electoral College is unfair to Democrats on ABC News.
23:45 EST: Reporters on NBC are quoting Biden officials that they are very confident that the mail-in ballots will shift in favor to them, and that they will win Wisconsin, Michigan, and Pennsylvania.
23:44 EST: There are 3 million absentee-ballots in Michigan (link here).
23:42 EST: The people on NBC and ABC look very glum. They are now talking about future elections.
23:38 EST: 3,098,947 mail-in ballots were requested in Pennsylvania.
23:34 EST: Bookies are now saying that Trump has been re-elected. 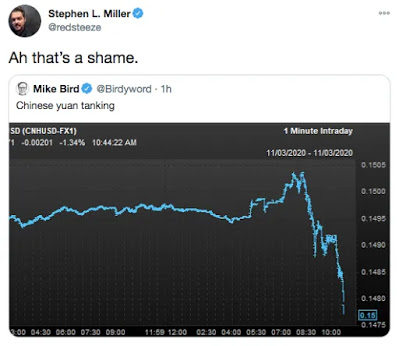 22:08 EST: It looks like Trump is going to lose Arizona. But he is still in the lead in Virginia!!!! Nah. I will be very very surprised if Virginia flips to Trump.

22:04 EST: The polls were all wrong!!!!! With the exception of the ones that I follow (link here). There has to be a reckoning. This is the second time that they have been completely wrong.

22:59 EST: Democrat operatives are now talking about voter suppression and racism on TV.

22:48 EST: If President Trump loses Pennsylvania and Arizona. He will have 273 electoral votes, and will be re-elected as President of the United States.

22:45 EST: FOX News is predicting the Democrats will gain 5 seats in the House (link here).

22:37 EST: There is a problem in Philadelphia. Officials are suspending the count of mail-in votes (link here). Another Philadelphia official is saying that for every Republican mail-in ballot, there are sixteen Democrat ones !!!! (link here).

22:31 EST: Thousands of protestors are converging on the White House (link here).

22:20 EST: If this trend continues. And looking at how the votes are distributed. This election cycle will be a repeat of 2016, and President Trump will be re-elected as President.

21:58 EST: Biden’s lead in North Carolina is shrinking. With 87% of the votes counted, he leads Trump 49.5% vs. 49.3%. Or by 9,000 votes. But there are still three counties that need to be counted, and they voted Republican in 2016. This is going to be a squeaker, and I will not be surprised if the lawyers are gearing up for a recount.

21:35 EST: North Carolina is very close. With 83% of the votes counted Joe Biden is ahead with 60,000 votes. There are 5 counties that have not produced their results yet. They are also Republican rich counties. The only way President Trump will win this state is if these five counties have a turn-out significantly higher from 2016.

21:14 EST: Joe Biden is doing better than what Hillary Clinton did in the states of Ohio and Pennsylvania. Biden is positioned to win these states and the state of North Carolina. If he succeeds, the odds of him becoming the next US President increase significantly.

21:10 EST: I am surprised by Trump’s showing in Virginia. With 38% of the vote counted, he is in the lead with 58%. But the votes from the Democrat strongholds of Richmond and Norfolk are now starting to come in.

20:35 EST: Is North Carolina in play? Joe Biden is doing better than I expected. With 66% of the votes counted, he has 53% of the vote. But some Republican rich counties have not reported yet. But it is close.

20:25 EST: Joe Biden has large leads in Texas (52%), South Carolina (51%) and North Carolina (56%). But with large Republican counties not reporting, I will not be surprised if these results start to change in favor of President Trump.

20:20 EST: With 89% of the votes tallied in Florida. Two Republican rich counties that still need to record their results. And with Trump leading by 170,000 votes. I am calling it. President Trump has won Florida.

On the flip side Trump has 58.9% of the votes in Virginia (31% of the votes have been counted). But Democrat rich counties are just starting to report their numbers.

20:00 EST: Polls are now closed in Michigan, Texas, and Pennsylvania. It is going to get interesting now.

19:55 EST: Trump and Biden are now tied in Florida. But Democrat rich Miami-Dade, Broward, and Palm Beach still have about 17% of their votes that need to be counted.

19:48 EST: Polls are closed in Ohio. Biden is in the lead with 64% of the vote out of 18% counted. Most of these votes though come from Democrat urban centers like Cleveland, Columbus, and Dayton. Republican rich counties have not reported their numbers yet.

19:42 EST: It looks like Joe Biden has a very good chance to win Florida. With 74% of the votes counted, he has a lead of 140,000 votes. The polls in the northeast of the state are closing in 15 minutes. They vote Republican. But will it be enough?

19:30 EST: Joe Biden is doing better in the other counties of Florida making this a very close race right now. He now leads with 51% of the vote (59% of the vote counted).

The polls in the north western part of the state close at 8:00 EST. They are Republican rich. But will it be enough? With the exception of Miami-Dade, Joe Biden is doing better than expected in Democrat rich counties.

19:24 EST: Georgia’s polls are now closed and Joe Biden is in the lead with 55% of the vote with 3% reporting. But most of these votes are from Democrat rich Atlanta (Cobb county).

President Trump has 49.3% of the vote Joe Biden’s 49.8%. 23% of the votes have been counted. This tally  includes Democrat vote rich counties like Broward and Miami-Dade.

18:55 EST: The polls closed in Indiana and Kentucky an hour ago.