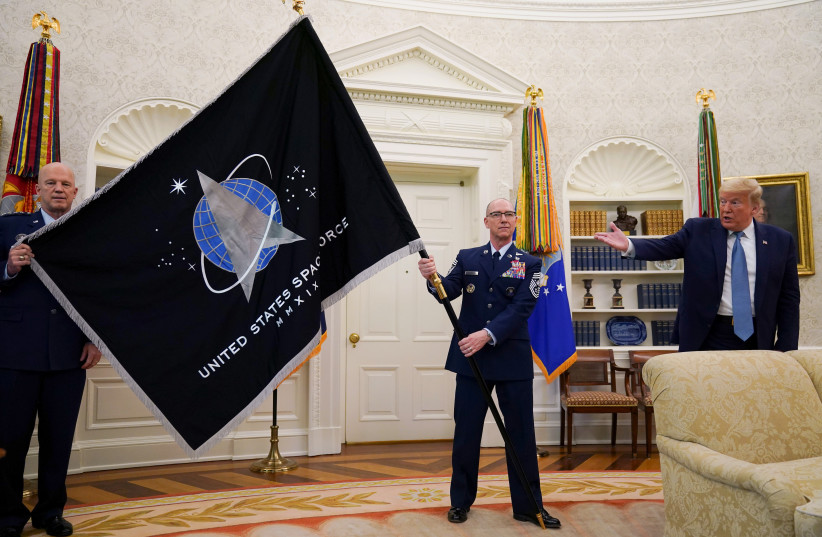 If war is coming to outer space, then the United States is late to the battlefield. But, its recently unveiled Space Force is already changing the ground rules in the Middle East. Satellites have become the name of the game. As America continues its troop drawdown in Syria, Iraq and around the region – with more cuts almost certainly coming as a result of the COVID-19 pandemic – Space Force will give the Pentagon a greater chance to defend US satellites that are so critical to the containment and defeat of terrorist organizations. Those satellites feed the military key information in order to target Islamic State (ISIS) and al Qaeda with precision-guided bombs. And they help keep close tabs on Iran’s menacing activities in the Arabian Gulf. “Every single thing America and its coalition allies do from here on out comes about in space,” said Mick Mulroy, a former US deputy assistant defense secretary for the Middle East. “Everything starts there. At the same time, our adversaries have had a front-row seat in our many successes of integrating space, and they don’t like what they see, because it provides us such great advantage.” “The idea here is not to blast other satellites – Chinese, Russian, etc. – out of orbit,” said Ilan Goldenberg, director of the Middle East Security Program at the Center for a New American Security. “Space Force is a defensive command, in that it serves to guard the 24 US GPS satellites and all of the associated hardware. And that is what is providing America’s eyes and ears over the Middle East.” That includes drones that glide over Iraq and Syria, collecting valuable data on ISIS. That intel has led directly to targeted attacks, utilizing precision-guided weapons in urban battlefields like Mosul and Raqqa, where booby-trapped neighborhoods and militants taking cover in residences made a ground game incredibly risky. The extraordinary reliance on space makes it inevitable that future wars will be fought there, says Dean Chang, a senior research fellow at the Davis Institute for National Security and Foreign Policy. “And it’s not just the solider on a mountaintop who relies on a GPS signal,” he said. “Think about in peace time. You track your package on Amazon and you’re relying on GPS. When you use your credit card at the grocery store, it’s going through communication satellites. You can disrupt a huge chunk of a country’s economic system and every day way of life by disrupting its satellites.” Right now, the greatest threat to Space Force isn’t any Middle Eastern country but Russia and China, according to Mulroy. “America’s rivals have a number of options to deal with increased American activity in space. Jamming tactics could deny or at least delay GPS signals from US satellites. And they have the capability to blind US forces from detecting missile launches, including missiles that could target US systems.” Iran attempted three satellite launches last year, all of which crashed and burned. But, they finally got one into orbit last month. And while the Pentagon doesn’t believe it’s very useful for intelligence-gathering purposes – US Space Force Commander Gen. Jay Raymond called the satellite “a tumbling webcam in space” – senior American officials have sounded the alarm for some time that the very same technology used to put a satellite into space is also utilized to manufacture long-range missiles capable of hitting American soil. Iran’s big regional rivals have taken notice. The United Arab Emirates has invested more than $5 billion in its space program and is set to launch a Mars orbiter this summer to celebrate the country’s 50th anniversary, at the same projected time a NASA rover and a Chinese orbiter and rover launch for the red planet. In February, Saudi Arabia launched a telecommunications satellite designed in tandem with American weapons manufacturer Lockheed Martin. Israel still possesses the most advanced communications satellites in the region, according to the Australian Lowy Institute think tank, and it came within 15 kilometers of a privately funded moon landing last year before mechanical issues led to the craft’s violent end. Perhaps the greatest opportunity for the US to succeed in the Middle East space race is the formation of coalitions seen in previous conventional wars. Just last year, NATO declared space an operational domain and the United Kingdom’s Defense Ministry outlined a comprehensive space strategy. A number of American allies, including Canada, Australia and Germany, participate in operations at US Space Command’s Combined Space Operations Center in California. And Japan’s Defense Ministry announced this year that it will share with US forces information collected at its new Space Domain Mission Unit. France announced the establishment of its own space command this year, with plans to develop satellites that can neutralize threats utilizing on-board weapons. And lesser-known allies like burgeoning high-tech hub Estonia, a current member of the UN Security Council, also inaugurated its own Space Office. These nations represent a potential “coalition of the willing” to counter Iranian threats and China’s ever-growing influence in the Middle East, which has recently come to light due to publicly-stated US fears that Beijing’s surveillance capabilities could pose a threat to Israel and joint US-Israeli operations. Yes, space is the next frontier. Until the next one, wherever that may be. For the time being, though, the US has some catching up to do in order to guarantee its military superiority in the Middle East. Read more articles like this atthemedialine.org.