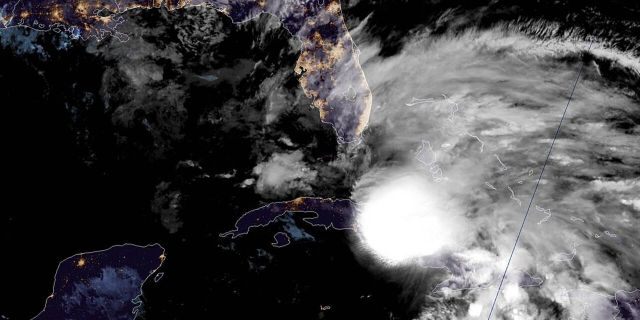 A strengthened Tropical Storm Eta is roaring across Cuba on Sunday with Florida in its sights after leaving dozens dead in Central America.

The National Hurricane Center (NHC) said as of Sunday morning that Eta is packing maximum sustained winds of 60 mph, and is located about 280 miles south-southeast of Miami, moving northeast at 12 mph.

“Eta inland over east-central Cuba,” the NHC said in its latest advisory. “Expected to produce dangerous storm surge, flash floods, and strong winds over portions of Cuba and Florida.”

Tropical Storm Eta can be seen over Cuba as the storm moves closer to southern Florida on Nov. 8, 2020. (NOAA/GOES-East)

Eta is expected to be near hurricane strength when it moves over or near the Florida Keys, with a hurricane watch in effect for the Keys as well as the Florida coast from Deerfield Beach to Bonita Beach.

The storm shouldn’t be a huge wind threat, but it will bring lots of rain across a waterlogged south Florida through Monday.

Some areas of central and south Florida could see 6 to 12 inches of rainfall, including some areas of up to 18 inches.

In addition to the risk of storm surge, Beta also brings the risk of tornadoes through Monday over southern portions of Florida and the Keys

After passing through the Keys, the storm will linger in the eastern Gulf of Mexico for a few days and then the forecast becomes very uncertain.

In advance of the storm, Florida Gov. Ron DeSantis declared a state of emergency on Saturday for eight counties in the southern part of the state “in an abundance of caution” of the approaching storm.

Florida Power & Light (FPL) said Saturday that it expects a “significant number” of customers in the south and southwest portions of Florida to experience power outages as the storm impacts the state for several days.

“In some areas, customers could experience more than one outage as weather bands move through,” the utility said.

FPL said that it was pre-positioning about 10,000 workers who could help restore power.

“My garage needs sandbags to keep the water out,” Miami Beach resident Annie Perez told WSVN-TV. “My soil gets flooded even when there’s no storm.”

South Florida has seen a recent rainy stretch, which has left the ground saturated and local officials concerned about flooding.

Miami-Dade County declared a state of emergency Friday night and also warned a flood watch would be in effect through Tuesday night.

Eta was once a Category 4 hurricane before it slammed into Central America, and authorities from Panama to Mexico were still surveying the damages following days of torrential rains during the week. 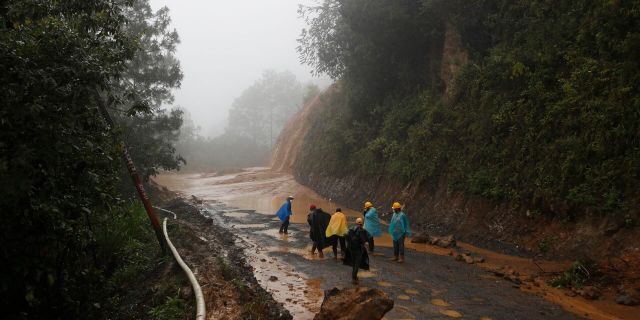 Workers walk around a road blocked by a landslide in San Cristobal Verapaz, Saturday, Nov. 7, 2020, in the aftermath of Hurricane Eta. (AP Photo/Moises Castillo)

The storm’s torrential downpours triggered devastating landslides that have killed dozens across the region. 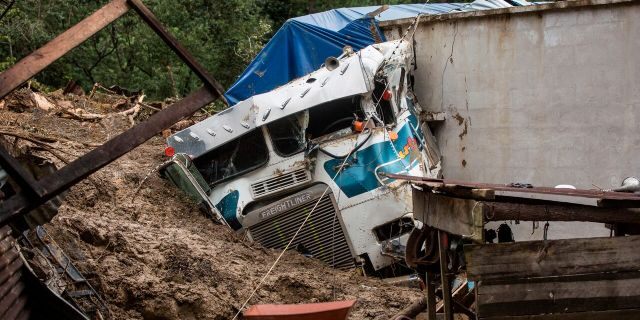 A semi is partially buried in a massive, rain-fueled landslide in the village of Queja, in Guatemala, Saturday, Nov. 7, 2020, in the aftermath of Tropical Storm Eta. (Esteban Biba/Pool Photo via AP)

Rescue workers were forced to call off efforts in Guatemala on Saturday due to relentless rain making for unsafe conditions. 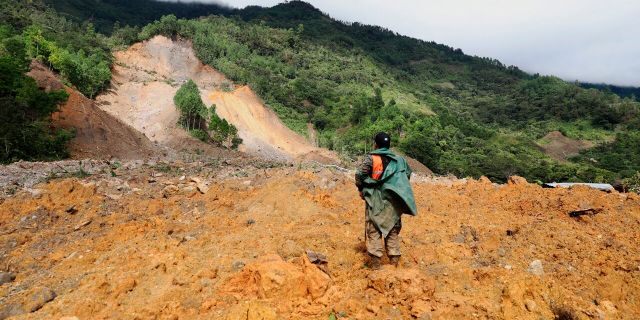 A member of a search and rescue team looks for survivors through the destruction caused by a massive, rain-fueled landslide in the village of Queja, in Guatemala, Saturday, Nov. 7, 2020, in the aftermath of Tropical Storm Eta.  (Esteban Biba/Pool Photo via AP)

“We are coordinating so that all the personnel are evacuated in the morning because we can’t work there,” emergency worker Juan Alberto Leal told Reuters. “If we stay, lives will be lost.”

Some 150 homes in one village were destroyed.

The US Army’s Joint Task Force-Bravo rescued 11 people on Friday morning in Honduras, where devastating flooding and landslides were also reported.

In southern Mexico, across the border from Guatemala, at least 20 people died as heavy rains attributed to Eta caused mudslides and swelled streams and rivers, according to Chiapas state civil defense official Elías Morales Rodríguez.

The worst incident in Mexico occurred in the mountain township of Chenalho, where 10 people were swept away by a rain-swollen stream; their bodies were later found downstream. 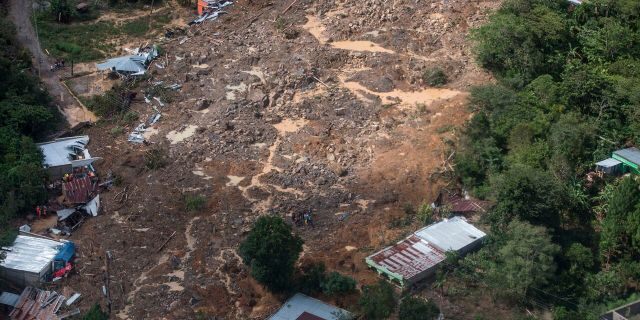 An aerial view of the massive, rain-fueled landslide in the village of Queja, in Guatemala, Saturday, Nov. 7, 2020, in the aftermath of Tropical Storm Eta. (Esteban Biba/Pool Photo via AP)

Flooding in the neighboring state of Tabasco was so bad that President Andrés Manuel López Obrador cut short a trip to western Mexico and was flying to Tabasco, his home state, to oversee relief efforts.