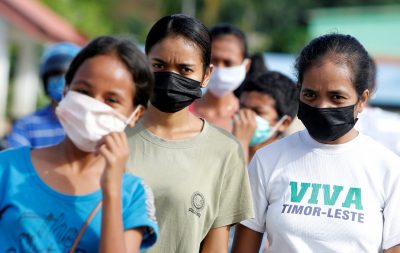 Timor-Leste is going through turbulent times. On the political front, the old conflict between former prime ministers Mari Alkatiri and Xanana Gusmao continues to generate parliamentary reshufflings, political deadlocks and uncertainty. All public budgets since 2018 have been delayed, causing declines in public expenditure.

The political situation took a new turn earlier this year with the collapse of Gusmao’s coalition and Alkatiri’s Fretilin party joining the government in June. The government is now aligned with the parliamentary majority and has presidential support. This could be the beginning of more stability and less political uncertainty but the situation remains fragile.

Annual economic growth has been a modest 3 per cent in recent years and predicted to remain low in coming years. It is far from the growth required to make Timor-Leste a middle-income country by 2030 as stated in its Strategic Development Plan. Many East Timorese still live in deep poverty almost two decades after independence.

On the positive side, Timor-Leste seems to have handled the COVID-19 pandemic well. There are few reported cases and no deaths. The health sector is of a reasonable standard — its improvement is widely considered among the island’s major achievements since independence.

Even if the pandemic situation turned, it would presumably have a modest impact as Timor-Leste has a very young population, who are typically not as seriously affected by COVID-19. The median age is 17 and around 40 per cent of the population is below 15 years of age, making it one of the youngest populations in the world.

The pandemic has disrupted international production networks and trade. Timor-Leste has been insulated from these effects as it is not integrated into the global economy. Subsistence farming dominates livelihoods and less than 30 per cent of all employment is wage-based.

Modern industry consists of the public sector and publicly-financed infrastructure projects. There are no major manufacturing or multinational firms on the island. Tourism still waits to be developed and non-oil exports consist of modest amounts of coffee. This lack of a modern sector is a major problem — not least because Timor-Leste’s growing labour force means that there is a pressing demand for employment.

The main economic impact of COVID-19 will come from how the crisis affects oil prices and the stock market. Timor-Leste is totally dependent on oil and natural gas, which account for a stunning 90 per cent of government revenue. This revenue is invested via the Petroleum Fund in foreign stock markets and the return is used for public expenditures, which account for around 70 per cent of GDP — one of the highest levels in the world.

Lower oil prices and falling stock markets have a direct negative impact on future public expenditures. Oil prices have fallen by around 40 per cent since the beginning of the year but global stock markets — after an initial decline and quick rebound — have not been overly affected by COVID-19. A larger decline, however, cannot be ruled out as the crisis lingers and a serious potential risk lies in the government’s excessive withdrawals from the Petroleum Fund. Many observers predict that it could be depleted within the decade.

Large investments could be justified if the return on those investments is high. But instead, investments are channelled into two mega industrialisation projects with highly uncertain returns. The first, managed by Mari Alkatiri, is an industrial zone in Oecusse, an East Timorese enclave located within Indonesia with no borders to the rest of Timor-Leste. There seems no compelling rationale for pursuing the government’s ambitious plan of developing research, tourism, finance and logistics there.

The second project is even larger. The Tasi Mane industrial cluster on the South coast is headed by Gusmao and has the potential to exhaust the Petroleum Fund. The plan is to build a petrochemical cluster to process natural gas from the Timor Sea. It was assumed that private investors would complement the government’s massive investments in ports, roads and airports. Yet so far no such private investments have materialised.

There is a real risk that Tasi Mane and the Oecusse industrial cluster will turn out to be white elephants. Gusmao recently resigned as chief negotiator of the Greater Sunrise gas field and the top three petroleum officials and the oil minister were replaced. It is too early to say, but these changes could indicate a new strategy.

It is plausible — and perhaps likely — that Timor-Leste will emerge from the pandemic less damaged than many of its neighbours. The country has so far prevented the pandemic getting a foothold on the island and the economy is comparably less vulnerable to global economic turmoil. But pandemic or no pandemic, the country’s future development appears highly uncertain.

Fredrik Sjöholm is Professor at the Department of Economics, Lund University.