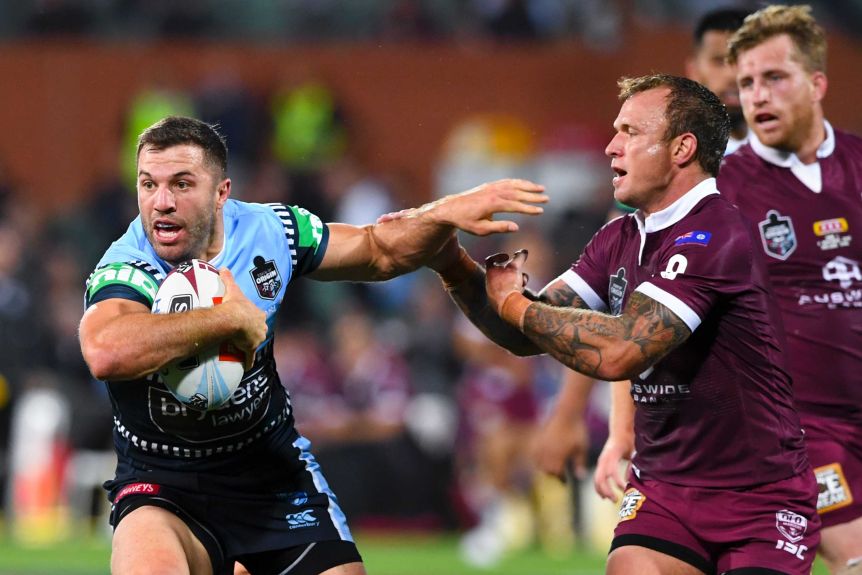 Wednesday’s State of Origin opener was a new experience in so many ways.

But one thing that got lost in all the talk about the Adelaide locale, the November timeslot and the almost complete reload of the Queensland side was the fact that this was the first representative game under the new six-again rules.

What resulted was one of the fastest Origin games we’ve seen.

All year we’ve celebrated imperfect games, like Melbourne’s scrappy golden point win over the Roosters in round eight, and appreciated them for the spectacle that they become. The Origin series opener was no different.

It wasn’t perfect, but you can’t deny it was exciting.

The first half was a genuine mess.

In attack, Queensland looked like they’d never met each other, and the Blues wasted so many opportunities that they probably could have been up by double the 10-0 lead they held at half-time.

As former Maroons superstar Cooper Cronk pointed out, the first game of a series is traditionally “an ugly affair”. And that goes double for the first half, with an unquantifiable amount of nervous energy needing to be released.

Another 40 minutes like that probably would have consigned this game to the annals of history as one of the worst we’ve seen, but the tide turned.

Come the second half, the Maroons got on the front foot literally from the kick-off through Jai Arrow and Lindsay Collins, and rode that momentum for the third quarter of the contest.

By the time the Blues finally got the ball back in hand for any decent stretch of time, the game was already almost gone.

Through 65 minutes of game time, it felt like we’d seen 65 minutes of football and a similar equation could be done once the siren sounded.

But there’s a part of the rugby league collective that would say that’s not entirely the point of State of Origin.

Origin doesn’t have to equal biff

All of that ‘state against state, mate against mate’ stuff is so clearly connected to the first game in 1980 — celebrating how Queensland great Arthur Beetson tried to take off the head of club teammate Mick Cronin, thereby legitimising the concept.

The game has moved a long way away from glamourising the sort of thuggery that permeated the game back then, as evidenced by the genuine fears about another possible concussion for Blues skipper Boyd Cordner.

But the potential for a bit of biff still featured prominently in Channel Nine’s pre-match hype and its absence was still lamented after the game, when Fox Sports panellist Paul Kent complained of a lack of aggro in the game, seemingly ignoring the reason for its truancy.

With fewer stoppages, players didn’t bother with the niggle and aggro that usually permeates Origin contests because the stakes were too high.

No-one wanted to be caught behind the play because in today’s NRL, the referee likely won’t bail you out by blowing up the play.

Being a step slow around the ruck or missing a marker can mean death for your defence.

A huge turnover of players and so many newbies to not just the Origin arena, but the NRL, also meant the 34 men who took the field didn’t carry years of personal baggage into the game.

So even if it wasn’t the best football in an Origin game, it was probably the most football we’ve seen in a long time.

Maybe the lack of push and shove made the on-field product hit different.

Or it might have been the oval-shaped field and half-empty stadium, or the fact it was populated by “neutral” (clearly pro-Queensland) fans.

That all played a part, but we still had plenty of time for some of that classic Queensland underdog myth-making malarkey.

Rookie utility Kurt Capewell stood tall despite playing injured and out of position, Dane Gagai added to his legend in maroon and previously unloved captain Daly Cherry-Evans led his team to one of the unlikeliest victories we’ve seen in more than a decade.

We had a comeback for the ages and an apparently complacent Blues side taking their foot off the pedal.

In a lot of ways, it was a classic, even without all the ancillary haymakers.