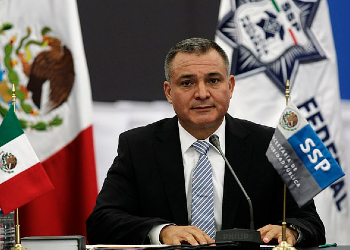 The former head of Mexico’s federal police has been implicated in a money laundering scheme that moved millions in suspected bribes from drug traffickers. This is just the latest revelation showing the staggering collusion between Genaro García Luna and the criminal groups he was supposed to fight.

An architect of Mexico’s controversial militarized response to organized crime, García Luna is alleged to have moved over $50 million in bribes from drug traffickers through 11 different tax havens around the world, according to an exclusive investigation from Univision.

The money reportedly came from “bribes delivered by organized crime [groups]” when he served as Mexico’s public security secretary from 2006 to 2012. In December 2019, US authorities arrested García Luna on drug trafficking charges and for allegedly accepting multimillion-dollar bribes in exchange for allowing the Sinaloa Cartel to operate with de facto immunity.

When García Luna was arrested, authorities from Mexico’s Financial Intelligence Unit (Unidad de Inteligencia Financiera — UIF) had allegedly already completed an investigation into his suspected misconduct and were in the process of filing a complaint with the Attorney General’s Office, UIF head Santiago Nieto told Univision.

Two weeks after the arrest, Nieto filed two complaints against García Luna with anti-corruption prosecutors in Mexico after allegedly discovering his “entire” money laundering scheme. To conceal the bribes, García Luna reportedly made deposits into bank accounts owned by front companies in the United States, Barbados, Hong Kong, Israel, Latvia, Panamá, United Kingdom, Cyprus and Curaçao, according to Univision, which had access to the court filings.

The UIF in Mexico is reportedly cooperating and exchanging information with their US counterparts regarding the case looking into García Luna’s alleged criminal links.

There were strong suspicions that García Luna had ties to drug trafficking groups throughout his law enforcement career in Mexico, and the latest revelations will likely bolster the United States’ case against him.

During the administrations of former presidents Vicente Fox and Felipe Calderón, Mexico’s Civil Service Secretariat (Secretaría de la Función Pública – SFP) reportedly received at least a dozen complaints against García Luna, ranging from allegations of illicit enrichment and links to organized crime to outright neglect and abusing his power, according to El Universal.

Former US Ambassador to Mexico Roberta Jacobson had also gotten wind of such claims, but stressed there was never any “corroborated information of [García Luna’s] involvement in drug trafficking.” Calderón echoed this point, denying that his administration had information linking García Luna to drug trafficking, but rather only heard “rumors” that weren’t corroborated by any evidence.

However, in a May 6 column for Deutsche Welle, journalist Anabel Hernández — who has a long history of investigating the Sinaloa Cartel and its connections to political power — threw water on any doubts about García Luna’s links to one of the world’s most powerful criminal syndicates.

“The first time I heard the name of García Luna and his ties to the Sinaloa Cartel was at the beginning of Calderón’s six-year term,” Hernández wrote. “A group of soldiers had warned Calderón … that the then-head of the Federal Investigative Agency (Agencia Federal de Investigación – AFI) had ties to the Sinaloa Cartel. The soldiers delivered videos and telephone intercepts of members of García Luna’s closest circle speaking and negotiating with drug traffickers.”

It remains to be seen how García Luna’s historic trial in the United States will play out. But as the evidence against him mounts, including telephone wiretaps and expected testimony from top Sinaloa Cartel members like the brother and son of Ismael Zambada, alias “El Mayo,” Mexico’s security institutions might be in for a reckoning.