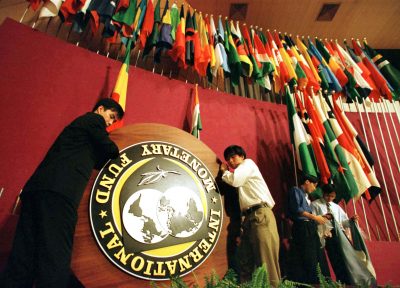 Asia’s businesses and households rely on a global system of rules and institutions to do business overseas. That global system is under attack, and Asian governments are yet to mobilise to stop it. Governments in the region weaken the system every time they preference short-term bilateral band-aids over long-term multilateral solutions; from managing US–China tensions to the response to COVID-19. Now is the time for Asian governments to show leadership on the global system and its reform. If they don’t use it, they’ll lose it.

Losing it would be a big problem for the region. Asia relies on the global system for its prosperity. Asian governments rely on the World Trade Organization to settle trade disputes and rely on the global trade rules for the majority of their trade. They rely on the Paris Agreement to address climate change, the WHO to address global health challenges and international law to bolster security. Asia relies on the US-led global financial system for investment, finance and stability.

The global system is vital to Asia’s interests. Yet, one by one, global rules and institutions have been undermined in recent years. The United States has shelved the WTO dispute settlement process, shown contempt for trade rules and trade partners, withdrawn from the Paris Agreement and cut funding to the WHO. The United Kingdom has threatened to breach international law in its Brexit negotiations. China has responded to US flouting trade rules with managed trade and shows disrespect for international human rights law in Hong Kong and in its treatment of Uighurs in Xinjiang. The United States, China, Japan and South Korea have sidelined the multilateral system in their trade disputes. During the COVID-19 crisis the cooperation and solidarity of the global financial crisis has been replaced with confrontation and suspicion.

The multilateral system is far from perfect. It’s fragmented, inefficient and out of date. It’s been 27 years since the WTO concluded a comprehensive trade round. Its trade rules are silent on the digital economy, data flows, subsidies, state-owned enterprises, technology transfer and all the things fuelling tensions today. Attempts to plug the gaps with plurilateral and hundreds of bilateral trade agreements have created a noodle bowl of inefficient and incompatible rules that businesses and households struggle to navigate.

Finance is no better. The IMF is too under-resourced to fend off a widespread shock. Its governance structure is from a bygone era. Countries remain hopelessly reliant on the US dollar, scrambling to build mountains of costly reserves that divert resources away from development programs while hurting US exports and inflaming trade tensions. Attempts to create regional substitutes for the IMF have made crisis responses slower and less effective, often creating a false sense of security.

Whether it’s trade, finance, technology, climate, human rights or geopolitical conflict, the global system has failed to keep up with the growing need for international cooperation. But these deficiencies should inspire reform, not retreat. If out of date trade rules are fuelling tensions, the solution is to update the trade rules, not to let even more trade take place outside the rules. Global problems require global solutions. Yet the response of many countries, most notably the United States, has been to abandon the system, creating more problems and tensions in the process.

Asia’s efforts to protect the global system are not commensurate with its incentives to do so. Asia’s dependency on the global rules-based system means it has a huge stake in protecting it. Too many Asian governments have imprudently favoured short-term bilateral band-aids over long-term multilateral solutions. Responses to COVID-19 have focused on bilateral deals on trade in personal protection equipment, vaccines, borders and financial support rather than promoting regional or global cooperation. Attempts to manage spill-overs from US–China tensions have often been bilateral rather than working with other countries in the region that are in the exact same boat. While Indonesia has shown leadership in pushing for WTO reform in the G20, too few Asian countries have supported it, focusing instead on trying to put out bilateral spot fires and win favour with superpowers.

There is a better way. If Asia wants the multilateral system to survive, it needs to promote it, use it and, most importantly, reform it. US–China tensions, combined with the November US presidential election, makes reform difficult. Working with other countries in the region is the best way to build support. COVID-19 has provided many opportunities for multilateral cooperation: from financial stability, regional travel protocols and the distribution of COVID-19 diagnostic tests and treatments, to food security, coordinated structural reform and advancing Asia’s flagship trade agreement, the Regional Comprehensive Economic Partnership. The G20 Summit in November is an opportunity for Australia, Japan, South Korea and India to work with Indonesia to push for more than just rhetoric on WTO reform.

Asia should identify practical and constructive ways to engage the United States in the region. If the polls are correct and November delivers a President Joe Biden, his emerging agenda provides areas for potential cooperation, including strengthening regional action on climate change, building consensus on principles and rules around infrastructure and investment, strengthening domestic energy systems, promoting regulatory consistency in the digital economy and setting common standards for emerging technologies.

In this week’s lead essay, Chris Legg discusses an emerging part of the multilateral system: the Chinese-inspired Asian Infrastructure Investment Bank (AIIB) which recently marked four-and-a-half years of operations at its 2020 Annual Meeting. The meeting focused on how to build on the AIIB’s success in establishing itself as a respected multilateral financier of quality infrastructure investments, while pivoting in support of its members’ response to COVID-19. The question now is to ensure that the AIIB remains an anchor for consensus in the region.

There are questions to be resolved, warns Legg. How far should the Bank seek to transform itself into a global as opposed to regional lender? Should it extend its operations higher up the project cycle and how should it seek to influence the investment and policy environment? Should the Bank build on some aspects of its COVID-19 response such as lending for social infrastructure? How can it better address the needs of its low-income members without seeking additional grant resources?

Geopolitics are an important subtext to all these questions. A critical challenge is to determine the scope to expand the AIIB’s role in promoting technology-enabled infrastructure, but ‘think about how support for facial recognition technologies by “China’s bank” could be misconstrued’, notes Legg. ‘On all these fronts, aspirations will need to be tempered by good political judgment. Increased geopolitical tensions are not helpful for an expanded agenda’.

As the full impact of COVID-19 is laid bare, two things are certain: governments will be desperate for growth, and a world with a weakened global system will mean a slower recovery for all.