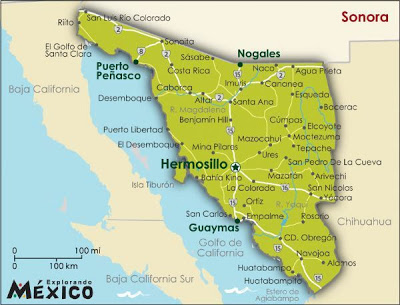 A recording of an alleged member of a cell that was supposedly running in a convoy was sent to me. He talks about operations in Sonora.
The sicario is talking about which side is the authority is on, he says: the municipal and state are with the Noveno and the national guard are on the side of the the people of El 20, the brother of the Gigio. He says that 92 trucks will go down from the ejidos of Mascareñas and San Lazaro, these ejidos are near Nogales, Sonora.
Felipe De Jesús Sosa Canizales “El Gigio” and Leonardo López “El 20” or “Nayo” they are the Lieutenants in Sonora of El Mayo Zambada.
There has been so much activity, it feels like it’s ready to explode. I been getting a lot of information and constantly trying to get confirmation is hard to do, there is a lot of fake news. There are people with ulterior motives try to sway public opinion to one side or the other. We even see it playing out on the comments of Borderland Beat. This pace of information, some not vetted or sometimes easily known to be fake information can be problematic.
One example of this is a video in Twitter making it’s rounds claiming it’s the CJNG, but if you listen to the people they are from Sonora. They say that they are people of El Chaparrito, a reference to Chapo Guzman. There is also a corrido playing in the background talking about El 20, the one who fought in Agua Prieta against Los Paredes. The musical group Los Traviezos are the ones performing the corrido, It would seem that this people are from Nogales and this convoy may very well belong to El 20 Layo, brother of El Gigio.
I believe that the wrong information only causes undue fear and confusion, for example some sources say that the national guard is on the side of El Gigio but in Caborca ​​they say that the National Guard is on the side of El Cazador. And now they say that Rodrigo Paez, Jesus Darío Murrieta Navarro “Cara de Cochi” are bosses of El Cazador and that they are working together, while others say that they are at war. There is a lot of confusion for the way they are operating. There is a lot of false information circulating on social media, for example a page that is in favor of and is not partial is the Facebook page Sonora Violento, they only report on people who are against La Gente Nueva de los Salazar or of Los Paredes.
The war for the plaza is going to continue, it is normal for police authorities to “show face” only when making an appearance for the camera but really do not get involved, just making minor arrests to justify their existence.
These occurrences are coming from high above the structure of the cartels, they are allowing this to happen. The extreme daylight violence is evidence that someone gave the green light for this to happen. As for me, I believe the order was given by the salazar and was supported by the chapitos.
Understand that this is one more proof that the Sinaloa Cartel is fractured in a war between Chapitos vs Mayo Zambada. Magdalena, Santa Ana, Imuris are only large drug warehouses and places of significant strategy. The objective of all this is to take the city of Nogales. To understand what I’m trying to say, let’s look at the map of Sonora.

El Cazador is trying to make inroads into Magdalena and Santa Ana. In all appearances, it looks like he already took control of them. In the meantime, El Gigio has his home base in Cucurpe, neighbor of Santa Ana and Magdalena. If you examine the recent activities, these are strategic operations meant to eventually get to Nogales, that will close all the doors and contain El Gigio in Nogales. The great advantage for El Cazador is valuable territory that he controls ins Caborca, Altar, pitiquito, Ele Saric, Tubutama and Trincheras. El Gigio controls Nogales, Santa Cruz, Imuris and Cucurpe. Santa Ana and Magdalena are right in the middle.
It would seem that the next step for El Cazador will be to take over Imuris and Cucurpe to contain El Gigio even more and he would be forced to withdraw to Nogales. If the war reaches Nogales it is a lost case for everyone, because to heat up a large plaza like Nogales, it would certainly bring in the federal government in full force force that it will most likely result in high-impact arrests or the death of high-ranking drug trafficking bosses.
I think that the recent violent incidents are just the beginning as El Gigio is a narco of experience, the US Treasury Department has already designated him as the main operator of the cartel but has managed to remained in force for many years and has a lot of people on his side.
I think El Cazador comes from the school of his previous bosses, the great inheritance he received when he stayed with the people of the group Los Paleteros and he also seems to have a lot of people on his side for he is able to maintain two battle fronts, fighting the coast of Caborca ​​and the plaza of Magdalena, Santa Ana, he certainly has a lot of resources.
If we look at the strategy of the cartel, Los Chapitos are just one step away from taking over the entire border of Sonora. Los Chapitos already have Agua Prieta, Naco, Saric, Altar, Caborca ​​and San Luis Rio Colorado, as for Mayo Zambada he has Santa Cruz, Nogales and Puerto Peñasco.