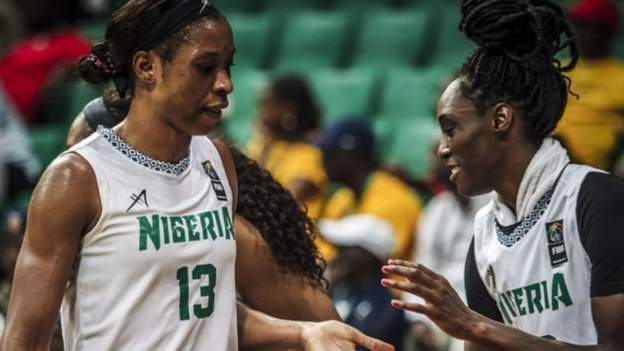 African football and athletics have been gravely impacted by the coronavirus pandemic – as is perhaps guessable, with the sports being the two biggest on the continent. But with sportsmen and women experiencing series of pay cuts, lost income, redundancy, mental health hit and lack of fitness, we now take a look at how the pandemic has financially affected other sports across Africa.

Basketball’s popularity in Africa is growing, especially with NBA engagement on the continent.

This month would have seen the inaugural Basketball Africa League finals held in Kigali, Rwanda. But they has been postponed indefinitely.

Nigerian club Rivers Hoopers is one of the 12 teams in the 2020 Basketball Africa League.

They, like most basketball clubs in Africa, are state-owned and run – and this means some professional basketball players take up side jobs to supplement their monthly pay.

State-run basketball clubs in Nigeria earn a fixed salary, as they are deemed “civil servants.” This pay ranges from an estimated $185 to $210 monthly.

However, for private run clubs in Nigeria like Raptors, there is a pay-by-play clause during competitions. Out of competition, they fend for themselves while still training.

“In a month it depends on your contract with your team, it can be or $79 or $92. The money we get from basketball is not even enough to do anything,” explained Ginikachukwu Ofuegbu, a 17-year-old rookie with Raptor Basketball club of Nigeria.

Charles Ibeziako, Head Coach and owner of Raptors Basketball Club of Nigeria, said that the teams are heavily dependent on sponsorship – and “when the league finishes, no more payment.”

“The more money sponsors give, the more money we’re going to give the players. But right now, there’s nothing we can do.”

Evelyn Akhator is a forward for Flammes Carolo in the French Women’s Basketball League, winner of the FIBA Women’s AfroBasket with Nigeria.

Playing in France means signing a new contract every year, and pay is estimated to be an average of $20,000 monthly. The price to pay due to the pandemic is the fall in revenue from matchday ticket sales and merchandise.

“I’m still getting paid but from next month (June) our money will be cut. The government is paying 86% so we’re losing 14% percent from the club.

“The other 14%, it’s the team that balances out. For sure they are losing,” says Akhator who was drafted by the Dallas Wings of the Women’s National Basketball Association (WNBA) as the 3rd overall pick in the 2017 WNBA Draft.

The French Women’s Basketball League has been stopped with no winner, and no relegation places.

“I’m mad – we supposed to get bonuses, but this pandemic came and now we don’t have bonuses. If you’re top four (of the league) you get bonuses, if you get to finals or semi-finals – that’s how you get your bonus.

“It’s depressing but we can’t control that aspect. We can only control how we respond to it.

South Africa is the most successful African nation – in rugby union and rugby sevens.

But the rugby industry in South Africa is likely to see a massive revenue drop due to the coronavirus pandemic.

“In the worst-case scenario – that being no rugby played again in 2020 – the industry as a whole could see revenues drop by R1.2 billion ($65m)” notes Eugene Henning, CEO of MyPlayers, an organisation for professional rugby players in the country.

“Contingency plans have been made to absorb revenue shortfalls of between R700 million and R1.2 billion.”

Rugby stakeholders – South Africa Rugby, players, employers and staff – will all take pay cuts starting at the end of this month to, potentially, 31 December 2020. These cuts will be scaled according to the amount earned.

According to Henning, the salary reductions will contribute only 25% of the industry’s savings – that is 12.5% for players and 12.5% for administrative and coaching staff.

“The industry’s primary objective was to safeguard the professional game against a complete collapse post the Covid-19 pandemic – ie to collectively absorb as much of the revenue losses as possible in a responsible manner that would leave the industry in a position to resume “business as usual” once our players return to play,” he added.

Water sports have also taken a big hit as centres dedicated for events such as swimming, diving and rowing have been closed. Professionals have had to develop unlikely home routines such as showering for longer just to experience water, and lifting weights.

“I already lost 10,000 euro – a huge percentage of my budget for this year,” said Privel Hinkati, a rower from Benin who had already qualified for the Tokyo Olympic Games.

“The thing is, corona has changed everything. Everything is postponed now – cancelled, we don’t know yet – so I lost a lot of money on flight tickets and accommodation for this year,” he added.

Hinkati’s competitions are in Europe or the USA during spring.

“Some you can have refund maybe 50%, or maybe you can have a voucher – but still you don’t know what the company may decide, so it is a lot of money.”

Hinkati is not a professional rower, and works part-time as an IT engineer.

“It is a very expensive season because of preparations normally – but it is a lot of money, so my challenge for next year will be to find the same amount of money.”

“I am having huge withdrawal symptoms.”

“Prior to the pandemic, I was planning on being away from home for most of the rest of year,” she explained.

“It is hard to say how the rest of the year going to pan out. We have about 10 events that have been moved or postponed. Six of those have been moved to next year already. That is a pity but a big big positive is that we haven’t lost those events even though they going to happen next year.”

“I know that our Sunshine ladies Tour and Womens Professional Golf association here have helped us professional golfers for the next two months with a little bit of stipend to help us with our expenses, so we appreciate that very much,” she said.

“Our biggest worry though during this time is the people in our community own earn money on a day to day basis or weekly basis that are unable to do that for now and don’t have food.”

“I am sponsored to travel to Europe to play in these events and maybe I am not going to be playing in as many events this year. I am making provisions for that and just trying to plan now for later.”

Primarily, this is because the cricket season in South Africa happens over the winter – and it had finished by the time the coronavirus arrived in the country.

However, the franchise income does not include centralised contracts from the national team or other leagues around the world, nor Endorsements.

Kaya Zondo, a South Africa international who plays for the Dolphins, said covid has still had a “major impact” on the season and cost players their form.

“The uncertainty makes one consider post-career planning – and that in itself is a positive as we should be planning for that anyway,” Zondo added.

“As players, we taking our guidance from the franchises and government but we remain hopefully that the game will return. I would not say that I’m scared but what I can say is that this has been a major wake up call to all sportsmen.”

Even the lifestyle sport of polo has not been spared.

The sport, which is one of the few where a mixed team of men and women take part, has taken a hit even as it struggles to attract a professional status in Africa.

Neku Atawodi-Edun, the first black female professional polo player, said that looking at her finances “the only thing I could do was laugh – to stop me from crying.”

“We’ve got a large percentage of players for whom it’s very hand-to-mouth: hand to your mouth; to your horse’s mouth; to your grooms and your pilot, everybody that is part of your organisation.

“If you want to earn money, you have to keep playing.

‘’With polo, it’s quite tough because normally if you’re having financial difficulties, you would just sell a horse – but who’s buying horses right now?”

The 32-year-old, who has been a professional for 12 years, added that polo has special difficulties because the costs continue to mount whether there is play or not.

‘’The sport is quite unique in its financial structure,” she said.

“As opposed to perhaps football where if I’m not playing football my cost stays at zero – I might not be earning but at least I’m not spending – with polo, as long as you own a horse, you’re always spending. It’s a living thing.”

The dynamic further differs with female polo players who, until a few years ago, had never had a specific tournament dedicated to women’s polo teams.

‘’We earn less than the men but then the cost is pretty much the same as the men.

‘’If you’re female player and you’ve got five horses and there’s guy with five horses he’s being paid, don’t know, five times what you’re being paid. Your cost for those five horses is exactly the same so it’s really difficult for female players that are playing full time professionally.’’