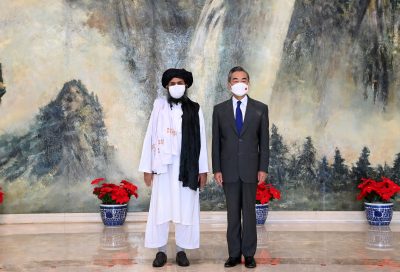 The political vacuum left in the wake of the US exit from Afghanistan and swift Taliban takeover is likely to embolden jihadi militant groups, provide a sanctuary for the resurgence of terrorism and consolidate the country’s status as an attractive destination for foreign fighters. The shift in the centre of gravity from the Middle East to Afghanistan will potentially lead to greater instability in the region, which will increase China’s cross-border concerns. While Beijing appears to have stepped up its engagement with the Taliban regime, it is reluctant to play a more salient role in stabilising the country.

As Chinese President Xi Jinping’s recent remarks urging Afghanistan to eradicate terrorism and promising to provide more aid to the country indicated, Beijing cannot afford the risk of a spill-over of instability into Xinjiang. Uyghur refugees currently living in Afghanistan could become exposed to radicalisation and terrorism. The close nexus between its economic and security interests increases the stakes for Beijing. Longstanding concerns about Afghanistan becoming an external stronghold for anti-China separatist forces have led China to strengthen counterterrorism and security cooperation with its Afghan counterparts. The Taliban’s newly captured weapons and resources could be channelled to other terrorist groups, fomenting greater regional instability.

Beijing will likely continue to strengthen security along the border Xinjiang shares with Afghanistan and cooperate with its proxies in South and Central Asia. This will mainly be done through the Shanghai Cooperation Organisation, of which Afghanistan is an observer.

A stable Afghanistan is essential as access to the country’s road and rail links will be critical to Beijing realising its plans to build the China-Pakistan Economic Corridor (CPEC). Baloch and Sindhi insurgent groups have framed Chinese CPEC investments in the region as imperialism or neo-colonialism to draw sympathy or support for their cause and to justify attacks. The case of the long-stalled Mes Aynak copper mine deal reflects the complex nexus between Beijing’s economic and security interests in Afghanistan.

Beijing is taking a cautious and pragmatic approach to the Taliban’s promises to restore stability to avoid the mistakes of the United States and its NATO partners. Chinese State Councillor and Foreign Minister Wang Yi stated that Beijing will ‘push for reconciliation and reconstruction in Afghanistan with respect and at the request of the Afghan people’. Wang also referred to the Taliban as a ‘pivotal military and political force in Afghanistan’ but stopped short of recognising the Taliban as the de facto government.

Beijing is not taking a direct role in post-war reconstruction efforts in Afghanistan for several reasons. With the United States no longer serving a stabilising force, the Taliban leadership lacks the support and trust of the international community. While Chinese media have framed the US ‘long war’ in Afghanistan as a failure, the Taliban’s staying power is questionable. The Taliban’s brutal imposition of social restrictions on women in the 1990s has also cast doubts on the Taliban’s willingness and ability to ensure inclusivity under its rule. There is also the potential for the Taliban to co-opt other jihadist militants in the country and facilitate greater chaos in the country.

The tacit support Beijing has extended to the Taliban regime has two aims. Beijing wants quid pro quo concessions from the Taliban because of its security considerations in Xinjiang. Working with the Taliban also presents a strategic opportunity to prove the superiority of its political system and governance and to demonstrate a peace-building model that seeks regional stability through economic development. A ‘wait and see’ approach, informed by calculations of the risks and opportunities latent in the geopolitical and local developments on the ground in Afghanistan, is Beijing’s preferred approach.

China’s ability to invest in military and private security forces remains constrained largely due to its adherence to the principle of non-interference. Other factors include diplomatic concerns, a lack of capability and doubts about the effectiveness of military solutions. These concerns are compounded by their unfamiliarity with the Afghan geographical terrain and the potential for the Chinese military and security presence in Afghanistan to inflame local grievances.

The old conventional ‘war on terror’ approach — which ushered in the US invasion of Afghanistan and two decades of counterinsurgency operations in the country — was defined by a largely militarised counterterrorism response. This focus on short-term gains, rather than long-term gains attuned to political realities on the ground, largely defined the failure of the US approach to terrorism. As a rising power with an increasing presence globally, China must now avoid the mistakes of the United States and seek to take matters into its own hands. Counterterrorism efforts should be guided by an understanding of historical and structural forces that give impetus to terrorism.

Beijing also faces a credibility issue throughout Asia and Africa. Some Muslims are measuring China’s intentions towards them against Beijing’s treatment of its citizens, including the ethnic and religious minorities in the borderlands. China may need to pay more attention to the perceptions of local communities. Beijing may also need to demonstrate its commitment to respecting and protecting the rights of broader segments of the Muslim population while safeguarding its interests from jihadist militant attacks.

Stefanie Kam is Associate Research Fellow at the S Rajaratnam School of International Studies, Nanyang Technological University and a PhD candidate at the Crawford School of Public Policy, The Australian National University.