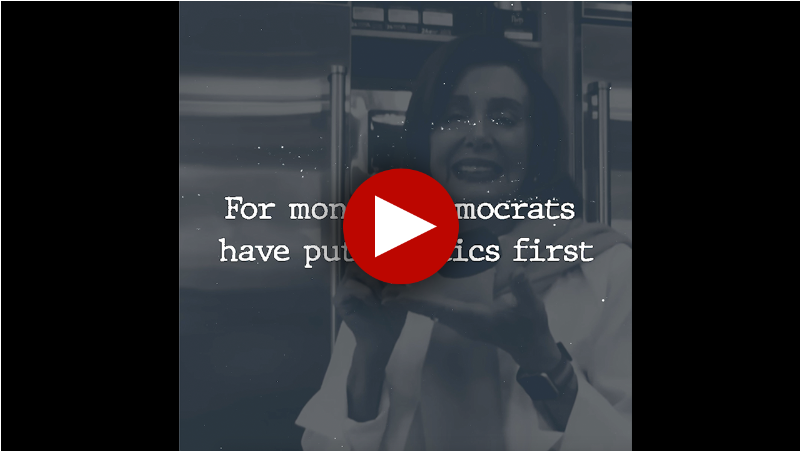 The following clips show how time and time again, Democrats – led by Speaker Pelosi – have prevented commonsense legislation that would help the American people, opting to put their political agenda before the best interest of the country. Watch the video below and please share it so Americans understand why Speaker Pelosi is responsible for blocking key relief from reaching individuals and families that need it:

Yesterday, Senator Schumer moved to adjourn the Senate until after the election in November in protest of the upcoming vote to confirm Supreme Court nominee Amy Coney Barrett, who proved her immense qualifications during last week’s hearing.

This move came ahead of a planned vote in the Senate this week to extend the successful Paycheck Protection Program so workers and small businesses in need can access the unspent funds still remaining in the program, and another scheduled vote to provide additional COVID relief.

Ahead of the votes that will take place today and tomorrow, Leader McConnell spoke on the Senate floor and explained how Democrats’ “all-or-nothing obstruction” is blocking any relief from reaching those who are struggling due to the pandemic:

LEADER McCONNELL: “This week, the Senate will vote on more coronavirus relief that Congress could deliver to American families right now. Month after month, Speaker Pelosi has held up urgent assistance for workers, families, schools, and our healthcare system. Month after month, she has refused to set aside non-COVID-related demands and far-left policy riders that she knows are sabotaging any shot at a deal.

“Why? Because — and these are her own words — she thinks agreeing to a bipartisan compromise might make Democrats seem like, quote, ‘a cheap date.’ Her words. The Speaker has said over and over again that she does not believe it’s better for workers to get ‘something’ rather than ‘nothing.’ And thus far, Senate Democrats have gone along with it. We could have passed hundreds of billions of dollars in relief more than a month ago. But our Democratic colleagues voted in lock step to filibuster the relief and kill the bill. Unless Democrats got every single non-COVID-related wish list item they were after, American families would get nothing. Every single Senate Democrat voted to filibuster hundreds of billions of dollars in noncontroversial assistance — except our colleague who is running for Vice President. She did not manage to vote at all.

“This has been their position for months. All-or-nothing obstruction. It’s got to stop. The Speaker’s Marie Antoinette act needs to end. Zero dollars for working families but a whole lot of television time for the Speaker of the House is not a good trade for the American people. Speaker Pelosi’s supposed leverage is not putting food on the table in households where one or both parents have lost their jobs. Speaker Pelosi’s so-called leverage is not helping schools reopen safely or struggling small businesses avoid layoffs. The Democrats’ talking points are not doing a single thing to fund more testing, more tracing, or double down on Project Warp Speed so we can produce and distribute a vaccine. So tomorrow and Wednesday, the Senate is going to vote. We will see whether our Democratic colleagues in this chamber agree that families deserve nothing rather than something… or whether they are ready to let the Senate make law across the huge areas where we do not even disagree.

Tomorrow, we’ll have a standalone vote on creating a whole second round of the historic Paycheck Protection Program for the hardest-hit small businesses. The PPP has saved tens of millions of American jobs and kept Main Streets across America from turning into permanent COVID-19 ghost towns. The program is as bipartisan as it gets. Not only did it pass unanimously in the first place; we also added funding and made tweaks several times without a single objection in either chamber. So tomorrow, Tuesday, every Senator will cast an up-or-down vote on establishing a whole second draw of these emergency loans for the small businesses that need it the most. No more all-or-nothing. No more endless posturing. Just one, clear vote… on one, clear good thing… that nobody even says they oppose. It would make a huge difference for workers who may otherwise be laid off.

“And then, on Wednesday, the Senate will vote again on a larger bill. It would pour hundreds of billions of dollars into that PPP expansion plus more federal unemployment insurance, more money for safe schools, more money for testing, more money for vaccines, and many other important priorities. Nobody thinks this proposal would resolve every problem forever. What it does contain is half a trillion dollars of good that Congress can do right now, through programs that Democrats do not even say they oppose.

“American families deserve for us to agree where we can, make law, and push huge amounts of money out the door while Washington continues arguing over the rest. It’s common sense. It’s what the country needs. I hope our Democratic colleagues will finally let it happen.”