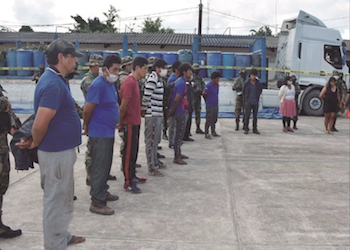 Officials from Bolivia’s interim government have stepped up drug trafficking operations over the last six months, but a focus on coca-producing communities in Cochabamba is creating tension with law enforcement that threatens to intensify.

The drug traffickers were reportedly attempting to protect their drug laboratory, where 37 kilograms of cocaine were later found. Residents in the nearby towns of Shinahota, Chimoré and Villa Tunari broke quarantine rules to seek out police officers and remove them from the area. Residents said police presence wasn’t necessary, as the military was also in the area carrying out similar patrols.

This was but the latest clash between authorities and drug gangs in Chapare in 2020.

In April, authorities also captured Edwin Douglas Lima Lobo, the leader of the Lima Lobo clan based in the Chapare, who had been on the run since being sentenced to 15 years in prison in 2008.

Reports of laboratory raids and cocaine seizures suggest that the interim government is taking a markedly different approach from that of former president Evo Morales, who began his career as a coca activist in Chapare.

“Our country was becoming a paradise for drug traffickers,” Murillo said in February. “Today, they are scared and trying to hide.”

Prolific coca production in Cochabamba, and especially Chapare, has long made it a hub for drug trafficking activity. And while the Morales government did allow some legal coca activity there, critics argue this was poorly enforced.

A 2019 US State Department report quoting UN figures said that “90 percent of the Chapare region’s coca cultivation is destined for illicit coca production and not traditional consumption.” Even much of the coca intended for legal consumption is reportedly “diverted” from land transportation checkpoints, where corrupt law enforcement turns a blind eye or accepts bribes.

Some of that coca arrives to drug labs before being sent through Paraguay and Brazil, and then onto Europe, Africa and other parts of the world, according to the European Monitoring Centre for Drugs and Drug Addiction.

But despite the bold claims made by Murillo, the levels of coca eradication in Cochabamba under the interim government are similar to those seen under Morales.

While the coronavirus pandemic has contributed to this halt, the decision is likely also political. Coca grower unions in Cochabamba are well organized and loyal to Morales and his political party, the Movement to Socialism (Movemiento al Socialismo – MAS). Morales was “president in perpetuity” of the coca growers’ federation in Chapare, according to the US State Department.

Sending armed officials into rural areas to destroy the crops of farmers poses obvious political risks ahead of an election that MAS is still favored to win.

Adding to this is the Chapare’s particularly complicated history with coca eradication, which has fueled decades of racism and human rights abuses against poor, rural and largely indigenous communities of coca growers.

The US Drug Enforcement Administration (DEA) and other anti-drug agencies have been tied to instances of violence, arbitrary arrest and torture in the Chapare — all in the name of coca eradication. Interim President Jeanine Áñez has not made herself an ally to that demographic either after a series of racially loaded comments about indigenous people.

“We are not drug traffickers,” Leonardo Loza, Executive of the Six Federations of the Tropics of Cochabamba, told local media. “We are not terrorists. We are not seditious. We are humble people.”

Morales and many other MAS members began as coca farmers in Cochabamba before rising through the ranks of local and regional government, creating deep bonds of trust. The interim government has not fostered these same relationships and has faced protests in Chapare since 2019.

A focus on destroying drug labs and replacing corrupt law enforcement officials makes sense ahead of the election. But the expulsion of police by residents of Chapare suggests their patience for intrusive government action is already running short.