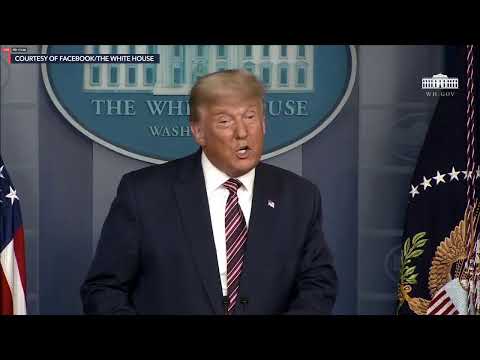 [embedded content]
* Donald Trump appears for the first time in more than 36 hours, speaking in the White House briefing room
* His lead in must-win Pennsylvania is slipping rapidly and crossed under 75,000 as he spoke while lead in Georgia has halved in 24 hours; Biden is holding wafer-thin leads in Arizona and Nevada
* Nailbiting election appears unlikely to be decided until Friday at the earliest and is certain to end up in multiple courts
* Trump has already announced his campaign will sue in battleground states that Joe Biden won
* His team launched legal action in Nevada – a state that could hand Joe Biden the presidency – and is litigating in Pennsylvania and Georgia ‘STOP THE COUNT!,’ Trump tweeted Thursday morning
* Hours earlier Joe Biden had pleaded for calm and patience as tensions mount over the lengthy wait for results
* Biden made statement from Wilmington, DE, with Kamala Harris at his side and said he was confident he would win
* Trump supporters, some of them armed, descended on counting centers to demand every ballot be counted and in other places to stop the count on Wednesday night, fueling fears of public disorder
President Donald Trump on Thursday called the entire election process into question, claiming it was rigged against him from start to finish in an extraordinary White House statement which television networks turned off.
He claimed he was the victim of a conspiracy by ‘big media, big money and big tech,’ for ‘historic election interference.’ He claimed that if all ‘legal votes’ were counted he would win the presidential election as he charged Democrats with trying to steal the contest ‘corruptly’ in a suddenly-announced White House address delivered as his voting leads in Pennsylvania and Georgia slipped further.
WNU Editor: Wow! I thought I would never see this in my lifetime. The President of the United States in a public address on an important political story concerning the election process being cut-off and censored the way he was.
First it was Facebook and Twitter censoring and closing accounts that questioned the voting process. And it has spread from there. This afternoon I saw one person on Canadian news (CTV News) get immediately cut off when he started to list the counties in Michigan where there were more votes than registered voters. Twitter accounts that I have been following for information on this election have now been suspended. And now it is the President being cut-off!?!?!?
Why is the mainstream media acting in panic mode? Stifling out dissent and questions concerning the election process. Why are the social media giants doing the same thing. And going one step further. Suspending accounts almost immediately.
You tell me.
Update #3: On a side note.
I started this afternoon to accumulate and gather election data information. I was inspired by this Zero Hedge post …. Why Does Biden Have So Many More Votes Than Democrat Senators In Swing States? (Zero Hedge), and I said to myself why not do your own digging for oddities in this election cycle. I know this will not change the election. But I will admit that I am curious, and I just want to know if there is anything there. I will put up a post on Sunday summarizing what I have found …. or not found.
Update #4: It is amazing what a difference 4 years makes. Four years ago the main stream media pushed the narrative with no evidence that Trump won the election because Russia helped him. Today. When people are raising questions on what is happening. They are shut down.