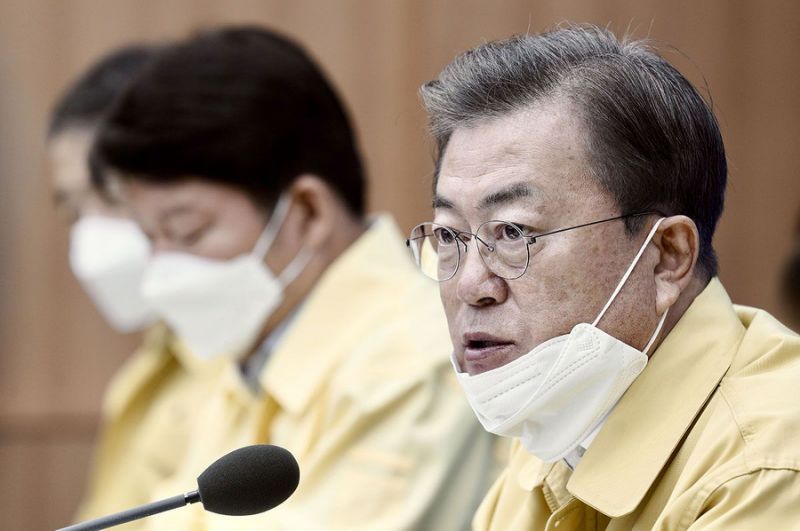 The ruling Democratic Party of Korea and its satellite group won 180 places in the 300-seat National Assembly, according to data from South Korea’s election commission. Voter turnout was at about 66%, the highest in 28 years, and the results were seen as a show of support for Moon’s handling of the coronavirus outbreak.

“This is a reminder that people respond to steady, trustworthy leadership in times of crisis,” said Mintaro Oba, a former American diplomat who worked on Korean Peninsula issues. “Moon Jae-in showed you can win elections on a cult of competence instead of a cult of personality.”

Shares of companies in South Korea’s nuclear power industry fell in early trade Thursday on worries that Moon victory’s would add to his push to cut back on nuclear power.

“Policies that have met with opposition will now be passed more swiftly, and that’s going to reduce policy uncertainties,” said Nam Chang-woo, an economist at the Korea Development Institute. “Given the economy is falling into doldrums, it won’t be easy to implement chaebol reforms right away, but they could come when the economy starts to recover.”

Still, Moon fell short of the necessary two-thirds majority needed to enact more significant changes requiring constitutional amendments, such as allowing future presidents to serve more than one term. That term limit will increase attention on potential successors led by former Prime Minister Lee Nak-yon, who defeated opposition leader Hwang Kyo-ahn, in one of the election’s most closely watched races.

Hwang said he would step down from his post in the United Future Party. The conservative group picked up seats to reach a total of 103, but mostly at the expense of smaller groups in parliament and not the ruling party.

Like other world leaders, Moon stumbled in his early response to the pandemic, having predicted that the virus would be terminated “before long” only to see cases spike days later. But the government’s focus on mass testing and isolation of the sick to corral coronavirus clusters has been credited with a sharp slowdown in the spread, with new cases now at their lowest levels since February.

His approval rating shot up to 56% from 42% during the crisis as South Korea won global praise for its response to the outbreak.

South Korea’s decision to hold the election contrasts with some U.S. states that have delayed presidential primaries and France, which suspended some local elections after cases began to multiply. Poland plans to conduct its May 10 presidential election by mail-in ballot.

U.S. Secretary of State Michael Pompeo congratulated South Korea on successfully holding an election, saying its “dedication to democratic values in the face of a global pandemic is a hallmark of a truly free, open, and transparent society — qualities that are necessary in facing the current crisis.” He called it “a model for others around the world.”

South Korea took precautions to keep voters safe: They were required to stand at least one meter (3 feet) apart, cover their faces, wear disposable gloves and be ready to submit to temperature checks, while voting booths were frequently disinfected.

The virus provided an opportunity for Moon to rebuild support battered by an economic slowdown, corruption scandals involving presidential aides and resurgent tensions with North Korea, which fired missile barrages on the eve of the election in a show of force. The vote came about halfway through Moon’s single, five-year term, a point when an electoral defeat made his predecessor, former President Park Geun-hye, a lame duck and ultimately paved the way for her impeachment and removal.

Before the results were released, South Korea unveiled a second extra budget worth 7.6 trillion won ($6.2 billion) to pay for emergency cash handouts to people as the virus threatens jobs and wages.

“We’ve seen more defeats of a ruling party in interim elections in Korean history, so this is a rare case that a sitting president wins,” said Lee Jae-mook, who teaches political science at Hankuk University of Foreign Studies in Seoul.

Postponing the election would have been a worrisome precedent, with many Moon supporters being among those who took to the streets in the 1980s to end autocratic rule.

“South Koreans have been traumatized by living under the authoritarian regimes of the past and see elections as essential,” said Duyeon Kim, a senior adviser on Northeast Asia and nuclear policy at the International Crisis Group.