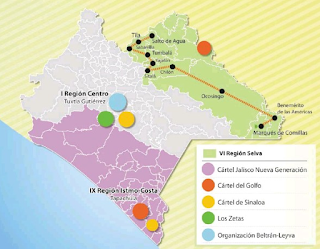 “leChef” and “MX” for Borderland Beat

At least six drug trafficking organizations operate in the southern state of Chiapas. According to intelligence reports from Mexican federal authorities, the Sinaloa Cartel and the Jalisco New Generation Cartel (CJNG) are fighting for the control of the drug corridors near the Chiapas border with Guatemala and maintain control of municipalities near the Pacific coast.
Meanwhile, Los Zetas control Tuxtla Gutierrez, the state capital, as well as the metropolitan area and part of the state’s central municipalities. The Beltran Leyva Cartel, the Gulf Cartel and the San Juan Chamula Cartel also have some presence in at least 15 different areas in Chiapas.

Two Central American gangs, the Mara Salvatrucha (MS-13) and 18th Street Gang (Barrio 18), also have presence in the area. The report also cites the presence of five paramilitary and/or subversive groups.
Report details
Gilberto Zavala Páramo (“Don Gil”) is cited as the ring leader of the Sinaloa Cartel in Chiapas. José Inés Landero Barrero (“El Apestoso”) is the CJNG regional boss. Both men are fighting for the control of the following towns: Arriaga, Tonalá, Cintalapa, Pijijiapan, Mapastepec, Acapetahua, Villa Comaltitlán, Mazatán, Tapachula, Ciudad Hidalgo, Frontera Comalapa, Motozintla, Siltepec and Ángel Albino Corzo.
Don Gil reportedly has the backing of Faustino Damián Castro (“El Patrón”), one of the lieutenants in charge of illicit operations in Huehuetán, Mazatán, Acapetahua, Suchiate, Frontera Hidalgo and Tapachula.
Los Zetas are headed by Adán Juárez Gómez (“El Pelón”), who oversees the capital and the metropolitan area, including: Mezcalapa, Soconusco, the Lacandona jungle, Chiapa de Corzo, Berriozabal, Comitan de Dominguez, Las Margaritas, Ocosingo and Palenque.
Although the Beltran Leyva Cartel has been severely weakened over the years, they have several members in the area under Marco Antonio Zetina Ricardez (“El Zetina”) in Palenque. This corridor is a major route for Central American immigrants who make their way to the U.S. The San Juan Chamula Cartel is led by a man known by his alias, “El Caracol”. The Gulf Cartel operates on the Chiapas border with Veracruz and Tabasco.
Mexican authorities also detected the presence of Central American gangs such as the Mara Salvatrucha (MS-13) and 18th Street Gang (Barrio 18). They have been linked to homicides and drug sales in Arriaga, Cacahoatan, Escuintla, Frontera Hidalgo, Huixtla, Metapa de Dominguez, Mapastepec, Palenque, Pijijiapan, Ciudad Hidalgo and Tapachula.
Paramilitary and subversive groups
Other perpetrators of violence and social unrest in Chiapas include subversive and paramilitary groups, which have been around for several years. The report mentions at least five of them in Chiapas.
The most famous one is the Zapatista Army of National Liberation (Ejército Zapatista de Liberación Nacional, EZLN), which has presence in the municipalities of Ocosingo, Altamirano, Larrainzar, Chenalho, Las Margaritas, Tonala, Palenque, Salto de Agua, Tumbala, and Benemerito de las Americas.
The report also cites the Popular Revolutionary Army (Ejército Popular Revolucionario, EPR), which is active in Villaflores, Villa Corzo, La Concordia, Angel Albino Corzo, Venustiano Carranza, Motozintla, San Cristobal de las Casas, Salto de Agua, Altamirano and Ocosingo.

There is also a group known as Movimiento por la Paz con Justicia y Dignidad, headed by Oscar Sanchez Alpuche, which has presence in the communities of Salto de Agua, Tila, Sabanilla, Tumbala and Palenque. The report identifies this organization as a subversive group.

In addition, the report mentions a paramilitary group known as Chinchulines, which was born in May 1996 after the government killed their community leader, Geronimo Gomez Guzman. They are based in Chilon municipality and have been linked to various indigenous and campesino movements. For many years, the Chiapas state government denied the existence of armed groups other than the ones committing crimes.