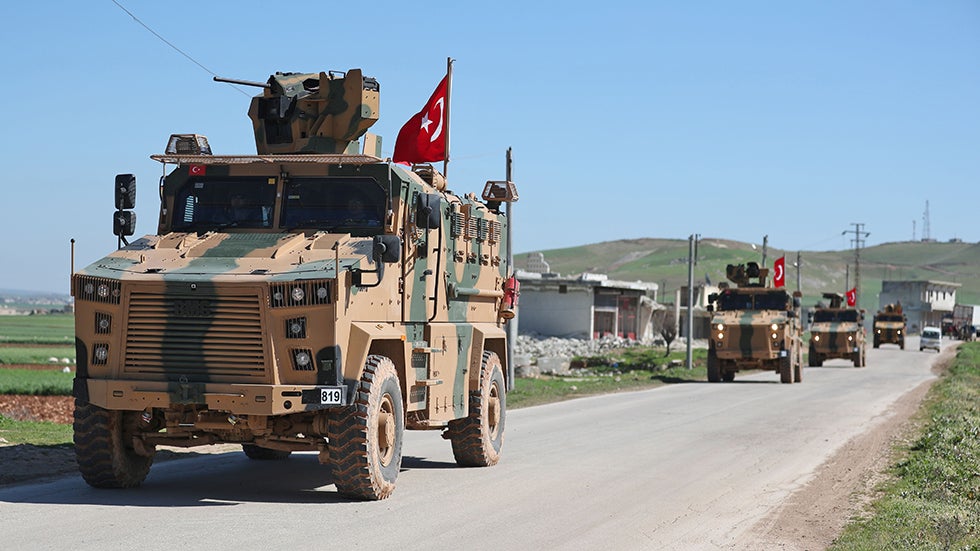 The secret of success for Turkish President Recep Tayyip Erdogan in the Middle East used to be the export of soap operas depicting an ideal Muslim society. A skyrocketing entertainment industry attracting millions of Arab viewers into dramatic plots coincided with the rise of Turkish “soft power” premised on a model of economic strength and multiparty politics that is harmonious with Islam. This has since been steadily replaced with Turkish military muscle in no less than three incursions in Syria since 2016, and a military dilemma in Libya with no end in sight, even as peace talks are unfolding, with the United States nowhere to be found.

Turkey is not new to the region as heir to the Ottoman Empire which, at its height, ruled over the Muslim world and a portion of Europe. Recently, however, its involvement has been a mixed bag. At times, it is responsive to threats, while at others, it is driven by economic interests. Turkey is starting to use might more than diplomacy to project its supremacy. In the last year, it occupied northeast Syria, increased its military presence in Iraq, and intervened heavily in the civil war in Libya. It has set up bases in Qatar and Somalia, and negotiated temporary control of Suakin Island in Sudan and a defense deal with Kuwait, securing a hold in the Persian Gulf and the Red Sea.

Today, Turkey is calling the tune in Syria. Clashes last year between forces backed by Russia and opposition groups assisted by Turkey led to the establishment of a security corridor on the Turkish border jointly monitored by Turkish-Russian forces, though under “rebel” control. Ankara is motivated by a desire to thwart Kurdish national aspirations for autonomy and anxiety about the national security challenge posed by the PKK-affiliated Syrian-Kurdish Democratic Union party. It hopes to establish a buffer zone to resettle some 3.6 million Syrian refugees who are also becoming a liability.

With no political settlement in sight, a gradual Turkification of northern Syria is happening. Having sent over 10,000 troops, a safe zone development plan will now reconstruct these areas under Turkish control, setting up local governments and infrastructure overseen by Turkish authorities. Local governments in Idlib and Aleppo have already adopted the Turkish lira as the region’s legal tender to stabilize prices. But the situation in Syria remains volatile and a military escalation is looming.

Turkey’s Libya policy, hinging around support to the Government of National Accord, is closely tied to the creation of an exclusive economic zone from Turkey’s southern Mediterranean shore to Libya’s northeast coast. Ankara has signed and used a contentious agreement with Tripoli that delineates a shared maritime boundary in the eastern Mediterranean Sea (an area claimed by Greece) to conduct gas exploration activities in contested waters. This has ratcheted up tensions with Israel, Greece, Cyprus and other European nations. In return, Ankara has helped tip the war in favor of the Muslim Brotherhood-friendly Government of National Accord by sending arms and Syrian mercenaries. Qatar bankrolls its actions while the United States remains on the sidelines. Libya has become a free for all.

But Turkey’s intervention in Libya is a gamble, not only because of the unpredictable situation on the ground. The government it backs does not even control the land adjacent to the area delimited by the maritime deal. If the Government of National Accord loses the war, Ankara will lose access to coveted gas fields. Its ambitions may prove especially costly given Prime Minister Fayez Serraj’s imminent resignation despite a new round of negotiations next month in Geneva. Meanwhile, tensions are growing with both the United States and Russia over Turkey’s involvement in northern Syria (Turkey and Russia are on opposite sides of the Syrian conflict.) Libya could turn into the unfinished project that eventually backfires.

The tug of war in the region between malign actors is intensifying, and Turkey is no longer a bystander. Despite setbacks and potential negative spillover of conflicts in Syria, Libya and Iraq, Turkey has emerged as a heavyweight with Erdogan as a new Putin seeking to lead in an order that the United States is clearly absent from. However, the Middle Eastern publics who fell under the sway of Turkish soap operas may not be as receptive to Turkey’s expansionist overtures; they will be reminded of worse times under Ottoman rule. Left unchecked, the consequences of Turkey’s adventurism will endanger, not just its immediate borders, but the entire Middle East and Eastern Mediterranean. The United States will not be spared, as it will be called upon to write a new script.

Patricia Karam is regional director for the Middle East at the International Republican Institute, a nonprofit organization that promotes democracy.