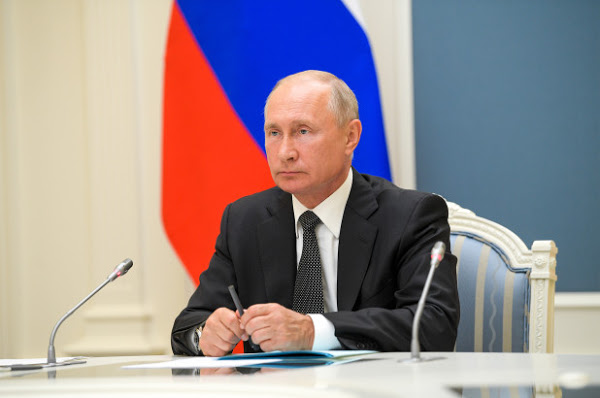 Russian President Vladimir Putin. Alexei Druzhinin\TASS
* Putin, 68, is being urged to quit by his former gymnast lover Alina Kabaeva, 37
* Recent footage of Putin’s legs swinging as he clutched a chair raised eyebrows
* Russian president’s odd ‘gunslinger’s gait’ has been noted by medics in the past
* Comes after law to ensure Putin will be made senator-for-life emerged this week
Vladimir Putin will quit in January amid fears he has Parkinson’s disease, Moscow sources have claimed.
The 68-year-old strongman president of Russia is being urged to retire by his former gymnast lover Alina Kabaeva, 37, insiders say.
Recent footage of Putin’s legs moving around as he gripped onto the armrest of a chair have raised eyebrows.
Eyes are also drawn to a twitching pen in the former KGB operative’s fingers and a cup which analysts told The Sun was filled with painkillers.
Earlier this week it emerged that unexpected legislation was being rushed through to ensure that Putin could be made a senator-for-life.
WNU Editor: I have been wanting to post this story all day. But the U.S. election is dominating everyone’s attention (including mine).
Rumors in Russia that Putin is ill have been making the rounds since the beginning of the year. I have never taken them seriously. But in the past few weeks rumors on Putin’s health have been intensifying, and the quick introduction of this new bill that will make all former Russian Presidents a Senator for life and immunity from prosecution was a surprise …. New bill set to expand Russian ex-presidents’ immunity from prosecution (Reuters).
Here is a few more red flags. In the past when reports that Putin had health problems were being made, the Kremlin was always quick to deny them. They have yet to deny these rumors. Putin has also made very few public appearances since the beginning of the year. The Covid-19 pandemic is the reason that has been often cited. But Putin is like Trump. He is not the type of man who wants to hide in his basement. Bottom line. I do not have to be in the Kremlin to know that something is wrong.
So here is my prediction. If these rumors’ are true, Putin will make his announcement at the end of December. My money is on December 31. Twenty-one years ago on December 31, 1999, Yeltsin unexpectedly resigned and made Putin Acting President of the Russian Federation. It would only be fitting if he resigns on the same day.
More News On Reports That Russian President Putin Will Resign Early Next Year Because Of Parkinsons’