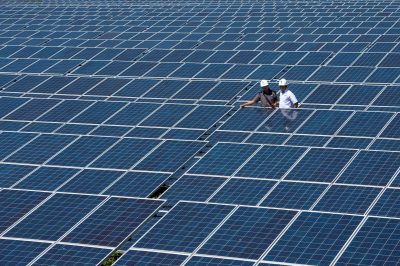 Major disruptions caused by the COVID-19 pandemic show how modern societies depend on access to electricity. With millions of people confined to their homes, distant modes of learning and working — as well as online streaming for entertainment — are now an everyday reality around the globe. Electricity is also critical to operating medical equipment to treat those badly infected with COVID-19. But the comfort of being able to work, learn and play from home should not be taken for granted.

Indonesia is no exception to these challenges. Despite a rapid expansion of electricity access in recent years, nearly 25 million Indonesians still lacked electricity in 2018. While the western part of Indonesia and most urban areas enjoy a relatively stable electricity supply and a reliable grid system, the middle and eastern parts of the country still suffer from regular blackouts and power deficits.

Heeding President Joko Widodo’s call to do everything from home might simply be impossible for those living without sufficient electricity. The pandemic does discriminate — by reinforcing underlying inequalities in access to public services.

Indonesia is struggling to address the energy trilemma of energy access, security and sustainability. The government is making concerted efforts to mitigate energy poverty, particularly through its commitment to achieving energy justice (energi berkeadilan). This is broadly understood as the fair distribution of the benefits and burdens of energy production and consumption across society. It includes sharing benefits and risks in the energy system and aims to ensure the broader participation of key stakeholders in energy decisions. It also recognises the needs of those marginalised by the system.

The government has set an ambitious target to achieve nearly universal electrification in 2020. A significant proportion of this will come from renewable sources. Indonesia aims to achieve 23 per cent renewable energy in the national energy mix by 2025 in alignment with its commitment to mitigate climate change. This has translated into initiatives to accelerate rural electrification by facilitating private participation and investment.

So how is the energy justice vision being realised on the ground?

Ultimately Indonesia’s energy justice vision has led to programs that focus narrowly on distributive energy justice — for example, by ensuring price affordability and energy accessibility. This focus has several implications.

The aspiration to increase energy accessibility through rapidly electrifying rural areas produces policies that prioritise establishing large-scale infrastructure and on-grid electricity expansion. While such an approach may aid Indonesia in meeting its fast-growing energy demands, it might not be feasible for most energy-poor areas. This is especially true in remote places and outlying islands, where geographical challenges preclude a grid-based solution. The situation is exacerbated by the monopoly of the state-owned electricity company, Perusahaan Listrik Negara, that limits the participation of other actors in the electricity sector.

Prioritising price affordability also leads to policies and regulations that set a low price for renewable energy. Consequently, potential investors and developers of renewable energy projects can only make a reasonable investment return with large-scale projects that bring the price of renewable energy under local electricity costs. This imposes substantial disincentives on small-scale investments in rural electrification projects, both by making them too costly and by cutting off viable sources of finance.

The focus on price affordability also shapes policies that favour the ‘cheapest’ energy source. These policies benefit fossil-fuelled power plants — especially coal — that receive significant subsidies from the government. This in turn undermines the pursuit of energy justice in which the use of sustainable energy sources is a crucial element.

Moving forward, the Indonesian government needs to expand its energy policy beyond simply achieving the distributive aspect of energy justice.

Energy policies should adopt more inclusive approaches to transitioning to low carbon energy. This should include developing and implementing measures to enhance transparency, due process and public participation. Special attention is needed to accommodate the needs of energy poor communities, many of which are indigenous or minority groups living in remote areas and outlying islands.

Energy policies also need to encourage and incentivise a diversity of solutions to address energy poverty beyond large-scale and on-grid initiatives. Clear incentives, such as feed-in tariffs and an enabling regulatory environment are needed to facilitate and encourage off-grid and small-scale distributed renewables. Institutional barriers such as the state monopoly over energy production need to be addressed to allow more stakeholders to participate in the energy system.

Addressing energy poverty will likely require diverse sources of finance beyond those structured exclusively by risk and return calculus and bankability considerations. Policymakers should re-engage with the role of public finance, particularly by strategising how public finance can meet the needs of the most vulnerable.

At a time when energy access is more critical than ever, policy makers must address these points so that the energy justice vision in Indonesia can truly be realised.

Dr Abidah B Setyowati is a Research Fellow at the School of Regulation and Global Governance (RegNet), The Australian National University.