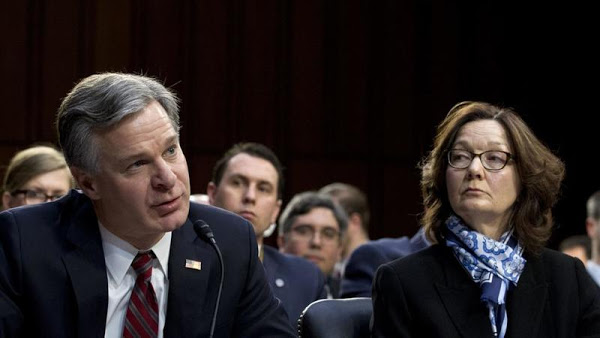 FBI Director Christopher Wray and CIA Director Gina Haspel
If President Trump wins re-election, he’ll move to immediately fire FBI Director Christopher Wray and also expects to replace CIA Director Gina Haspel and Defense Secretary Mark Esper, two people who’ve discussed these officials’ fates with the president tell Axios.
The big picture: The list of planned replacements is much longer, but these are Trump’s priorities, starting with Wray. Wray and Haspel are despised and distrusted almost universally in Trump’s inner circle. He would have fired both already, one official said, if not for the political headaches of acting before Nov. 3.
WNU Editor: US Presidents when elected usually have a list already prepared to put loyalists in cabinet and other senior government positions on Day One of their Presidency. President Trump had a list, but when I reflect upon it, it certainly did not include people who were loyal to him and his agenda. After four years in the White House I suspect that he now does have a list of loyal people, and and I am sure he will be putting them in these government positions after the election. Axios list on who would be fired does not surprise me. I have mentioned more than once on this blog that FBI Director Christopher Wray, CIA Director Gina Haspel, and Defense Secretary Mark Esper will be gone in the second term of a Trump Presidency.
Advertise Here for only $299 mo. Unlimited cpc Adspace ID2