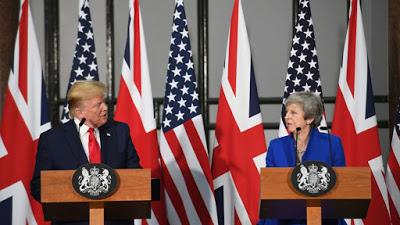 The president is said to have ‘bullied’ Theresa May when she was prime minister
Advertise Here for only $299 mo. Unlimited cpc Adspace ID2

Senior U.S. officials believed President Trump posed a danger to national security after phone calls to other heads of state, according to classified phone calls obtained by CNN.

Trump reportedly told former British Prime Minister Theresa May that she was “a fool” and spineless in her approach to Brexit, NATO and immigration policy. He also told German Chancellor Angela Merkel that she was “stupid” and accused her of being in the pocket of the Russians.

Update #1: Trump said to be ‘humiliating and bullying’ toward Theresa May in phone calls that left her ‘flustered and nervous’ (Business Insider)
Update #2: Donald Trump: Theresa May told she was ‘weak’ during phone call with president, report claims (SKY News)

WNU Editor: I do not know if President Trump said all of these things. This is CNN after-all. But in my book former British Prime Minister Theresa May is the worst politician that I have ever seen. She calls an election when she has a clear mandate to deliver on Brexit and to rule. Loses her majority when she declares in the middle of the campaign that she is going to raise everyone’s taxes?!?!?!? Talk about completely burning your own base. And even though she still manages to squeak in a minority government because the alternative of a Labour government under Jeremy Corbyn was not palatable to the majority in the UK …. she spends the next two years dithering and procrastinating on Brexit. It is not a surprise to me that when she finally left government, her polling numbers were the lowest for a leader in decades. Bottom line. Theresa May as a leader was weak. And as for Angela Merkel. As this blog predicted almost five years ago when Chancellor Merkel declared that Germany would open her borders to accept refugees, she set into motion a sequence of events that would not only be damaging to the European Union, but may never be resolved. The biggest migration crisis in Europe since the Second World War, the original impetuous for the UK to leave the EU, the revival of nationalism on the continent, and a large migrant population that is not assimilating. Using the word “stupid” to describe German Chancellor Merkel and her decisions is a soft description in my book.