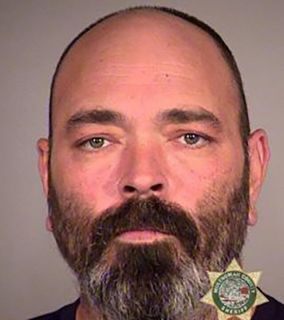 A known member of the far-right group Proud Boys was arrested Wednesday on various charges after allegedly pointing a gun at far-left demonstrators during clashes in Portland two months ago.

He was arrested and booked into Multnomah County Jail on Wednesday morning.

Swinney was first indicted on Sept. 11, about three weeks after far-right and far-left demonstrators clashed outside the Multnomah County Justice Center on Aug. 22.

The district attorney’s office said videos and photographs showed Swinney used a paintball gun to “cause physical injury to another person.” He “then pointed a revolver at someone which placed that person in fear of imminent serious physical injury and that he unlawfully discharged mace or a similar substance toward another person,” Fox 12 Oregon reported.

Police did not intervene in the clashes and cited staffing shortages, Oregon Public Radio reported.

In an earlier demonstration on Aug. 15, Swinney also fired paintballs and mace at far-left demonstrators before attempting to assault others in the crowd, according to the indictment.

Alan James Swinney, 50, was indicted on various charges after allegedly pointing a revolver at a far-left demonstrator.  (Multnomah County Jail)

The announcement came a day after President Trump received criticism over his response to a question about far-right white supremacist groups during the first 2020 presidential debate.

Trump responded to a question from “Fox News Sunday” anchor Chris Wallace, who moderated the debate, asking if he was willing to denounce white supremacists, to which the president replied, “Sure, I’m willing to do that.”

Democratic nominee Joe Biden then suggested Trump specifically condemn the far-right group Proud Boys, to which the president responded, “Proud Boys — Stand back, stand by, but I’ll tell you what, somebody’s got to do something about Antifa and the left because this is not a right-wing problem. This is a left-wing problem.”

Biden received criticism from the other side of the aisle for dismissing the far-left militant group Antifa as “an idea, not an organization,” a reference to how FBI Director Christopher Wray described the group to a congressional panel last week. Though Trump has called on the federal government to characterize Antifa as a terrorist organization.

Meanwhile, demonstrations have continued in Portland over the past more than 120 days, as crowds have repeatedly targeted government buildings and launched projectiles at police officers.