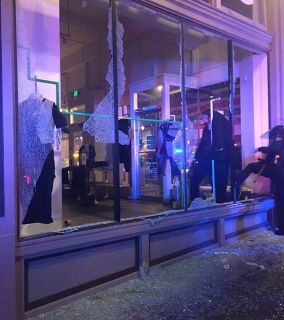 Emergency services in Portland had to be rerouted and were even temporarily blocked by crowds overnight, as hundreds of demonstrators left a trail of damage downtown following Election Day.

A video by KOIN and retweeted by the Oregon State Police early Thursday showed law enforcement officers holding the line preventing a large crowd from entering an intersection in Portland. An announcement can be heard from a police vehicle telling demonstrators why they must disperse.

“There’s a medical call on this block that we need to get to — we need the crowd to disperse to the west,” police say, notifying the crowd they might be subject to arrest and crowd control munitions of CS gas if they failed to leave the area.

The election-related violence is nothing new for Portland, which has garnered nearly nightly demonstrations for about five months in the wake of the death of George Floyd in Minneapolis. Once again, Wednesday evening involved crowds throwing projectiles, including a firework, at officers, breaking dozens of windows to businesses, and damaging private property downtown.

It started when two groups met in separate locations in Portland Wednesday afternoon before converging in the middle of a parkway around 6 p.m., blocking traffic with vehicles and gathering in front of Portland Fire & Rescue Station One. Emergency calls had to be dispatched to other engines and stations, according to the latest update from the Unified Command published Thursday morning.

As votes continue to be counted in key battleground states, and the reelection campaign for President Trump rolls out lawsuits over mail-in ballots used at record numbers during the pandemic, activists have remained at the ready showing a heavy presence in the streets.

Brown, a Democrat, placed the Portland Police Bureau under a Unified Command with Oregon State Police and the Multnomah County Sheriff’s Office earlier in the week to respond to anticipated election-related unrest. Brown activated the Oregon National Guard on Wednesday “to assist officers in responding to acts of violence, and to maintain public order and ensure community safety.” 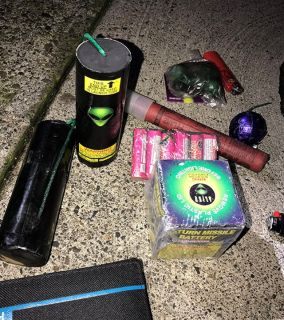 Unified Command released a photo showing the commercial-grade fireworks seized from Beecher at the time of his arrest.

Sheriff’s deputies arrested 23-year-old William K. Beecher for allegedly tossing a firework at officers. Police previously said someone had tossed a Molotov cocktail, but further investigation at the scene proved the projectile was actually a firework. Beecher reportedly was wearing a bulletproof vest and was armed with a loaded rifle and was in possession of several loaded magazines, a knife and other fireworks.

As destructive crowds continued in some areas, people again started to gather in Lownsdale and Chapman Square Parks around 9 p.m. before about 100 left and began walking north toward W. Burnside Street where they had damaged property earlier in the evening. Police provided announcements over a loudspeaker that the group was not to cross W. Burnside Street and that people who engage in criminal acts are subject to arrest or use of force including munitions and CS gas.

“This announcement was met with aggressive actions by participants,” according to the Unified Command update, which said individuals again threw glass bottles at police and blocked vehicle and pedestrian traffic. Police announced to the crowd that the assembly was unlawful and needed to disperse.

Police pushed people back to Interstate 405 before disengaging from the crowd around 11 p.m. At about 11:15 p.m., Oregon State Police troopers stopped a vehicle without a license plate that was interfering with traffic. They discovered the driver had a handgun and arrested him. Wesley C. Fant was booked on a charge of unlawful possession of a firearm.