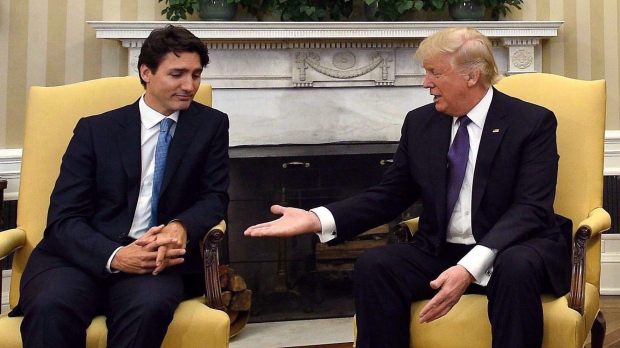 OTTAWA — Amid reports that U.S. President Donald Trump’s administration is considering slapping tariffs on aluminum imports from Canada, Prime Minister Justin Trudeau said the U.S. “needs Canadian aluminum” and would only be hurting its own economy.

“We have heard, obviously, the musings and proposals from the United States that perhaps there needs to be more tariffs on aluminum,” Trudeau said from the front steps of Rideau Cottage on Monday.

“What we simply highlight is: the United States needs Canadian aluminum.”

Trudeau explained that the United States does “not produce enough, nowhere near enough” aluminum to fill domestic manufacturing needs. This means if it slaps tariffs of the Canadian aluminum it has to buy anyways, it’ll simply increase the cost for the American consumer.

“If they put tariffs on Canadian aluminum, they’re simply increasing the costs of inputs, necessary inputs, to their manufacturing base which will hurt the American economy. Again, we see that our economies are so interlinked that punitive actions by the United States administration end up hurting Americans the same way they end up hurting Canadians,” Trudeau said.

CTV News confirmed the possibility of the U.S. slapping another set of tariffs on Canada one week ago. The tariffs would fall under Section 232 of the U.S. Trade Expansion Act, and the threat comes amid U.S. claims that their aluminum market is being flooded by Canadian product.

Two Canadian sources told CTV News that the announcement is possible in the coming weeks.

Should the U.S. decide to re-impose tariffs on Canada, it would re-open a trade rift between the two countries that had been healing since similar tariffs were lifted just over a year ago. The trade spat saw tariffs lobbed back and forth between the two countries, including Canada’s decision to slap tariffs on a wide array of U.S. products including quiche, mayonnaise, and toilet paper.

The agreement to lift those tariffs came amid indications that new NAFTA trade talks were moving in a positive direction in May 2019. That trade agreement has since been ratified by all three countries — Canada, the U.S., and Mexico — and comes into effect on July 1.

When the new tariff threat was first reported last week, Treasury Board President Jean-Yves Duclos made a similar argument to the one Trudeau launched Monday.

“The use and the production of aluminum in Canada is no harm and no threat to our American friends and neighbours…in fact, the free flow of aluminum across our border is a mutual benefit to both countries and workers in both countries,” Duclos said.

When the NAFTA comes into effect on Wednesday, an agreement within the deal regarding aluminum use also comes into force — one that requires 70 per cent of the steel and aluminum used in auto production to be purchased in North America.

“[This] reinforces even more the interest of Canada and the United States to work together,” Duclos said.

Speaking during his Monday press conference, Trudeau also said the government is considering what steps need to be taken amid a looming deadline for the current border closure with the United States.

On June 16, Trudeau had announced the decision to keep the border closed to all non-essential or “discretionary” travel until July 21, which was already an extension of the existing agreement with the United States.

Speaking Monday, he said the government will continue to assess the situation at our shared border.

“We have extended the border measures with the United States until July 21. We will continue to assess the situation and work with the Americans on what steps need to be taken into the month of August,” Trudeau said.

His comments come amid a global surge in COVID-19 cases. Just over one week ago, a record number of new COVID-19 cases was reported worldwide — including the largest one-day increase on record, with 183,020 new reported cases.

The United States reached the macabre milestone of being home the world’s highest number of reported infections: more than 2.2 million. It also has the highest death toll in the world, with 120,000 deaths, according to Johns Hopkins University.

Last Monday, the day after the global surge of COVID-19 cases was first reported, Trudeau said the health of Canadians remains the top priority when considering the loosening of any border restrictions.

“We are going to be very, very careful about when and how we start reopening international borders,” Trudeau said.