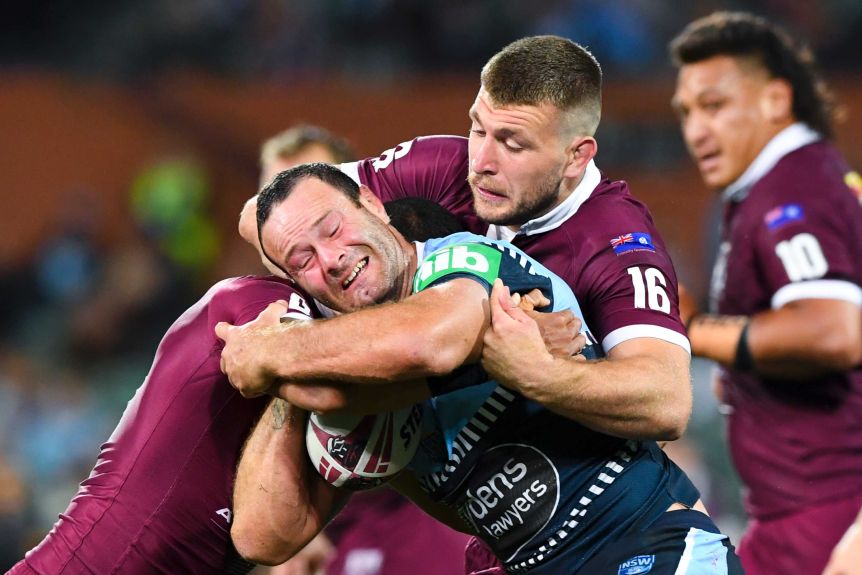 The NRL’s concussion protocols have been questioned after Blues skipper Boyd Cordner was cleared to return to the field following a troubling head knock in Wednesday’s State of Origin opener.

The NRL has launched an investigation into how Cordner was cleared of concussion by New South Wales medical staff in a head injury assessment after a seemingly innocuous blow.

The dazed 28-year-old was taken from the field for a HIA (head injury assessment) but later returned to the field after passing protocols.

Those protocols have now come under fire from a leading clinician in concussion and dementia services at Macquarie University, Dr Rowena Mobbs, who has called for a review into the HIA process.

A clinical co-director of the Australian Sports Brain Bank, Dr Mobbs assesses high-profile Australian sports people who have suffered years of head knocks, and has authored a study on chronic traumatic encephalopathy (CTE).

“Players are clearly concussed at the time of impact on the field,” Dr Mobbs said.

“The crowd and commentators can see that this is a brain injury.

“There is video evidence of brain injury and they should be off for the game, and the next, with all caution taken.

“Australia has a long way to go in this field of research to understand the risk of CTE.

“We are calling for a national repetitive head trauma initiative that will involve neurologists providing a proper assessment of this long-term risk.”

The incident has reignited a simmering concern over Cordner’s playing future, but NRL teammate Luke Keary insists players have to trust they’re not being put at risk by head injury experts.

The NSW and Sydney Roosters stars have battled concussion complications over the past two years, both spending time out of the game on club orders.

But questions around Cordner’s health and future were again raised on Wednesday night.

Concern for Cordner has grown in recent months after he admitted to suffering ongoing concussion symptoms, with some calling for the inspirational forward to retire.

This season alone, he suffered three rounds of concussion and was sidelined by the Roosters for six weeks as he dealt with persistent headaches.

It was a cautious approach by the club, which also managed Keary in a similar manner in 2019.

“It’s hard because as players we’re not experts in the field so we’re just going off the professionals’ opinions,” Keary said on Thursday.

“You can only go off the experts’ opinion and you’ve just got to trust they’re not putting you at risk.”

NSW coach Brad Fittler said he would speak to medical staff and to Cordner before naming his 21-man squad to take on Queensland on Wednesday night.

However, it’s understood he is contemplating making the tough call to leave him out of Game II in Sydney.

Should the Blues skipper play at Sydney’s Olympic stadium and cop another head knock, it would cause significant concern for his playing future.