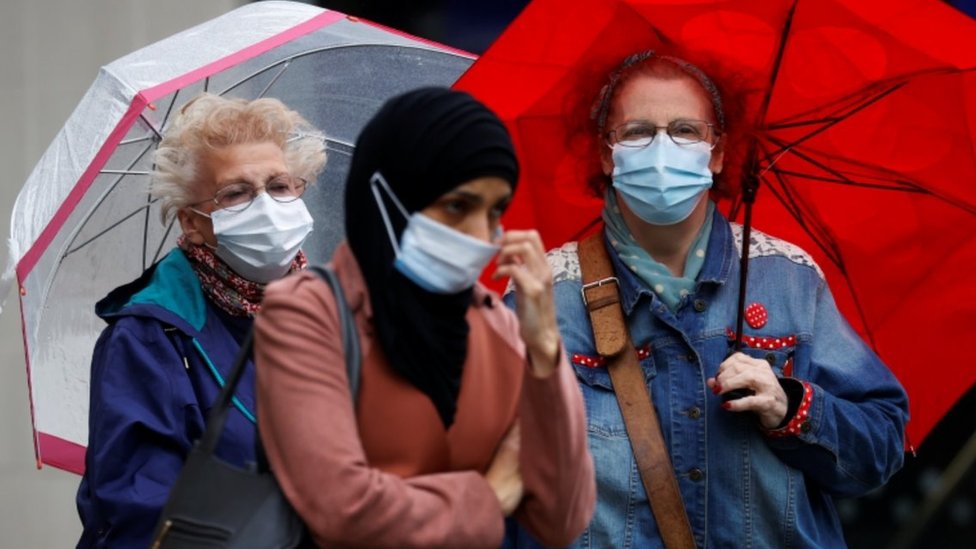 .css-14iz86j-BoldText{font-weight:bold;}Tighter restrictions will come into force in Lancashire, Merseyside, parts of the Midlands and West Yorkshire after significant increases in Covid-19 cases, the government has said.

The new rules ban separate households from meeting each other at home or in private gardens.

Pubs and restaurants must also shut early in parts of Lancashire and Merseyside.

The measures will come into force from Tuesday.

On Friday, the UK recorded a further 4,322 confirmed cases of coronavirus – the first time the daily total of positive tests has exceeded 4,000 since 8 May.

Another 27 deaths were also reported within 28 days of a positive test.

He said he did not “want to go into bigger lockdown measures” but tighter social distancing restrictions might be necessary.

Which areas do the rules cover?

Nearly 4.7 million people will be affected by the new rules.

The measures to curb the spread of the virus have been introduced across parts of the North West, Midlands and West Yorkshire.

This includes Lancashire (excluding Blackpool), Merseyside and the Cheshire boroughs of Warrington and Halton.

New restrictions are also being put in place in Wolverhampton, Oadby and Wigston in Leicestershire, and all parts of Bradford, Kirklees and Calderdale.

Some areas of West Yorkshire had already been subject to restrictions implemented at the start of August but they were eased. They are now subject to these new rules.

What are the new rules?

Residents are not allowed to socialise in their homes or private gardens in:

Residents are asked only to use public transport for “essential purposes” in:

Residents are asked to avoid attending amateur or semi-professional sports events as spectators:

Support bubbles will not be affected by the new rules.

Why have the new restrictions been introduced?

We have been used to seeing Blackburn with Darwen towards the top of the list of areas with high rates of new coronavirus infections for some time, along with other parts of east Lancashire.

Now the rules affect the whole county apart from Blackpool.

Based on the latest data published by the government on Friday for the week to 15 September, Blackpool, with 48 cases per 100,000 people, has fewer new infections than some parts of the county but is still above places like Lancaster and Ribble Valley, which are at 23 and 30 per 100,000.

Wolverhampton’s appearance in the lockdown list comes after neighbouring Sandwell, itself a neighbour of Birmingham, saw households told to stop meeting.

How have people reacted?

Jessica Burns, 30, from Lancaster, said the rules were “confusing and unclear”.

“I haven’t hugged my mum, dad, sisters or grandparents since March,” she said.

“I work in Barrow-in-Furness which has a higher rate but that is not under and regulations either.

“The inconsistencies are what make people not take it as seriously as they should.”

The mayor of Liverpool City Region, Steve Rotheram, said these restrictions would be “difficult for us all” but “we must do everything we can to curb rising infection rates and protect our families”.

In Warrington, council leader Russ Bowden urged people not to have “one more big night out” before the new measures were introduced on Tuesday.

In Pendle, officials have asked the government to relax Covid-19 restrictions after they “kept a lid” on rising numbers of cases.

Council leader Mohammed Iqbal said he was “disappointed to find local people are continuing to have to follow tighter measures here because more people are testing positive in other areas”.

He said Kirklees’ Outbreak Control Board had also written to the government to ask them to “reconsider this decision”.

The leader of Wolverhampton council Ian Brookfield welcomed the area’s new restrictions, saying: “We need to break this cycle.”

What restrictions are already in place?

Most parts of Greater Manchester – with the exception of Stockport and Wigan – as well as Preston, Blackburn with Darwen and Pendle in Lancashire are already subject to stricter restrictions .
Bolton, which has the highest number of cases in the country, also brought in extra measures on 8 September, restricting restaurants, cafes, bars and pubs to takeaway only, and requiring all hospitality venues to close at 22:00.
People in Oldham, Blackburn with Darwen and Pendle in Lancashire should also not meet anyone from outside their household outdoors.

The government said these tightened restrictions in parts of Greater Manchester and Lancashire would continue.

Restrictions were also brought in overnight across large parts of north-east England, affecting almost two million people.
A request by Leeds City Council for a curfew on pubs and bars was rejected.
The government introduced the rule of six across England on Monday.

What are the other key developments?

How have you been affected by the restrictions so far? What concerns do you have about the new rules?