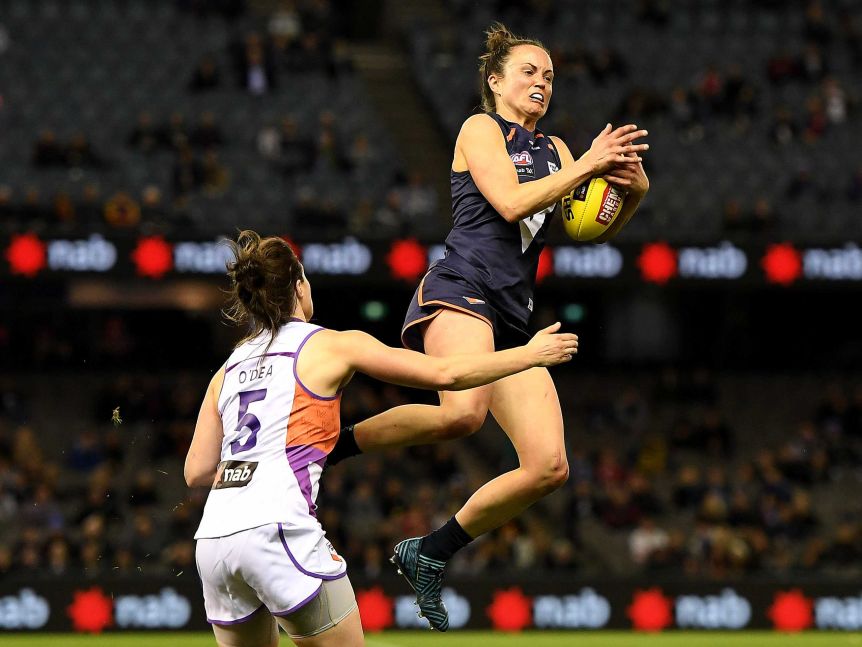 AFLW pioneer Daisy Pearce says she faced strong discouragement when she wanted to play Australian rules football as a young girl, revealing she was even subjected to a “weird” theory she would contract breast cancer if she pursued her passion.

Pearce is among the highest-profile players in the AFLW and has been prominent in the growth of the women’s game in recent years, however it has not been an easy road for the Melbourne star.

Her early years were spent growing up in the Victorian country town of Wandiligong, near Bright in the state’s north-east, at a time when many people subscribed to the belief “girls don’t play footy”.

Pearce said it was her sheer determination and the encouragement of her family, in particular from her father Daryl, that kept her in the sport.

But there were outside voices that did their best to dissuade her father — a junior Australian rules coach in Bright — from letting her play the game she loved.

“You would get the odd [question] … ‘Oh, what are you doing letting your daughter play?’,” Pearce told ABC Grandstand’s The Phil Davis Podcast.

“This is 25 years ago now, so there were people who threw up weird theories like I was going to get breast cancer and all these random things, which just aren’t the case.

“You would hear all sorts of things and any time there was any resistance or chat about why I shouldn’t be playing, Dad would kind of dig the heels in harder and encourage me even more.

“I’m thankful for that part of his personality.”

Pearce came through the Vickick (now Auskick) program and was forced to play in boys’ teams as a child, even training with an under 13 side coached by her father when she was eight.

At one stage she needed dispensation from the local league to continue playing in the boys’ competition in her early teens.

Pearce admitted to sometimes feeling “different to all the other girls” she grew up with because she wanted to play Australian rules.

But she never hid from her desire for the game.

“It’s more in hindsight I remember little funny things that used to make me feel uncomfortable, but at the time I think I was just so blinded by wanting to play it because I loved it,” Pearce said.

“I don’t think I ever questioned playing because of those things. I think, in a way, I was lucky that I was never playing it with an ambition of playing it at a higher level.

“I was just playing because I enjoyed the game and enjoyed the camaraderie of playing a team sport.”

‘Footy is just as important to girls’

A “higher level” of women’s Australian rules eventually came into being when the AFLW commenced in 2017, largely on the back of the pioneering work carried out in the already established state leagues.

Pearce said the formation of the AFLW had been a “game changer” because it made people realise footy was “just as important to girls as it is to boys”.

“The mindset change of ‘I’m just playing because I love footy’ to ‘I want to play at the highest level and I’m going to do everything I can to get there’ is just going to change what the game looks like and it’s going to change it pretty quickly,” Pearce said.

Amid this period of change, the pathways for young girls to continue playing Australian rules beyond the junior age groups have been reshaped dramatically.

The landscape is vastly different to when Pearce first played for Darebin as a teenager in the former Victorian state league, the VWFL.

Pearce, who turns 32 later this month, conceded the improvement in pathways made her envious of the younger players beginning their AFLW careers.

But she feels a significant amount of pride at the same time.

“I get little snippets of bitterness sneak in [where I’m] thinking ‘I wish I had 10 years in this environment’,” Pearce said.

“But then I think I’m pretty content that I’ve gotten to see both versions [of the women’s game] because it’s been pretty unique to be able to see footy not so long ago … it’s changed so quickly, so to have been a part of both versions is pretty special and unique.

“I’ll take that over another 10 years in the game.”

The growing professionalism of women’s Australian rules football has changed the lives of its players, with greater media scrutiny among the pressures they now face.

Social media trolling has also reared its head and Pearce has been a target while wearing the two hats of being an AFLW footballer and an AFL commentator.

Pearce said she refused to listen to “someone just sitting there throwing feedback or criticism” from behind a computer screen.

Being a mother (she missed the 2019 season after giving birth to twins) and working the occasional shift as a midwife has given her “good perspective” when dealing with trolling.

The motivation behind Pearce’s work in AFL commentary is the same that drives her as a footballer — to inspire “some little girl sitting at home watching the footy on the weekend”.

“[When] she looks up and sees me and thinks ‘I can be a commentator and I can do it better than Daisy’, if there is someone out there thinking that, well then I think I’m doing my job,” she said.

You can listen to The Phil Davis Podcast, where each week the inaugural GWS Giants captain talks to some of the most interesting people in Australian sport.