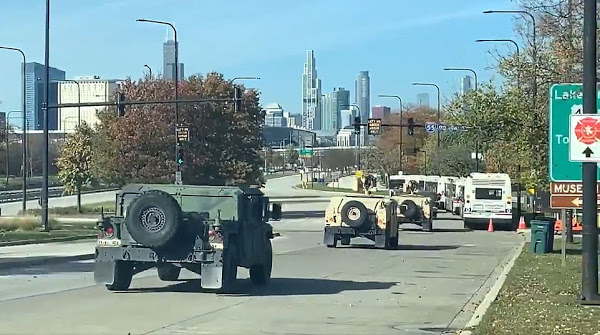 CHICAGO: Armored tanks arrive in downtown Chicago on Monday after Gov. JB Pritzker mobilized the National Guard ahead of anticipated unrest
* Illinois Gov. JB Pritzker has mobilized the National Guard in Chicago to be on standby for any unrest
* He urged residents to be ‘patient’ with the election result, which may not come until Thursday
* In Philadelphia, armed troops manned a Target on Monday night and are also settling in for the next few days
* The city has seen uproar for more than a week since the police shooting of Walter Wallace Jr.
* Texas has also planned to mobilize the National Guard in cities if there is unrest and businesses are boarding up their windows in anticipation of violence
National Guard troops are patrolling the streets of Philadelphia and Chicago, including Target parking lots, ahead of Tuesday’s election that is expected to trigger violence in major cities across the country.
Troops reported to Philadelphia on Monday night, arriving in armored trucks, a day before Americans went to the polls to decide on who will be the next President.
It comes after weeks of unrest in Philadelphia over the police shooting of black man Walter Wallace Jr. Illinois Governor J. B. Pritzker asked National Guard troops in his state to go to Chicago in anticipation of riots and looting.
WNU Editor: Prepare for the worse. Hope for the best.