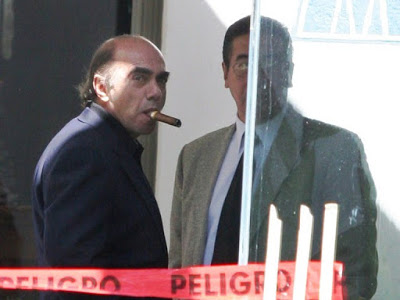 Cacho claims this is fake news and a lie, that it was she who found Kamel Nacif Borge over a year ago…see her tweet of yesterday below

FGR began proceedings before the Government of Lebanon to extradite Kamel Nacif Borge, who is still on the run for alleged torture of journalist Lydia Cacho.
Kamel Nacif Borge is a businessman who has been arrested for his participation in the torture which he committed against the journalist Lydia Cacho.
Nacif’s complaint, which at the time led to Cacho’s arrest, stemmed from the publication of the book “Los Demonios del Edén”, where the journalist mentioned that the textile company owner attended pedophile parties organized by pedo Jean Succar Kuri, who was arrested for sexual abuse against minors.
The complaint which led to the arrest of Cacho derived from the publication of the book The Demons of Eden, the journalist who mentioned that Nacif Borge, the businessman, went to parties organized by the pederast Jean Succar Kuri, who was arrested for sexual abuse against minors.
The Office of the Attorney General of the Republic (FGR) initiated extradition before the Government of Lebanon of Kamel Nacif Borge, “The King of denim”, a fugitive from Mexican justice for the alleged torture of the journalist Lydia Cacho.
On April 11, 2019, the First Unitary Court of Quintana Roo ordered his arrest for the crime of torture against Cacho.
The arrest warrant was also issued against the former Governor of Puebla, Mario Marín; as well as against Hugo Adolfo Karam Beltrán, former head of the Judicial Police of the same State, and Juan Sánchez Moreno, its director of Judicial Orders.
Torture and arrest of Lydia Cacho 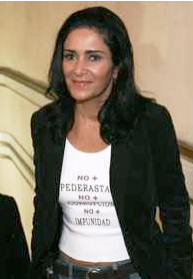 On December 16, 2005, Lydia Cacho was arrested. The crimes for which she was accused were defamation and slander, this after the publication of his book “Los Demonios del Edén”, in which he denounced the existence of a pedophilia network led by businessman Jean Succar Kuri, where Nacif Borge’s name also came out as attending pedo-parties organized by Succar Kuri.
They “arrested” Lydia Cacho in the state of Quintana Roo and took her to Puebla by land. On the way, the journalist said that she was tortured by the officers, who threatened to sexually abuse her.
In her testimony, the journalist mentioned that when they arrived in Puebla, the processing of her proposal was slow and tortuous.
They locked her in an “filthy dungeon” and took nude photos of her next to a room full of judicial police with a transparent screen in between. 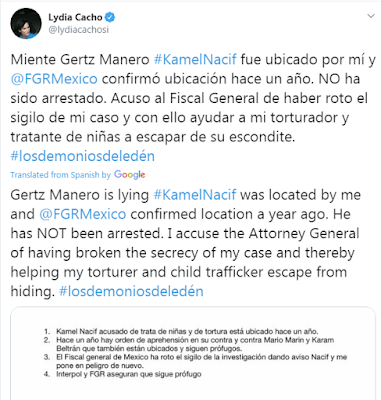 The release
On December 17 he was released at 3:00 p.m., after paying a deposit of 70,000 pesos in cash.
“What was orchestrated was an artificial arrest warrant to have the opportunity  of inflicting the greatest possible punishment on me; a kind of vendetta for having dared to speak truthfully of the powerful. The transfer, the disproportionate deployment of police resources, the physical and psychological torture and the typical sabadazo that they tried to apply to me were part of a machination that can only be explained by the ‘purchase’ of justice by an individual” said the writer about her experience. 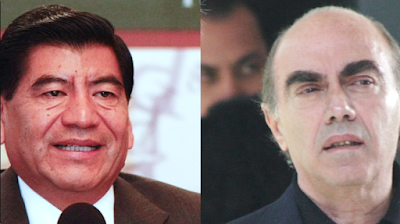 Recorded: demeaning calls of revenge and chauvinism
On February 14, 2006, a series of telephone tapes were released between Kamel Nacif and Mario Marín, which confirmed the collusion between the two in the arrest of Lydia Cacho.
The newspaper La Jornada released the recordings in which the former governor and Nacif are exhibited talking about his revenge against the journalist.
Recorded calls
The complaint which led to the arrest of Cacho derived from the publication of the book The Demons of Eden, the journalist who mentioned that Nacif Borge, the businessman, went to parties organized by the pederast Jean Succar Kuri, who was arrested for sexual abuse against minors.
Tuesday 14 of February of 2006, the newspaper La Jornada released recordings of telephone calls from the industrial maquilador Kamel Nacif with a dozen characters. One of them, the Puebla governor Mario Marín, with whom he talks about the arrest of Cacho. The ” precious Gober” [governor] remains at large.
-Quiúbole, Kamel. [what’s up?]
-My precious Gober.  [governor]
-My fucking hero!.
-No, you are the hero of this movie papa.
-Well, yesterday I finished giving this fucking old bitch a hard hit. I told her that here in Puebla the law is respected and there is no impunity and whoever commits a crime.  I already sent her a message to see how she answers us. But she has been fucking us, so take his situation and let her and others learn.
-I know, and these bastards keep getting blowjobs and blowjobs. But I made a statement. I went to tv.
-Ah good. Back in Mexico [city] or here in Puebla?
-Here, but they said they were going to send her there. She came out here.
– How gross is this, huh?
-No, they feel like God in power
– I spoke to you to thank you. I know I got you into trouble but …
-No’mbre, I like those themes. I agree with you that, hijos de la chingada, in those subjects … I mean … we are not saints, of course, but if someone has proof to present it, then do so or shut the fuck up.
-Hey, but in something so shameful, my distinguished one. It is embarrassing.
-So it is.
-And to thank you I have here a beautiful bottle of cognac that I don’t know where to send it.
– Casa Puebla.
-I wanted to give it to you personally, but I know you are busy.
– Send it to Casa Aguayo, to send it to me.
-Are you going to fuck her?
-Then I’m going to send you two, not one
14 years later an apology from the federal government
In response to the controversy, the Puebla governor went on national television, saying that the voice in the taped conversations were not his, adding that though he knew Kamel Nacif, he considered him a persona non grata. He later confessed that it was his voice and that he had held these conversations with Nacif, but claimed the recordings were used out of context.
On March 13, 2006, Lydia Cacho sued Mario Marín in a federal court for bribery, influence trafficking, conspiracy to rape and the abuse of authority.
On January 25, 2007, the justices of the Supreme Court voted unanimously to look into the unusual circumstances surrounding Cacho’s arrest by Puebla law enforcement officials in December 2005.
Years later, in December 2014, the former commander of the Ministerial Police in Puebla, José Montaño Quiroz, was arrested for acts of torture committed against the journalist; He was sentenced to 5 years in prison in 2017.
In December 2018, ministerial agent Alejandro Rocha was arrested, also for acts of torture.
On January 10, 2019, the federal government issued a public apology to the journalist after the United Nations Human Rights Committee found that her detention was punitive and arbitrary.
In that ruling, it was also determined that the State should prosecute, prosecute, and punish those responsible. This resolution was the result of a request made by the organization defending the freedom of expression Article 19.
Finally, on March 11, magistrate María Elena Suárez, head of the First Unitary Court of the state of Quintana Roo issued the arrest warrant against Mario Marín and Kamel Nacif.