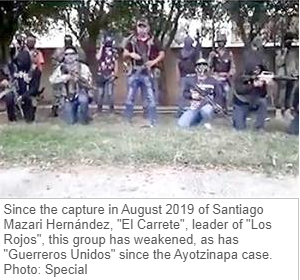 Through a video broadcast on social networks, an armed group that claimed to be part of the La Familia Michoacana cartel announced its arrival in Morelos.
Surrounded by subjects with long weapons, a man who called himself commander “Calimán” challenged “Los Rojos” and “El Señorón”.
“I come to clean the garbage that is no longer useful, all those who are left there from ‘Los Rojos’, so that they know, they are going to die, I have already killed several, I have not left a message, but so that they now know” , said.
“I am ‘Calimán’, from La Familia Michoacana, the entire south of the State of Morelos is mine, you ‘Señorón’,  I am already here within Morelos.”
Since the capture in August 2019 of Santiago Mazari Hernández, “El Carrete”, leader of “Los Rojos”, this group has weakened, as has “Guerreros Unidos” since the Ayotzinapa case.
In this context, “El Señorón”, “El Frank” or “XL” emerged, identified by security agencies as Francisco Javier Rodríguez Hernández, leader of a group that they locally name as “Los Colombianos”, for now in alliance with the Cartel Jalisco New Generation.
Mantas  signed by “El Señorón” have appeared in different municipalities of Morelos along with dismembered bodies, and in this time of  Covid-19 armed individuals distributed pantries in  his name.
“I have been following the orders of my employer ‘Don Pescado’ and ‘Don Fresa’, I do not come to rob people,” added “Calimán” in the video.
“What is the Sedena, the Navy, the other corporations, I do not want problems with you, I only come to do my job, to clean up all the garbage that is here.”
Until last year, security reports ranked La Familia Michoacana as one of the criminal groups that disputed drug trafficking in Morelos, but this year its presence had decreased.
This could mean that the criminal structure of drug trafficking in Morelos is divided into four large groups that fight the plaza.
The Colombian Cartel led by “El Señoron”; the cells at the service of the “Lord de los caballos”  led by “EL Carrete”; The group of La Mera V (LIios, Mayas, Crispín and Señor de la V); and now recently La Familia Michoacana led by “Commander Kaliman” who could make an alliance with Mera V in their quest to control the State.