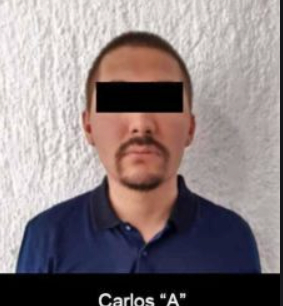 Carlos Almada Castrillo, of
Cártel Jalisco Nueva Generación could have been a key witness for U.S. prosecutors as they work to topple the
global drug empire.  (allegedly, El Chicken worked
directly for El Sapo or 090 top lieutenant of Mencho)

But he was found hanging in a
Mexican jail.

Investigators and experts
tracking drug cartel developments say the 27-year-old’s death is likely a
murder disguised as a suicide to prevent him from testifying in the U.S., both
a senior official with the U.S. Drug Enforcement Administration and a Mexican
political analyst told the Courier Journal.

Almada, known as “El
Pollo” or “El Chicken” for his small neck and larger head, is
one of high-ranking members of CJNG — a top U.S. target — to die under
suspicious circumstances before officials could secure their extraditions to
the U.S.

That’s three dead witnesses,
which illustrate the difficulty in bringing down CJNG, which along with the
infamous Sinaloa Cartel, export the bulk of illegal drugs to the U.S. —
including a synthetic opioid that is now America’s No. 1 killer, fentanyl.
Underscoring the urgency to weaken the cartels, U.S. health officials expect
overdose deaths to top 70,000 amid the deadliest drug epidemic in American
history.

Last fall, federal police and
members of the SEDENA, Mexico’s national defense, teamed to arrest Almada and
three alleged accomplices on September 26, 2019 in Zapopan, a city in the
Mexican state of Jalisco, headquarters for CJNG.

At the time of Almada’s arrest,
the country’s National Defense Ministry issued a public statement detailing
their seizure of a cache of weapons, including 22 assault rifles and 2,600
cartridges as well as grenades and grenade launchers capable of downing
aircraft. They tagged Almada as the head of CJNG’s operations in the
metropolitan region of Guadalajara and reported finding several packages of
cocaine, methamphetamine and tactical gear.

A senior DEA official, who spoke
only on background because Almada’s death is being investigated by Mexican law
enforcement — not U.S. officials — said some of the cache of seized weapons,
including military-grade assault rifles,were traced back to U.S. The bulk of
illicit drugs fueling America’s deadliest drug crisis is coming from Mexico,
but Mexican leaders say cartels are largely armed with American weapons due to
lax U.S. gun laws.

Experts said it’s likely Almada
would have known a lot of cartel secrets. That’s because he grew up with the
cartel leader’s son, Rubén Oseguera González, known as “Menchito”
or  “Lil’ Mencho” and remained
part of his inner circle, according to a retired DEA supervisor who once participated
in the hunt for El Mencho. Menchito stood to inherit control of the cartel but
was arrested in Mexico in 2017.

Five months after Almada’s
arrest, Menchito was extradited to the U.S. despite three years of court
battles to keep him in Mexico. Menchito’s attorney in Mexico, Victor Francisco
Beltrán García, told The Courier Journal that Menchito’s extradition was abrupt
and illegal and banned by a Mexican judge.

However, Alfonso Durazo, Mexico’s
security minister, told reporters the extradition had been in the works for
eight months.

Eager to bring Almada to
Washington, D.C., to garner information against Menchito, U.S. officials
obtained a provisional arrest warrant, which labeled Almada a flight risk and
asked Mexican authorities to detain him while both countries worked to secure his
extradition.

But Almada’s body was found at 11
a.m. March 5 in his small jail cell next to a toilet in Puente Grande federal
prison in the state of Jalisco. He died of mechanical asphyxia by hanging,
according to a copy of the death certificate. But it didn’t specify if the
death was suicide or homicide.