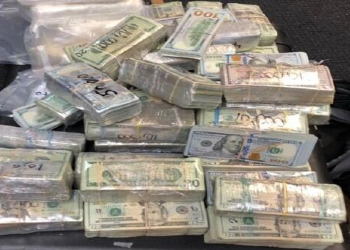 Dirty cash from the illicit drug trade is piling up in major US cities as the coronavirus hobbles yet another fundamental component of the operations of Latin America’s criminal organizations: international money laundering schemes.

Throughout three weeks in April, federal authorities in Los Angeles seized more than $3 million in three separate seizures of suspected drug proceeds as the coronavirus slows down trade-based money laundering schemes normally used to move such funds, according to a Los Angeles Times report.

The seizures are the clearest manifestation yet of how the virus has impacted certain money laundering systems that organized crime groups rely on to clean up their illicit proceeds.

Seizures of this nature were more common in years past when Mexico’s criminal groups relied primarily on bulk cash smuggling to repatriate their profits from the United States. However, these groups have since shifted to more sophisticated money laundering tactics like the “black market peso exchange.”

To convert dollars into Mexican pesos, a broker will purchase drug traffickers’ dollars with pesos. The cash is then delivered to exporters that ship goods like clothing and other things to retailers in Mexico, who sell the goods and pay the broker back in pesos, according to a federal prosecutor who spoke with the Los Angeles Times.

But with many nonessential businesses closed across the country, these elaborate schemes have been halted, leaving drug proceeds with nowhere to go and authorities with a better chance of seizing them.

Although difficult to approximate, a 2015 money laundering threat assessment from the US Treasury Department estimated that some $300 billon is laundered through the US financial system annually. It’s not yet clear how the current disruptions will impact this flow.

From disturbing the global supply chain for drug trafficking to impacting crime rates and the effectiveness of already struggling judicial systems across Latin America, international money laundering operations are just the latest pillar of organized crime to be disrupted by the coronavirus pandemic.

However, Latin America’s criminal groups don’t just rely on the US system to launder illicit proceeds. Across the region, a number of countries have at one point been blacklisted and identified as major money laundering hubs, including Panama, Colombia, Brazil and Paraguay, among others.

SEE ALSO: How to Measure Coronavirus’ Criminal Impact in the Americas? Wait.

In March 2020, for example, Panama was listed among the countries with the highest financial secrecy in the world and the most secretive in Latin America, according to the Tax Justice Network’s Financial Secrecy Index for 2020. This secrecy has long helped dirty money flow into the legal system and hide the wealth of corrupt actors.

Illicit money is also moved through contraband smuggling — one of the region’s top money laundering tools — and “dólar-cabo” systems, or currency exchanges. Contraband markets in places like Argentina, which have been exploited in the past to launder money due to corruption and lax oversight, are currently growing in some parts of the country amid the coronavirus’ disruption of other criminal economies like drug trafficking.

Mexico’s organized crime groups might be scrambling as the coronavirus disrupts their use of the US financial system to launder money. But Latin America’s thriving contraband market — which moves billions annually — hasn’t been brought to a halt just yet, and will likely help keep the money laundering operations of other criminal actors in the region afloat for now.