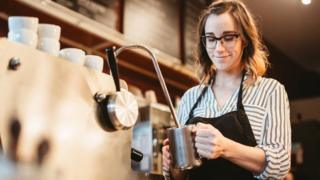 The number of people claiming unemployment benefit in the UK soared to 2.1 million in April, the first full month of the coronavirus lockdown.

The total jumped by 856,500, the Office for National Statistics (ONS) said.

Before the lockdown began, employment had hit a record high.

The government has made some changes to who can claim work-related benefits during the pandemic, but this figure is one of a series that show the stress Covid-19 is putting on the jobs market.

In another indication of the bleak employment landscape, the number of job vacancies fell by nearly a quarter to 637,000 in the three months to April.

Meanwhile, claims for universal credit – the benefit for working-age people in the UK – hit a record monthly level in the early weeks of lockdown.

But the labour market is set to worsen, according to politicians and analysts, with Therese Coffey, Secretary of State for Work and Pensions, telling the BBC on Tuesday that the unemployment rate was likely “to increase significantly”.

According to separate research by the Resolution Foundation, young people are most likely to have lost work or seen their income drop because of the coronavirus pandemic.

More than one in three 18 to 24-year-olds is earning less than before the outbreak, the research indicated.

It said younger workers risk their pay being affected for years, while older staff may end up involuntarily retired.

Separate ONS figures showed UK unemployment rose by 50,000 to 1.35 million in the three months to March.

The unemployment rate was estimated at 3.9%, slightly down on the previous quarter, the ONS said.

The jobless figures only cover the first week of the lockdown and they are expected to worsen sharply in the coming months.

Jagjit Chadha, director of the National Institute of Economic and Social Research, told the BBC: “We can reasonably expect unemployment to rise very quickly to something over 10% – something we haven’t seen since the early 1990s.”

Tej Parikh, chief economist at the Institute of Directors, said: “Even before lockdown, coronavirus was threatening to take the shine off the UK’s sterling jobs record, and initial estimates for April don’t make for easy reading.

“It’s clear that, without the government’s furlough scheme, the picture would have rapidly deteriorated even further.”

‘The week after I left the company, Covid hit’

Unemployed HR worker Jon Ellis-Fleming, of Keighley in West Yorkshire, had been with an outsourcing company for more than four years when he was made redundant.

He left the firm on 8 March, hoping to spend some time at home with his partner Julia Paterson and their eight-month-old daughter Daisy while looking for a new job.

“The week after I officially left the company, Covid hit,” he told the BBC. That meant that several promising job offers just evaporated as firms put their recruitment plans on hold.

Jon applied for universal credit and jobseeker’s allowance. He is due to receive his first payment of £600 later this month, while his partner receives £650 a month on maternity leave.

That leaves them with less than half of their former income – and with another mouth to feed as well.

“I’ve not been out of work in 10 years,” he said. “I’ve never had any intention of being out of work that long.

“I can’t help but wonder, if I’d been with the company two weeks longer, would furloughing have been an option?”

People who are at home on furlough are not counted in the jobless total.

However, the total number of weekly hours worked showed its largest annual decrease in 10 years.

The government’s jobs schemes succeeded in keeping the headline jobs numbers high, and jobless data still quite low up until the end of March.

But there is evidence of the pandemic crisis impact starting to hit in the latest ONS jobs market release.

The number of job vacancies from February to April tumbled by 170,000 to 637,000 – a record quarterly fall. The claimant count jumped in April, while the average hours worked in a week fell sharply at the end of March.

So the signs of a significant downturn in the normal jobs market are there, but as is the impact of the extraordinary government support package. Unemployment would have shot through the roof without this support.

However, these numbers will get worse with next month’s figures. The vacancy drop shows there are fewer jobs out there for those who do lose work. And there are real concerns as to what happens when the support starts to be phased away in August.

Estimates based on returns for individual weeks suggest that this fall was mostly caused by the decrease in hours in the last week of March, with a much smaller decrease in the previous week, the ONS said.

In the final week of March, the total number of hours worked was about 25% fewer than in other weeks within the quarter.

“The headline employment and unemployment data have registered no impact from Covid-19 because they are three-month averages and the UK only went into lockdown in late March,” said Samuel Tombs, chief UK economist at Pantheon Macroeconomics.

“Weekly data on total hours worked, however, show some of the initial virus damage; hours dropped by 6% in the penultimate week of March and by a further 16% in the final week.

Ms Coffey told the BBC’s Today programme that because of the pandemic, many people were coming to the benefits system for the first time. Claiming for unemployment benefit was “an important part of the welfare system”, she said.

She said the virus had caused an “unprecedented emergency”, adding: “I think we should be prepared for the unemployment rate to increase significantly.”

Shadow work and pensions secretary Jonathan Reynolds said the figures showed “the severity of the crisis we are facing”. He added: “Unfortunately, these claimants will now discover the UK has one of the weakest out-of-work safety nets in the developed world.

“We support the changes the government has made so far during the outbreak, but they do not match the scale of the crisis.”

Are you claiming unemployment benefit? Share your experiences by emailing haveyoursay@bbc.co.uk.