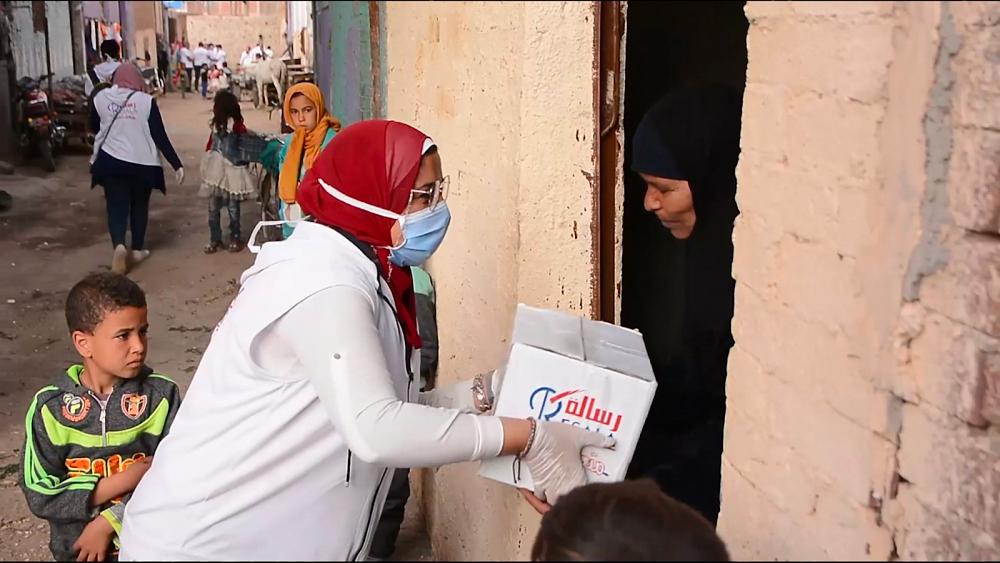 Communities across the Middle East and North Africa are exploring ways to counter the impact of the COVID-19 pandemic together, through social solidarity.

Making a positive move in Egypt, is footballer Saad Samir.

In March, in addition to stay-at-home orders from the government, many Egyptians faced storms and floods. As a result, many people lost their homes.

Samir pledged to provide food and shelter for those affected.

With that, he kicked off ‘Tahady Al Kheir’, or the Goodness Challenge, on social media.

The campaign soon saw more than 50 footballers, and a variety of celebrities, follow suit to help raise nearly $450,000.

Translating these pledges into action is the Resala Charity Organization.

To date, the non-profit group has delivered around eight million food packages.

“It was the biggest movement in Egypt,” says Riham Meheisen, Resala Charity Foundation’s spokesperson. “To have celebrities and football players get involved together.. in such a great initiative to help those who are especially in need.”

Candle of Hope is a campaign founded on the belief that not all giving has to be financial to change lives.

The pan-Arab initiative urges people to spread hope and positivity by lighting a digital candle via an App.

Whilst the App does generate money through advertising, its founder Chaker Khazaal, says that individual acts of kindness are driving the initiative.

Khazaal, who is an author and social media influencer, says that by thinking outside of the box, individuals can support their communities in a variety of ways, not only financially.

One example he cites, is providing free advertising for local businesses on Instagram and other social media.

“That’s an act of kindness, so let’s be creative,” he says. “Let’s be innovative, let’s rethink community involvement.”

Tens of thousands of people across the region are lighting candles in solidarity for those affected by the COVID-19 pandemic.

Amongst them is Pink Floyd musician and songwriter Roger Waters, plus Lebanese singer and actress Haifa Wehbe, who recently lit her candle via a billboard in New York’s Times Square.

Egyptian actress Nelly Karim was another participant, and she told Euronews that she believed the promotion of kind acts would attract yet more kind acts.

“If there were a million [people] that were made aware, good!” she says. “Specifically, these acts of good that start with something small. [They] grow and grow. That’s the best thing about it.”

Maya from Lebanon animated her neighbors in this creative tribute to them.