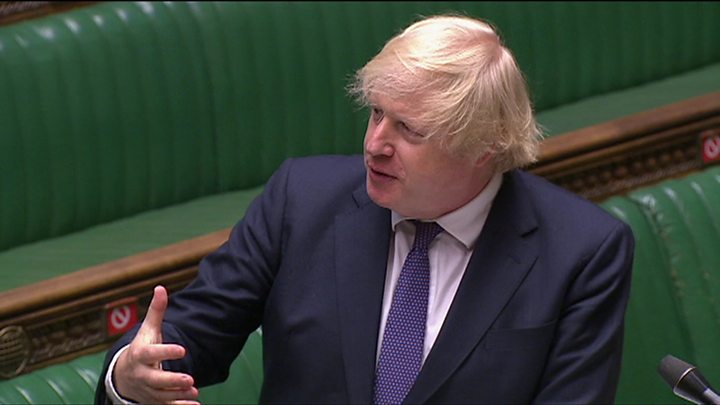 Up to three million Hong Kong residents are to be offered the chance to settle in the UK and ultimately apply for citizenship, Boris Johnson has said.

The PM said Hong Kong’s freedoms were being violated by a new security law and those affected would be offered a “route” out of the former UK colony.

About 350,000 UK passport holders, and 2.6 million others eligible, will be able to come to the UK for five years.

And after a further year, they will be able to apply for citizenship.

British National Overseas Passport holders in Hong Kong were granted special status in the 1980s but currently have restricted rights and are only entitled to visa-free access to the UK for six months.

Under the government’s plans, all British Overseas Nationals and their dependants will be given right to remain in the UK, including the right to work and study, for five years. At this point, they will be able to apply for settled status, and after a further year, seek citizenship.

The PM said Tuesday’s passing of a new security law by the Hong Kong authorities was a “clear and serious breach” of the 1985 Sino-British joint declaration – a legally binding agreement which set out how certain freedoms would be protected for the 50 years after China assumed sovereignty in 1997.

“It violates Hong Kong’s high degree of autonomy and threatens the freedoms and rights protected by the joint declaration,” he said.

“We made clear that if China continued down this path we would introduce a new route for those with British National (Overseas) status to enter the UK, granting them limited leave to remain with the ability to live and work in the UK and thereafter to apply for citizenship. And that is precisely what we will do now.”

The UK government has been raising concerns about the national security law and very publicly trying to pressure Beijing into a change heart.

That has clearly failed – so ministers are now fulfilling their promise to allow some three million British Overseas Nationals to come to the UK. This is a significant move and the government wants to send a strong message.

But there will be more pressure now to rethink other elements of our relationship with China – not least the deal to allow Huawei to build parts of the UK’s 5G structures.

Many Tory MPs have been lobbying against that for some time – and this will only add to their concern.

Updating MPs on the details, Foreign Secretary Dominic Raab said there would be no limit on numbers or quotas and the application process would be simple.

“This is a special, bespoke, set of arrangements developed for the unique circumstances we face and in light of our historic commitment to the people of Hong Kong,” he said.

Downing Street said further details of the scheme will be detailed “in due course”.

In the meantime, British National Overseas Passport holders in Hong Kong will be able to travel to the UK immediately, subject to standard immigration checks, the prime minister’s official spokesman said.

They will also will not face salary thresholds to gain their visas, he added.

Hong Kong’s new national security law, which targets secession, subversion and terrorism with punishments up to life in prison, came into effect on Tuesday.

I was born in Hong Kong before 1997, the year when Hong Kong was handed back to Chinese rule. That means I had a British National Overseas (BNO) passport as a child.

When the news broke that BNO passport holders were eligible for British citizenship after living and working in the UK for five years, and after spending another year of being granted settled status, many of my friends were excited. They say at least there’s a way out for Hong Kongers after the national security law came into force.

But many questions remain. Currently there are 350,000 BNO passport holders, but about three million Hong Kong residents are eligible for BNO passports – and that doesn’t appear to include dependants born after 1997.

Will the UK be ready to take in so many Hong Kong residents? Will there be enough jobs? Will BNO passport holders have recourse to public funds? And will they be covered by the NHS?

Some also say it’s good that there’s a lifeboat, but do they really want to leave their home?

Several people have already been arrested under the new powers, including a man carrying a pro-independence flag as police used pepper spray to disperse some protesters gathered to mark 23 years since British rule ended.

Critics say it effectively puts an end to the “one country, two systems” principle enshrined in the Joint Declaration. China has rejected criticism of its actions, saying they are internal matters.

The UK government has come under growing pressure to take a firm line with Beijing from MPs, who are worried about China’s increasingly assertive role regionally and the security implications of Chinese firm Huawei’s involvement in the UK’s 5G network.

Mr Raab said he wanted a positive relationship with China but Beijing had “broken its promise” to the people of Hong Kong through its “flagrant assault” on freedom of speech and right of peaceful assembly.

Labour said it welcomed the government’s action but said there must be no discrimination on those allowed into the UK on the basis of income or other factors.

Shadow foreign secretary Lisa Nandy said the UK also had a responsibility to consider the welfare of those who were not able to re-locate or who wished to stay in Hong Kong.

She urged the government to work with its international partners, through the UN, to force an inquiry into police brutality in Hong Kong and also called for the UK to re-examine its commercial relationship with China.

“For too long in relation to China we’ve had no strategy at home and no strategy abroad. I hope he can give us a commitment today that this marks the start of a very different era,” she said.

Are you a Hong Kong resident with a British National Overseas passport? Share your views, plans and experiences by emailing haveyoursay@bbc.co.uk.