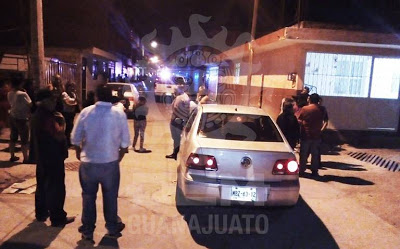 Guanajuato-  The violence this Saturday continued with the
murder of eight people with the most occurring in Salamanca.

The body of a
woman was found in a plastic bag on a soccer field in the San Francisco de Asis
neighborhood. The finding was reported at 6 p.m., witnesses said that during a
soccer game a person approached in a car and discarded a black bag. Minutes
later, a spectator realized that inside the bag was a human body.

They say she was a woman because she
had long brown hair, “said a young man. Police confirmed the report and
waited for the game to end to secure the scene, which was taken over by the
State Attorney’s Office.

In another case, also in
León, a man was shot to death near his home, in the Jol Gua Ber neighborhood.

The crime happened at 8
o’clock yesterday night on Recreación Street. According to neighbors, the
victim was going home when two men on a black motorcycle approached her.

The woman fell, and witnesses
called 911. Paramedics came to help, but she had already was dead.

A woman was shot at least
five times in the head and chest, when she was in the Loma Bonita neighborhood
at around 8:30 a.m. yesterday night. She was on Chihuahua Street when a
stranger approached and shot her.

A man was seriously injured
when he was hurt in an alleged fight that took place in the La Floresta
neighborhood. The case occurred at 5:30 in the afternoon yesterday on Río Mayo
Street, the victim is about 34 years old and on the site it was said that he
was nicknamed “The Virus.” Relatives took the serious man to a
hospital.

The violence spread to
Jerécuaro yesterday , a man was shot to death inside a business called “El
7”. It occurred at the entrance to the Rancho Nuevo community. Shortly
before 2 in the afternoon, several detonations broke the tranquility in the
community, who upon hearing them reported them to the Emergency Center. Armed
men arrived in the community, got out of a truck and entered the store to shoot
a man who was shopping, and after killing him, they fled. Immediately agents of the State Public Security Forces went to the
indicated place, and inside the store “El 7” they found the deceased
man. He had died from gunshot wounds and the agents guarded the scene and
reported what happened to the ministerial authorities.

Two cyclists were shot at on
the Salamanca-Celaya free highway, one died at the scene and the other in the
hospital. Motorists reported two people being run over on the road at around 6
p.m. yesterday. Red Cross paramedics went to the site and found that one of the
cyclists was in serious condition with head injuries. The second no longer had
vital signs and both victims were found to have gunshot wounds. Agents of the Prosecutor’s Office found at least
five shells that were struck, apparently fired by a short weapon.

No one in the area could give
any additional information about what happened or identify the murderers.

“It seems that (the
victims) are from the La Cruz neighborhood, it may be that one of them would be
Martín, but I’m not very sure,” commented one of the onlookers who came to
the scene after the crime.

In another case, inside a
streambed, outside the community of San Manuel de Valderrama, in Salamanca, the
body of a man was found. The events were reported to the police authorities
around 7 pm yesterday.

Police officers immediately
went to the reported site and found the body of a man wearing a black shirt and
blue jeans, and he was without shoes. Apparently, the victim had been in
the place where he was found for several days, so the cause of death could not
be determined, nor his age.

National Guard agents
surprised criminals who left bags with human remains in the municipality of
Juventino Rosas. After an exchange of bullets, one of the civilians died and
the agents were unharmed.

They reported that they were
on surveillance tours when they saw a BMW car stopped on the side of the road,
and next to it were several people who were leaving bags. When the elements of
the National Guard approached, they were attacked with bullets and they
responded in the same way. One of the alleged criminals was shot dead, the rest
were able to escape in the car.

Later, agents of Criminal
Investigation and Expert Services of the Prosecutor’s Office came to the site,
who processed the area and raised firearms and shell casings. The bags left by
the criminals contained human remains, but authorities did not report whether
they were from one or more people.