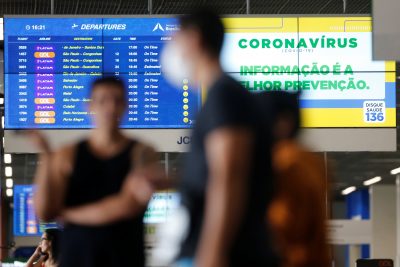 Much of the public alarm triggered by the outbreak of the novel coronavirus (COVID-19) is greatly bound up with the management of cross-border security threats. COVID-19 resembles a 21st century medieval plague in terms of how little we understand its character and how vulnerable we are to its effects.

The Director-General of the World Health Organization has openly admitted: ‘You can’t fight a virus if you don’t know where it is. That means robust surveillance to find, isolate, test and treat every case, to break the chains of transmission’. The virus is known to transmit through direct contact with respiratory droplets and residue on cool surfaces, which suggests that infection at room temperature is likely. Most standard medical advisories published by national health authorities include strong recommendations for regular handwashing, avoiding handshakes and hugs, and social distancing. Meanwhile those with suspect or confirmed cases are quarantined.

These drastic measures have spread panic and fear among the public, despite government calls for calm.

Addressing the pandemic should not be left only to medical professionals. The coronavirus crisis is emblematic of the difficulty of constructively extending good governance across borders. An effective response requires governments, medical authorities and civil society to consider a new spatialisation of threats to human security when making decisions.

Tourists, migrant workers of all skill levels and businesspeople are the daily agents of globalisation. They bring much-needed services to their host populations. Their spending delivers the most visible benefits of open borders, lifting local incomes and fuelling industrial supply chains.

But when these human agents of transnational movement carry pathogens, governments are compelled to close their borders. Whole towns restrict or deny entry to outsiders, entire ships and their passengers and crew are embargoed offshore, and even peaceful arrivals are blocked by military force. In this regard, the Chinese lockdown of Wuhan and other cities in Hubei province was necessary and commendable.

The general idea of observing the socially diseased from a central point is widely known in social science thanks to the work of Jeremy Bentham and Michel Foucault. The ‘panopticon’ is an idea that can be traced back to early modern prison surveillance architecture where prison cells are arrayed around a central towering guard post. This system was meant to instil fear in those prisoners being watched in their cells, while also ensuring that they develop self-vigilance.

The panopticon is a remarkable analogy for preventive health surveillance today. The infected are monitored 24 hours a day in quarantined locations by nurses and doctors. Bureaucrats in national health ministries report every improvement or deterioration of the sick. This compels both the sick and the uninfected to adapt to a regime of compliance with medical advice and good sanitary practices. In places as diverse as China, Israel, Singapore, South Korea and Taiwan, mobile apps have been made available to the public to report their temperature and health status on a regular basis. In Israel and Singapore, authorities are even attempting to use mobile phone records to triangulate the proximity of ordinary passers-by to possibly infected persons.

In some countries, contact-tracing is being employed to good effect, guaranteeing that every contamination suspect is isolated from acting as a point of further contagion. Everyone then starts to monitor fellow citizen’s hygiene out of internalised habit. The question of invading one’s privacy seems momentarily irrelevant.

Local, federal and supranational governments justify these practices in the name of watching the population police themselves. In this regard, there is nothing wrong with governments telling people how and how often to conduct personal ablutions for the sake of the nation’s health. China can invoke Maoist-style totalitarian campaigns, the United States can dub its response an emergency measure and the South Koreans, Spaniards, Iranians, Italians and Singaporeans can label their response a government and society action plan.

The irony is that in psychologically disinfecting an entire population under threat, the long arms and eyes of surveillance must reach into every nook and cranny of private life. An inner globalisation has to take place – but ideally under the watchful eyes of civil society. The Leviathan of Government needs to be unbound to do its job, but once done, democratic liberties will have to be observed.

Defeating a globalised biosecurity threat necessarily demands something akin to real-time intelligence sharing. For many sovereign governments, this is easier said than done. The World Health Organization ought to initiate more intensive pandemic preparedness programs for training civil servants tasked to manage health crises. It is already offering crash courses in managing COVID-19.

The global north and global south must find a common depoliticised platform to exchange relevant information about the latest viral threats in much the same way cyber security firms and national cyber agencies monitor digital viruses in real time. Both Chinese President Xi Jinping and US President Donald Trump should forge a politically-insulated channel of communication whereby their respective medical establishments can swap the latest pathogenic threat information without fear or favour. It will also burnish both governments’ claims to be providing responsible global leadership under both peacetime and crisis conditions.

Above all, global biosecurity intelligence sharing should operate beyond nationalist considerations, simply because pathogens afflict all human beings regardless of political allegiance.

It is sobering to recall that the first cross-border infections broke out across East Asia in less than a month. Three months later, 188 countries have officially declared infections amounting to more than 400,000 cases and over 17,000 deaths. This scenario panned out this way because there was no early warning through intelligence sharing across borders.

A Chong is a foreign affairs and political commentator based in Singapore.