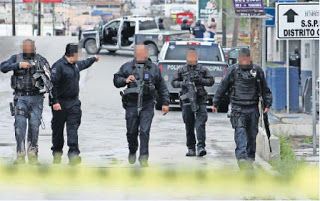 Advertise Here for only $299 mo. Unlimited cpc Adspace ID1
“MX” for Borderland Beat
Mexican authorities are under high alert after gangsters attacked policemen in several parts of Ciudad Juárez, Chihuahua, this entire week. Close to a dozen attacks were reported by security forces in multiple locations, including near their local headquarters, at a gas station, and outside a school and hospital. Two policemen and two gangsters were killed. These attacks are part of a violent saga dating back to late 2019.
Investigators stated that the attacks showed that criminal cells operating in Ciudad Juárez were weakened and trying to intimidate them. However, others suggested a crude reality: the spike in violence is driven by vengeance. In recent months, authorities have arrested multiple cartel leaders and seized their drugs and weapons, but these measures have angered gang members and driven them to attack police officers indiscriminately.
Background
In late February, gangsters began targeting police officers in Ciudad Juárez after several government-led crackdowns. Chihuahua authorities confirmed that the attacks that month were derived from the 17 February arrest of Sinaloa Cartel regional boss Jorge Luis “El Lobo” Arvizu Marquez. The arrest of El Lobo dealt a large blow to the Sinaloa Cartel in the region and angered many in his gang, including his brother Francisco “El Jaguar” Arvizu Marquez. On 21 February, six gang members were killed by police officers near Casas Grandes, Chihuahua. Authorities confirmed that the gangsters were killed after they had surrendered.
The Drug Enforcement Administration (DEA) office in El Paso, Texas, grew worried about the direct attacks against police officers. They claimed that these incidents had not been seen in Ciudad Juárez at this rate since the start of Mexico’s drug war. “The recent violence on police is certainly concerning. They are going after the authorities, the people in charge of enforcing the laws”, said Kyle W. Williamson, who heads the DEA force in El Paso.

In addition, Jesús Eduardo “El Lalo” Soto Rodríguez was a major driver of the violence in Ciudad Juárez. He was behind bars at the Center of Social Reintegration No. 3 in the city but reportedly continued to be involved with Los Mexicles. In November 2019, when authorities tried to carry an investigation inside the prision, El Lalo’s henchmen responded by carrying out homicides and burning 25 vehicles in Ciudad Juárez to distract them.

In February 2020, authorities decided to transfer him to the Federal Social Readaptation Center No. 14, a maximum-security facility in Villa Comaltitlán, Chiapas. Both prisons are on opposite sides of the country; Chiapas is approximately 2,900 km (1,801 mi) south from Ciudad Juárez. The move was done to stop El Lalo’s gang activities and help reduce crime in Ciudad Juárez. But the transfer had many unintended consequences because violence spiked shortly thereafter when his faction increased their attacks against police officers.

Chronology of this week
Ciudad Juárez lived several violent episodes this week. Starting on Tuesday afternoon, gangsters attacked a police car in Batopilas street. One officer was wounded. Later in the evening, the house of a police officer who lived in Finca Bonita neighborhood was sprayed by bullets. No one involved in the attacks was arrested.
On Wednesday, four attacks against police officers were registered in Ciudad Juárez’s southeastern region. They occurred in Fray García de San Francia neighborhood and outside a factory in Santiago Troncoso y Libramiento. Later that afternoon, authorities confirmed that a state police officer was killed in one of the shootouts.
More attacks continued that day. While policemen were in Bolivia and 16 de Septiembre streets, they were attacked by more gangsters. Another attack broke out minutes later against other police officers who were outside a hospital. They were transporting one of their officers who was to be treated from his wounds he suffered in an earlier shootout.
In the hospital shootout, another police officer and at least one suspected gangster were killed. Five more people were wounded, including a law enforcement officer and a doctor and paramedic. It was later confirmed that a National Guard (GN) member and another police officer were also wounded. As the chaos ensued, Chihuahua authorities quickly issued a red alert and ordered all law enforcement officers in the city to be exercise extreme caution.
Later that afternoon, another attack against police officers was reported in La Chaveña neighborhood. The police confirmed that gunmen attacked a patrol unit and injured one officer. When more police officers arrived at the scene, the assailants were no longer there. That evening, the GN erected several checkpoints across Ciudad Juárez to carry out vehicle inspections. This had a huge impact on traffic since many lanes were closed in major intersections.
On Thursday, Chihuahua authorities confirmed that 17 people reportedly involved in the attacks had been arrested. They also seized 21 firearms and 11 vehicles. In a press conference that day, Ciudad Juárez mayor Héctor Armando Cabada Alvídrez confirmed that the attacks were driven by revenge. He stated that gang members from Los Mexicles and La Empresa carried out the attacks after authorities seized their firearms and narcotics in previous operations.
Security commissioner Jorge Nava López told reporters that the assailants were from the Barrio Azteca gang and that they were inexperienced gunmen. “People between the ages of 17 and 22 are responsible for the attacks against the police”, he said. He explained to reporters that these gangsters start as scouts (halcones) or drug dealers and then are promoted to foot soldiers without receiving proper training.
That same day, another attack against police officers was reported near a university. By the end of the day, the total death toll had risen to four: two police officers (Alma González and Victor Valadez Martínez) and two suspected gang members killed. Most of the attacks took place within 24 hours.
Sources: Since multiple sources were used for this report, I’ve added them as links in the body paragraphs for better readability. Most of the sources are from the media outlets Diario de Juárez, El Paso Times and KTSM.
Advertise Here for only $299 mo. Unlimited cpc Adspace ID2

Matamoros, Tamaulipas: Armed Men Clash With Military In The Streets

October 18, 2021Comments Off on Matamoros, Tamaulipas: Armed Men Clash With Military In The Streets

The New Life Of Caro Quintero: A Legend Of The Narco Clinging To His Land

October 18, 2021Comments Off on The New Life Of Caro Quintero: A Legend Of The Narco Clinging To His Land

Rioters Demolish Portland, Doing $500,000 in Damage as New Bill Forces Police to Stand by and Watch

Opinion Smidgen: There’s Really Something Seriously Wrong With This Guy

Save the Scripted Praise, Joe. Colin Powell Would Not Have Left Americans Behind Enemy Lines

Matamoros, Tamaulipas: Armed Men Clash With Military In The Streets

October 18, 2021Comments Off on Matamoros, Tamaulipas: Armed Men Clash With Military In The Streets

The New Life Of Caro Quintero: A Legend Of The Narco Clinging To His Land

October 18, 2021Comments Off on The New Life Of Caro Quintero: A Legend Of The Narco Clinging To His Land