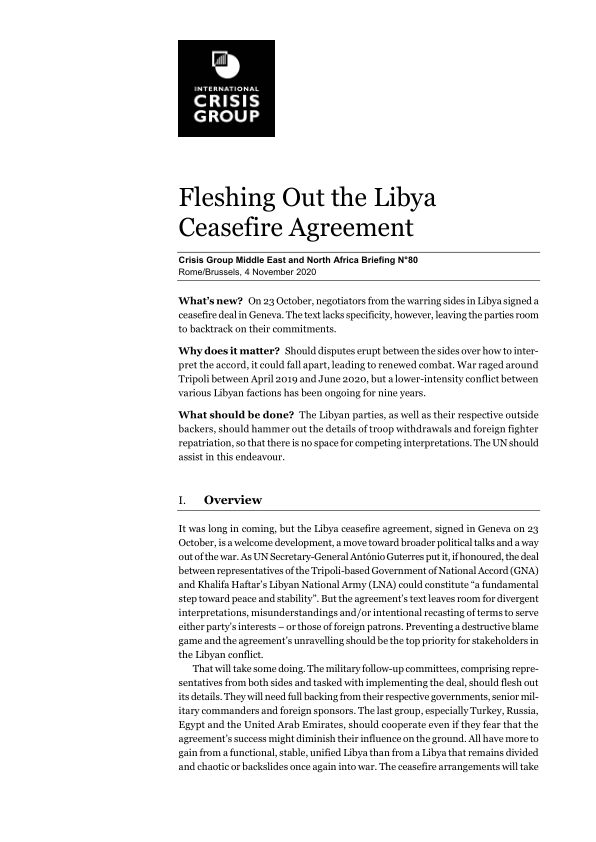 On 23 October, negotiators from the warring sides in Libya signed a ceasefire deal in Geneva. The text lacks specificity, however, leaving the parties room to backtrack on their commitments.

Why does it matter?

Should disputes erupt between the sides over how to interpret the accord, it could fall apart, leading to renewed combat. War raged around Tripoli between April 2019 and June 2020, but a lower-intensity conflict between various Libyan factions has been ongoing for nine years.

What should be done?

The Libyan parties, as well as their respective outside backers, should hammer out the details of troop withdrawals and foreign fighter repatriation, so that there is no space for competing interpretations. The UN should assist in this endeavour.

It was long in coming, but the Libya ceasefire agreement, signed in Geneva on 23 October, is a welcome development, a move toward broader political talks and a way out of the war. As UN Secretary-General António Guterres put it, if honoured, the deal between representatives of the Tripoli-based Government of National Accord (GNA) and Khalifa Haftar’s Libyan National Army (LNA) could constitute “a fundamental step toward peace and stability”. But the agreement’s text leaves room for divergent interpretations, misunderstandings and/or intentional recasting of terms to serve either party’s interests – or those of foreign patrons. Preventing a destructive blame game and the agreement’s unravelling should be the top priority for stakeholders in the Libyan conflict.

That will take some doing. The military follow-up committees, comprising representatives from both sides and tasked with implementing the deal, should flesh out its details. They will need full backing from their respective governments, senior military commanders and foreign sponsors. The last group, especially Turkey, Russia, Egypt and the United Arab Emirates, should cooperate even if they fear that the agreement’s success might diminish their influence on the ground. All have more to gain from a functional, stable, unified Libya than from a Libya that remains divided and chaotic or backslides once again into war. The ceasefire arrangements will take time to carry out and will require strong UN Security Council backing, including the establishment of a monitoring mechanism. But immediate tangible progress in defining and implementing each side’s ceasefire commitments is also necessary, so as to create the right conditions for UN-backed political talks scheduled for November.