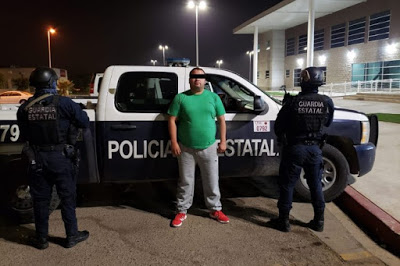 In a joint operation between the
State Attorney General’s Office (FGE) and the National Guard (GN), they
arrested Miguel “N” alias “El Pin”, considered a generator of violence in the
port of Ensenada, according to a statement sent by authorities.

So far this year, a total of 276
intentional homicides have been registered in the Ensenada municipality,
exceeding the 2019 figure that reached 275 murders. (including the recent
killings of a San Diego couple)

The prosecution mentioned that
this subject was in possession of a long weapon, a pistol, methamphetamine,
marijuana and police plates.

After a Control Judge granted the
search warrant for the address marked 196 Librado Street in the Punta Banda 1
neighborhood, a joint operation was carried out in which the State Security and
Investigation Guard (GESI ) and staff of the Special Prosecutor’s Office
against the crime of drug trafficking.

This Tuesday, September 25, the
operation was carried out and a man who identified himself as Miguel “N” alias
“El Pin”, originally from Ensenada, was captured on the premises. He has a
criminal record dated 2010, 2011 and 2013, in addition to being singled out in
citizen complaints as an alleged drug dealer.

Miguel N alias “El Pin” is
considered one of those responsible for the current wave of homicidal violence
in Ensenada, it is presumed that he is part of a criminal cell whose main areas
of operation are the Punta Banda I, II and III colonias, in addition to
maintaining a fight for the sale of drugs in the port.

According to information from the
GESI, the detainee has the function of executing rivals of criminal gangs, and
controlling retail drug outlets in Ensenada.

The subject made illegal use of
fake police badges to intimidate citizens and commit criminal activities with
the impunity, to avoid being reported.