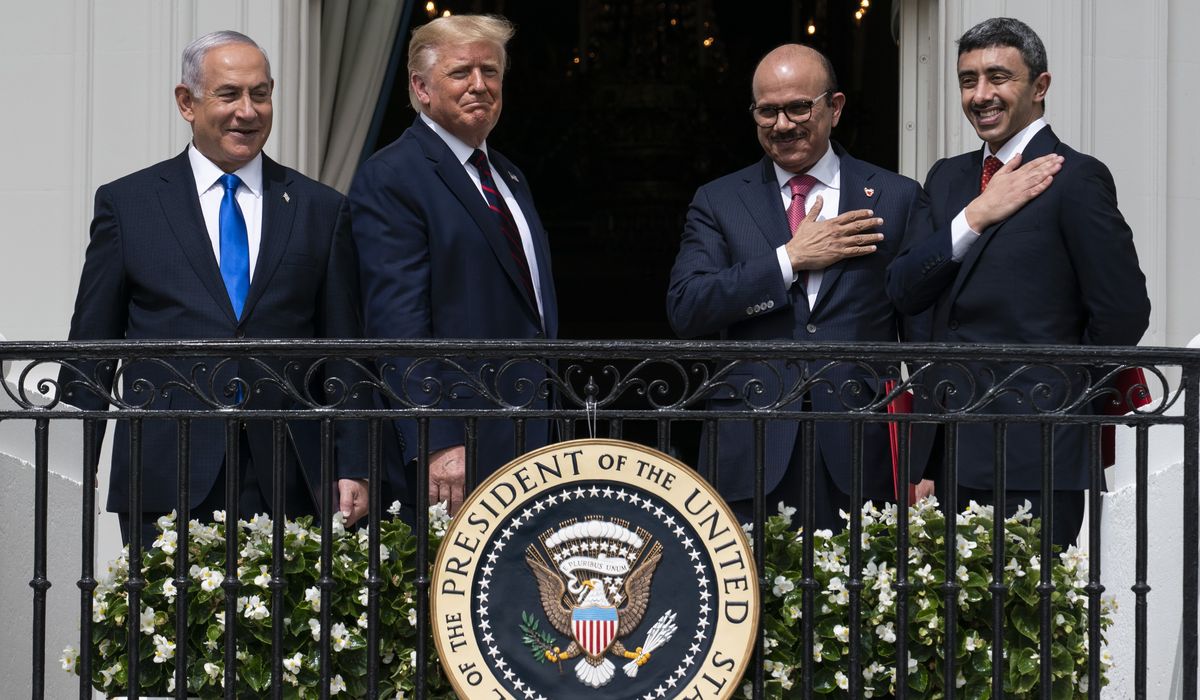 As we mark the end of a presidential campaign dominated by hyper-partisan debate on domestic issues, let’s not forget that just a couple of months ago the Trump administration brokered an unexpected and remarkable diplomatic breakthrough in the Middle East.

Secretary Mike Pompeo and his dedicated State Department team deftly midwifed the diplomatic engagement between Israel and the UAE, most notably during the U.S.–led counter-Iran conference in Warsaw and in subsequent behind-the-scenes meetings, which resulted in September’s Abraham Accords.

A shared interest in countering Tehran, which Washington considers the world’s leading state sponsor of terrorism and a regime with a growing ballistic missile capability and nuclear aspirations, was critical to driving the UAE, Bahrain and Israel to move to establish full diplomatic relations.

Delegations from Israel and the UAE are negotiating on issues such as investment, tourism, direct flights, security, telecommunications and the opening of embassies.

At the signing ceremony, Mr. Trump remarked that the world was witnessing a “new dawn” in the Middle East. The UAE is now poised to purchase high-tech U.S. weapons, including advanced drones and F-35 fighter planes.

With the Palestinians no longer holding veto power over the Arab world’s national security strategy, the accords demonstrated Israel could build diplomatic, trade and security relationships with the UAE, an increasingly powerful and influential Gulf State, without first settling the Palestinian conflict. Israel will look to develop commercial and financial ties with its other Arab neighbors, which should have the positive ancillary result of countering China’s economic push in the region.

Resetting his country’s foreign policy in such an unprecedented direction not without political risk, so Abu Dhabi Crown Prince Mohamad bin Zayed deserves the highest accolades for the sort of visionary leadership on which the future prosperity and peace of the Middle East will depend.

Becoming the first Gulf State and only the third Arab nation to open relations with Israel, the UAE is poised to expand its already considerable influence in the region and beyond. Although the Emirates’ oil reserves are the sixth largest in the world and its natural gas reserves the seventh, the national economy is the most diversified in the Gulf Cooperation Council (GCC). Dubai is an internationally recognized financial and trade hub.

The UAE is the only country in the Middle East which has a U.S. border pre-clearance, which U.S. Customs and Border Protection offices staff at the ultramodern airport in Abu Dhabi.

During the past few years, the UAE has significantly upgraded its military capability. Dubbed the “Little Sparta” by the Pentagon, UAE armed forces are equipped with the most modern military equipment and implement highly sophisticated battlefield tactics. The UAE has been especially assertive in the region, including in conflicts in Libya and Yemen.

I know first-hand, based on my experience working with UAE national security officials while serving as the chief of CIA’s Middle East Division, that the UAE is one of this country’s most trusted and valued counterterrorism partners.

The UAE has also taken steps to improve its treatment of women and migrant workers as well as strengthen freedoms of the press and assembly. But it is the UAE judicial system, which will be in the spotlight because of its impact on the global trade and commerce, where the Abraham Accords have the potential to provide a turbo boost to reform.

In one recent high-profile case, the Dubai Court of Cassation rejected an appeal by Tatiana Akhemdova, the former wife of Farkhad Akhemodov, an ally of Russian President Vladimir Putin. After the couple divorced in 2014, Mrs. Akhemdova’s legal team demanded custody of her ex-husband’s super yacht MV Luna, which the London High Court in 2016 awarded to her as part of an approximately $500 million settlement.

The size of the divorce settlement might have been what sparked global news coverage, but it was the Dubai court’s decision claiming the London High Court ruling was not enforceable in the UAE — because it was conflicted with Islamic sharia law and the UAE’s own personal status law — which unnerved international investors and business.

The question going forward is whether the dissonant legal rulings might be a harbinger of future judicial conflict.

The Abraham Accords would never have happened without deep mutual respect for cross-cultural, ethnic and religious differences among the signatories. But the agreement’s ultimate value will depend as much on resolving any potential legal discord, which would obstruct its ability of the Trump administration’s breakthrough to serve as powerful force multiplier for commerce and a boost to cooperation on pressing diplomatic and security issues.

• Daniel N. Hoffman is a retired clandestine services officer and former chief of station with the CIA. His combined 30 years of government service included high-level overseas and domestic assignments. He has been a Fox News contributor since May 2018. Follow him on Twitter @DanielHoffmanDC.