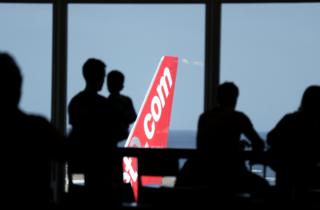 Jet2 planes heading to Spain have been turned around in mid-air as the airline cancelled all flights to the mainland, Balearic Islands and the Canary Islands because of coronavirus.

Infections in Spain have risen sharply and thousands of people have been placed in lockdown.

The country’s death toll has reached 120 and it is set to enter a two-week state of emergency.

Jet2 said the health and safety of its customers was its number-one priority.

A further 22 new cases have been confirmed in Wales, bringing the confirmed total in the UK to 820. A total of 11 people have died.

But the government said on Friday it estimated the true number of cases to be around 5,000 to 10,000.

Jet2 is based at nine UK airports and flies to destinations including Alicante, Malaga and Lanzarote.

The airline said the decision to cancel flights, which would take immediate effect, was in response to Spain’s decision to shut bars, restaurants, shops and activities.

It said it was liaising with customers who were already in Spain.

“We know these local measures will have a significant impact on our customers’ holidays, which is why we have taken this decision,” the spokesperson added.

“This is a fast-moving and complex situation and we are reviewing our programme as a matter of urgency, so that we can fly customers back to the UK.”

On Friday, British Airways warned it would need to ground flights ‘like never before’ and lay off staff in response to the coronavirus. And Ryanair told staff they might be forced to take leave from Monday.

Jet2’s announcement comes as government sources said mass gatherings might soon be banned in the UK to ease pressure on emergency services.

Scores of major sporting and cultural events have already been cancelled across the country in response to the pandemic.

Many sports bodies did not wait for a government directive and have already suspended competitions amid the virus outbreak.

Prominent events still set to go ahead include the Grand National in April, the 75th anniversary VE Day commemorations and Chelsea Flower Show in May, and Glastonbury Festival in June.

It is thought a ban could start to take effect as early as next weekend, although exact timescales are not clear.

October 15, 2021Comments Off on Military seized 233 kilos of glass and 23 of marijuana in Ensenada

October 15, 2021Comments Off on Military seized 233 kilos of glass and 23 of marijuana in Ensenada
Advertise Here for only $299 mo.
Unlimited cpc
Adspace ID5