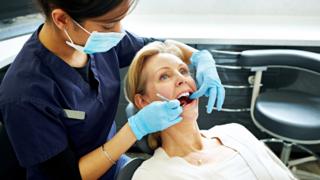 Dentists are “firefighting” to deal with a “huge backlog” and will not catch up until 2021, the Welsh general practitioners committee chairman said.

Tom Bysouth also warned many of Wales’ 500 surgeries were facing the threat of redundancies or even closure.

He said untreated fillings could make teeth irreparable with signs of mouth cancer not being picked up.

The British Dental Association called for support, saying if practices fail, patients will have “nowhere to go”.

“It will take a long time to catch up. Effectively, if we were acting in normal circumstances, it would take at least another six months,” Mr Bysouth said.

“We’re prioritising the more urgent care – but as an example, I took four people off our fillings list yesterday, and put three on.

Mr Bysouth is also concerned that, with people not having routine check-ups, signs of mouth cancer may be missed and fillings will get worse, making teeth irreparable.

“Before lockdown, a typical practice with three dentists would see around 60 to 80 people a day, but that dramatically reduced over lockdown in order to comply with social distancing measures,” he said.

Some had been seeing as few as 10 a day when they reopened because of Welsh Government rules around ventilating surgeries.

But new guidelines that came into effect in August meant a new patient can now be seen every 20 minutes not every hour, greatly increasing the number.

Mr Bysouth estimates there are about 500 practices in Wales, the vast majority of which carry out a mixture of NHS and private work.

However, with government financial support only available for NHS work, he believed those that did less of it were in a “precarious” position.

He said: “There is a risk some may have to close, let staff go or reduce their hours. Like any business model, it needs to be viable. They are as vulnerable as any business.

“People already face a 90-minute round trip in parts of Wales and 15% of practices are taking on new patients. And this was pre-Covid.”

‘I need three teeth out’

Maxine Bullock, from Llantrisant, is hoping to finally have teeth out in October after waiting in “horrendous” pain for more than six months.

“My appointment was due three days after lockdown. I now need three teeth out not two… and for the last three months its been terrible,” she said.

“Every time I ring, it goes to the end of the next month.”

Sue O’Connor, from Welshpool, has been waiting since last October to have a wisdom tooth removed, but lockdown has caused even more delay.

“The tooth they were trying to save is now broken with half missing,” she said.

Melanie Goodridge, from Fishguard, said: “I have a broken tooth and it’s sharp and cutting my tongue and I can’t eat and can just about swallow. They told me to call back in three weeks.”

The BDA estimates during lockdown patients seen on the NHS fell by as much as 98% and with practices paid for each one treated, for many this makes it “impossible to stay afloat” without help.

“NHS practices have been offered support,” a spokeswoman said.

“But most practices are mixed – doing both private and NHS work. There’s been no meaningful help for private practice.

“If these practices fail, their patients have nowhere to go.”

The BDA called for rates holidays for private dentists, the same enjoyed by other businesses, and said the end of the furlough scheme would be a “a major challenge” for them as they are operate at “a fraction of capacity”.

A Welsh Government spokesman said it had created the most generous support package in the UK to help businesses, but added: “It is clear the UK government needs to step up and provide additional funding to help businesses through this pandemic.”

The UK Treasury said its furlough and self-employment support schemes had protected dental jobs, and added that firms would get a £1,000 bonus for each member of staff retained.