Weekend 2 of the world-famous music and arts festival kicks off Friday, attracting hundreds of thousands music lovers, fashionistas and stars to the Southern California desert for the next three days.

Ariana Grande, Childish Gambino and Tame Impala nabbed top billing for the event, and other scheduled performers include Kacey Musgraves, Janelle Monáe, J Balvin and Idris Elba. On Sunday, April 21 Kanye West is set to hold a Coachella-inspired version of his “Sunday Service” gathering for attendees.

But these days, Coachella is about so much more than the music. Not only has it become the destination for fashion trends to break ground, but many of your favorite celebs consider it an annual tradition to hit up the exclusive party circuit and rock out to their favorite artists. That’s why E! News is granting you a behind-the-scenes look at the star-studded fest.

Check out every single celeb sighting at Coachella below:

The country music starlet brings “Golden Hour” to the desert during Weekend 2.

The Vampire Diaries star kicks back on her way to the Empire Polo Fields during Day 1 of Weekend 2.

An angel in the desert! The Victoria’s Secret model enjoys a day by the pool before heading into Weekend 2 of Coachella.

The couple that attends Coachella together, stays together.

The pop music sensation takes the stage for her headlining performance on Day 3.

The breakout artist of Coachella 2019 flashes her signature smile backstage.

Babe alert! The supermodel is all smiles at Revolve Festival.

The Bachelor alum stuns in a one piece as she hangs poolside at the Neutrogena Hydro Boost Haus in Palm Springs.

One of the O.G. celebs to ever attend Coachella looks oh-so cool on Day 2.

The DJ shows kicks back before taking the stage.

The supermodel looks cool in blue jeans, a denim jacket, corset top and red Vans at a Levi’s party on Saturday.

The heiress and reality star strikes a pose at the Neon Carnival, presented by Levi’s.

The supermodel arrives in style to the Poppy x Google “Midnight Bloom” party in the Coachella Valley.

The hot Hollywood couple meets up with Rocsi Diaz while visiting the Lyt x LA Weekly Festival Hotel held at the Korakai Pensione.

The model meets up with the Vanderpump Rules fan-favorite at the Bondi Sands Aero launch party.

Time for a pool party! The actress stops by the the Galore Coachella party where guests snacked on Butterfinger Candy Pop and picked up CBD drops from PureKana.

The world-famous DJ is spotted at a top-secret party celebrating the new cannabis brand Merajuana by Pizzaslime.

Hannah G. in the house! The Bachelor star brings the heat in a pair of denim shorts and a lace bodysuit.

The actress and her boyfriend pack on the PDA.

The world-famous cosmetics mogul stops for a selfie with the YouTube personality.

The Hollywood couple stops by the Harvest House of Cannabis with Rolling Stone Live during weekend one.

The D.J. and fashion designer preps for his set on Day 2.

An icon in the desert!

The supermodel chows down on some McDonald’s fries at the Bootsy Bellows Pool Party, presented by the fast food chain and PacSun,

The two bring their love back to Coachella. They had first sparked romance rumors at the festival in 2017.

The pop star snaps a selfie before heading to the festival grounds with beau Orlando Bloom.

The two check out at Virgil Abloh‘s set.

The High School Musical actress and singer kicks back with a can of Cupcake Rosé.

Bieber, who attended the festival with Kendall Jenner, runs into sister Kylie Jenner‘s estranged BFF Jordyn Woods, who was exiled from the Kardashian-Jenner family following the Tristan Thompson cheating scandal.

The model and daughter of the late Michael Jackson appears with her boyfriend and Soundflowers band mate.

“You ready @coachella ?????? I am!!!!! Game face. Let’s get it,” the British actor and DJ captioned this selfie before his performance.

The newlyweds are all smiles at the Poolside with H&M at Sparrow’s Lodge event on April 13.

The supermodel is all about color for her Coachella look on Day 1.

The Pretty Little Liars star is back in black at a Coachella party on Saturday, April 13.

Before joining Jaden Smith on stage, the singer shows off her toned body in a white crop top and red pants at the YouTube Music Artist Lounge.

One of the fashion queens of Coachella looks trendy in ripped jeans, a bandeau top and Sunday Somewhere sunglasses. 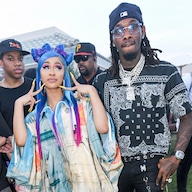 Stay tuned to E! News for around-the-clock coverage of Coachella 2019!

Don’t miss E! News every weeknight at 7, only on E!

by The Daily US News February 27, 2021Comments Off on Prison massacres in Ecuador leave 79 dead; rumors say it was CJNG vs. Sinaloan proxies

February 27, 2021Comments Off on El Chapo’s Wife Emma Coronel Turned Herself In

February 27, 2021Comments Off on “God’s Will is No Concern of This Congress” – Top Democrat Nadler Derides God (VIDEO)

by The Daily US News February 27, 2021Comments Off on Prison massacres in Ecuador leave 79 dead; rumors say it was CJNG vs. Sinaloan proxies

February 27, 2021Comments Off on El Chapo’s Wife Emma Coronel Turned Herself In

Queen urges people to ‘think about others’ by taking Covid jab

Over-40s next in line to get a Covid vaccine

Covid-19 cases discovered on one US Navy ship in Middle East, suspected cases on a second

Mainland China is in no position to take Taiwan by force

TreeCard raises $5.1M seed to plant trees as you spend

Maze raises another $15 million for its user testing platform